The Bremen Town Musicians for Auricolae (violinist Carlos Rubio, cellist Tom Kraines, and Artistic Director David Yang, putting down his viola to assume the persona of the irrepressible narrator) will start appearing before school audiences on June 9, 2008, at Media Elementary School and 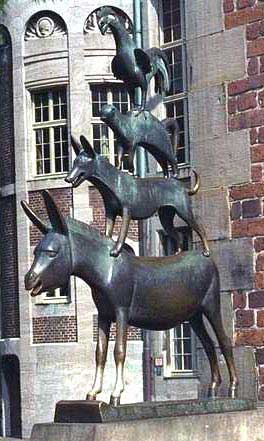 June 12 at Glenwood Elementary School, outside of Philadelphia in the Rose Tree-Media School District; the ofﬁcial press release says that “Mr. Smith…will participate in the performances” but as far as I know, my father won’t be there; everything else in the release is true; Auricolae means “little ears,” but you knew that…

These guys are something, Auricolae that is. Auricolae means “little ears,” but you knew that. They commissioned me to set the story of The Bremen Town Musicians for them, “them” meaning violin, cello, and narrator.
Musicopia is the conduit organization, and the American Composers Forum, Philadelphia Chapter, partially supported it through their Community Partners project. Auricolae already had commissioned pieces from Philadelphia composers Bob Capanna, Danny Dorff, Eric Sessler, and a dandy one by the Music Director himself, David Yang.

The Bremen story was David’s idea as I recall, but I knew it from a videotape we bought for our oldest daughter many years ago, and I worked up a version of the text (from a P.D. source I found, always the composer’s grail) and began composing. After completing the work in a few weeks, which is for me a remarkably short time, I sent PDFs to the group. I received feedback and answered questions on some small matters of voicing and tempos, and I incorporated some edits into the music and text. The thing with children’s pieces, and Auricolae knows this from six years’ experience and hundreds of shows, is timing, timing, timing.

A rehearsal, then four performances, at Media and Glenwood Elementary Schools in Delaware County, just southwest of Philadelphia. K to 2nd-grade, and 3rd- to 5th-grade assemblies. David is a trouper, runs the show with zest and humor. The children were very interested in what my part in it was, what kind of music I like (“Brahms First Symphony” I answered at one and got a big “Yay! He’s my favorite” from a 3rd-grade girl), how did I come up with different music for the animals, how did I like the performance, were the “interrupting” parts intentional, was I famous (golly, that was an easy one), and could we all come back for another concert?

Auricolae connects with children because the players—Carlos Rubio on violin and Tom Kraines, cello—are gifted and friendly and funny, the stories are interesting and move along (mine’s about 10 minutes), and the music (I heard four pieces in addition to mine) is fresh and not pandering. The children seemed to like seeing a real composer. And there’s David Yang, all whirlwind formidable.