God So Loved the World

Jackie and I spent last week at the Sacred Music Colloquium, hosted at Loyola University in Chicago by the Church Music Association of America. We travelled there by sleeper train like William Powell and Myrna Loy, our adventures including breaking bread in the dining car with a West Virginia state politician, who explained—only after prodding by me, I must add—the intricacies of a particular tax issue. I admit I remain unconvinced as to the value of his proposed legislation, but isn’t it nice to hear the views of someone who has invested time and careful thought to a position. If nothing else, it causes one’s own views to be sharpened by the exchange.

The Colloquium is something Jackie has wanted to attend for a while, we were able to arrange our schedules, so—working in an extra day for Amtrak to get there (figuring: when would we have the chance to do this again?)—we went ahead. The CMAA is a Catholic organization with a strong emphasis on Gregorian chant and spreading the Latin Rite. They could not have been nicer to these Lutherans. We’re all keenly interested, from our different domains, in the resuscitation and creation of church music that is beautiful and sacred.

We sang polyphonic masses and learned some of the inner workings of chant (emphasis on some; this is a field one could plow for a lifetime and never get to the end of); the faculty Jackie and I were happy to work with included Horst Buchholz, Wilko Brouwers, David Hughes, and Kurt Poterack. These and all the other faculty are tremendously gifted and dedicated. I am convinced more than ever that in the singing of chant one learns everything one needs to know about music.

William Mahrt spoke about church music and as his points mirrored what I wrote here five years ago, I thought he was, of course, brilliant. In fact, I had stumbled upon points Dr. Mahrt and many other very smart folks not only have known for a long time, but have stated much better than I. 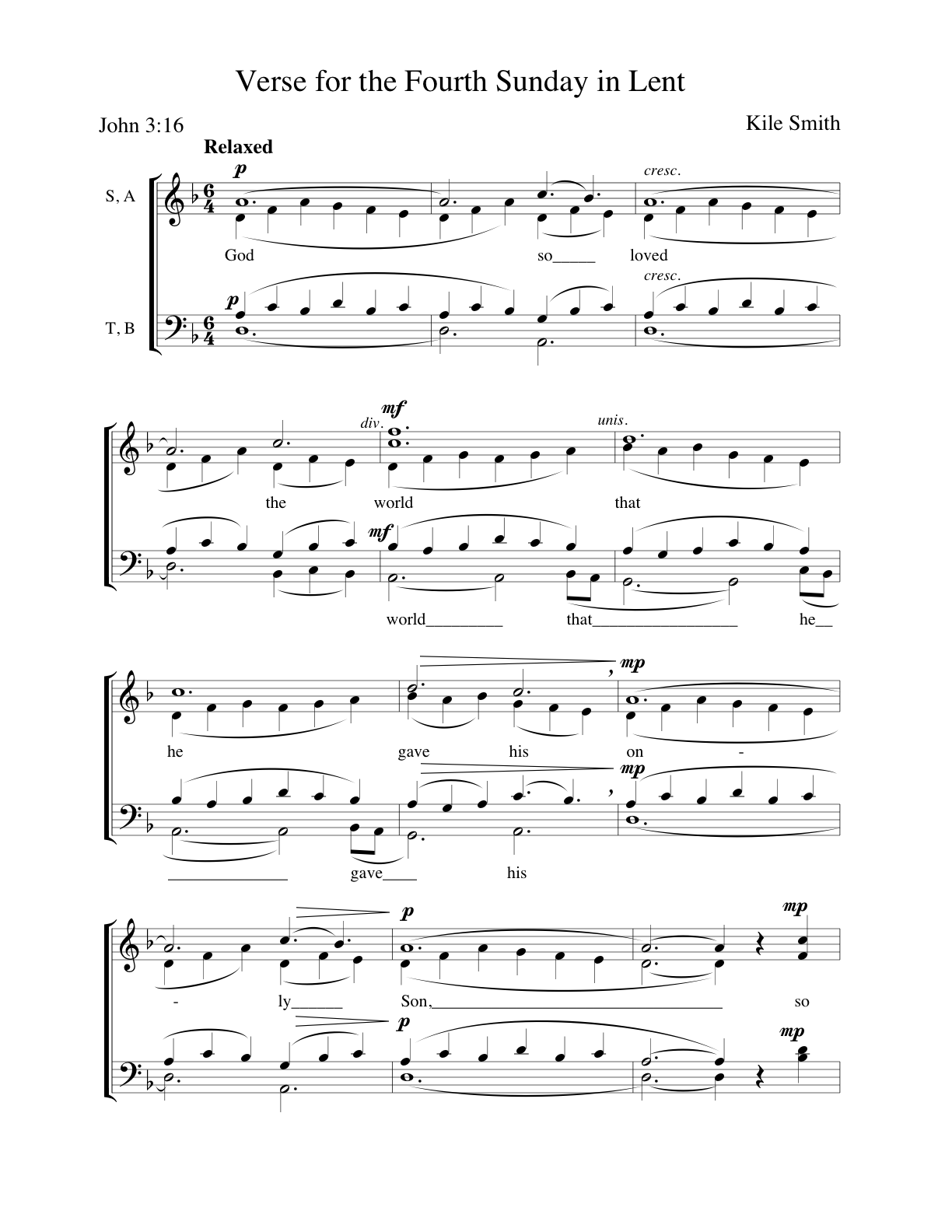 David Hughes also facilitated the new music reading session, the presence of which was a pleasant surprise to me about a week before we left. I brought along copies of God so loved the world (click on the music, left, for a pdf of the complete piece). I set it a few years ago when that text was the appointed Gradual Verse for the 4th Sunday in Lent, for Lutherans. The texts have since been shifted around and it’s no longer the 4th Lent verse for anyone, I believe, but there ought to be room for John 3:16 somewhere in the liturgy, I should think. David sight-read all the scores at the piano, and mostly, we composers conducted our own pieces. This included the irrepressible Michael Lawrence, who ﬁnished composing a Mass section an hour before the reading (he also played the organ and lectured that week on the role of cantors). I was glad finally to meet him. We only live in the same city! So we had to go to Chicago to meet. I conducted my verse in 6 for the large number of singers, but for most groups, in 2 would probably be better. Jackie thinks it should be in 2 no matter what and you know, she’s usually right.

Here’s a recording made last year, Matt Glandorf conducting a small group from the Choral Arts Society of Philadelphia:

Feel free to use it and if you do, drop me a line to tell me how it went. Someone suggested that a Latin version would be nice. Have to think about that.

God so loved the world that he gave his only Son, so that whoever believes in him shall not perish but have everlasting life.