Shall the Blessed Saints Surround Us

The story goes that Stalin wanted a national hymn written and asked Shostakovich, “Will three months be enough time?” and that the composer answered, “Five days will do.” 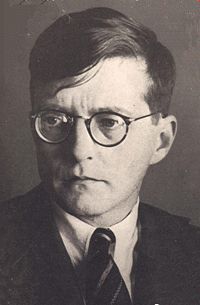 This is how I heard it. Shostakovich didn’t get the job, but I’ve often recalled the story while writing hymns. There are differences between a hymn for church and one for a public occasion, but still enough similarity of purpose that Shostakovich’s retort haunts me. And while I can’t imagine Shostakovich holding it in scorn, there are those who sniff at something that’s “just” a hymn.

Actually, if you had nothing else to do, five days ought to do it.

There’s no rule that a hymn has to be in four parts, I suppose, but that structure seems best suited to provide the necessary support and ﬂexibility for conﬁdent congregational singing of metered texts. This is true whether the parts are actually sung or are simply present in the accompaniment. And what Macaulay Connor says to George Kittredge in The Philadelphia Story—on how one treats a lady, especially under dodgy circumstances—applies equally well to four-part writing: There are rules about that.

It’s not that a cadre of aesthetes gathered in a smoke-filled room just to harrass composers with some artificial ideal of how music should behave. The “rules” are, simply, the realization of how music actually works. Direct fifths, parallel octaves, doubled major thirds or leading tones are usually red flags signaling that a weakness is present. Your job is to ﬁnd it and ﬁx it. Singers feel it when there’s something not quite jake; often that knotty passage snagging rehearsal is exactly where a parallel fifth or a cross-relation has attached itself. Apply antibiotic, stat.

But the rub is that the weakness is usually not the parallel fifth itself. That effect is sometimes exactly what’s needed. No, it is usually something deeper. It is a lack of attention to the melos, a disregard for the flow. And to the ﬂow, oh!, attention must be paid. Maybe that seems too much to make of such a buttoned-down form, but there is electricity, ﬂowing right there under the surface, crackling, daring you to touch it. But you will not touch it, will you, because ﬁxing the problem means going deeper than you thought you could, deeper than you thought there was depth, deeper than what you allowed yourself to believe “just” a hymn could be.

In the early 1980s Jackie and I were organist and choir director, respectively, of Lower Merion Baptist Church in Bryn Mawr. 2008 is their 200th Anniversary, and they’ve asked me to compose something for their Anniversary service on September 14th. Pastor Jonathan Malone suggested something involving the following passage, which I thought was a brilliant choice:

Wherefore seeing we also are compassed about with so great a cloud of witnesses, let us lay aside every weight, and the sin which doth so easily beset us, and let us run with patience the race that is set before us, Looking unto Jesus the author and ﬁnisher of our faith; who for the joy that was set before him endured the cross, despising the shame, and is set down at the right hand of the throne of God.

I thought that a hymn involving the entire congregation would serve nicely for this occasion, and so I ﬁrst tried to tease out a hymn text from this. Stanzas 1, 2, and 4 were worked out during a June weekend retreat I was fortunate to take part in, and here’s the ﬁnal version:

1. Shall the blessed saints surround us—
All the witnesses around us—
And not guide us on our way?
Yes, the watchful saints around us
Guide and bless as they surround us:
Guide to Jesus every day.

2. Yet the chains of sin are grievous.
Who will from this weight relieve us
As we journey on our way?
Christ is ready to relieve us
From entangling chains so grievous:
Freed by Jesus every day.

3. Christ endured and did precede us,
Cruciﬁed, abused, did lead us
Up to Calvary that day.
He despised the shame to lead us,
To the Father did precede us;
Joyfully He showed the way.

4. With our vision ﬁxed on Jesus,
While the cloud of witness sees us,
Blessings speed us on our way.
Now by faith we run to Jesus,
Author and Perfecter, Jesus,
Only Jesus, every day.

I gave myself over to the rhyme scheme insinuating itself into the ﬁrst stanza, where “surround us” surrounds, and rhymes with “around us.” Or it doesn’t rhyme so much as equal, for which poets may have a term, or maybe it’s just cheating, but in any case the scheme yielded is A¹ A² B A² A¹ B. I carry that through until the last stanza, which I alter slightly for a crescendo on the name of Jesus, allowing the hymn to “look unto” Him. I keep “way” and “day” throughout, and repeat inner words within verses, also, giving what I think is a ﬂavor of a simpler time. It ends up in the meter of 887887, which, as it turns out, is an unusual one, although I didn’t set out to make it unusual.

Here’s a listen to a MIDI version

and the music is below. If you like it, let me know, and feel free to use it. Just give Lower Merion the ﬁrst crack at it on September 14th! 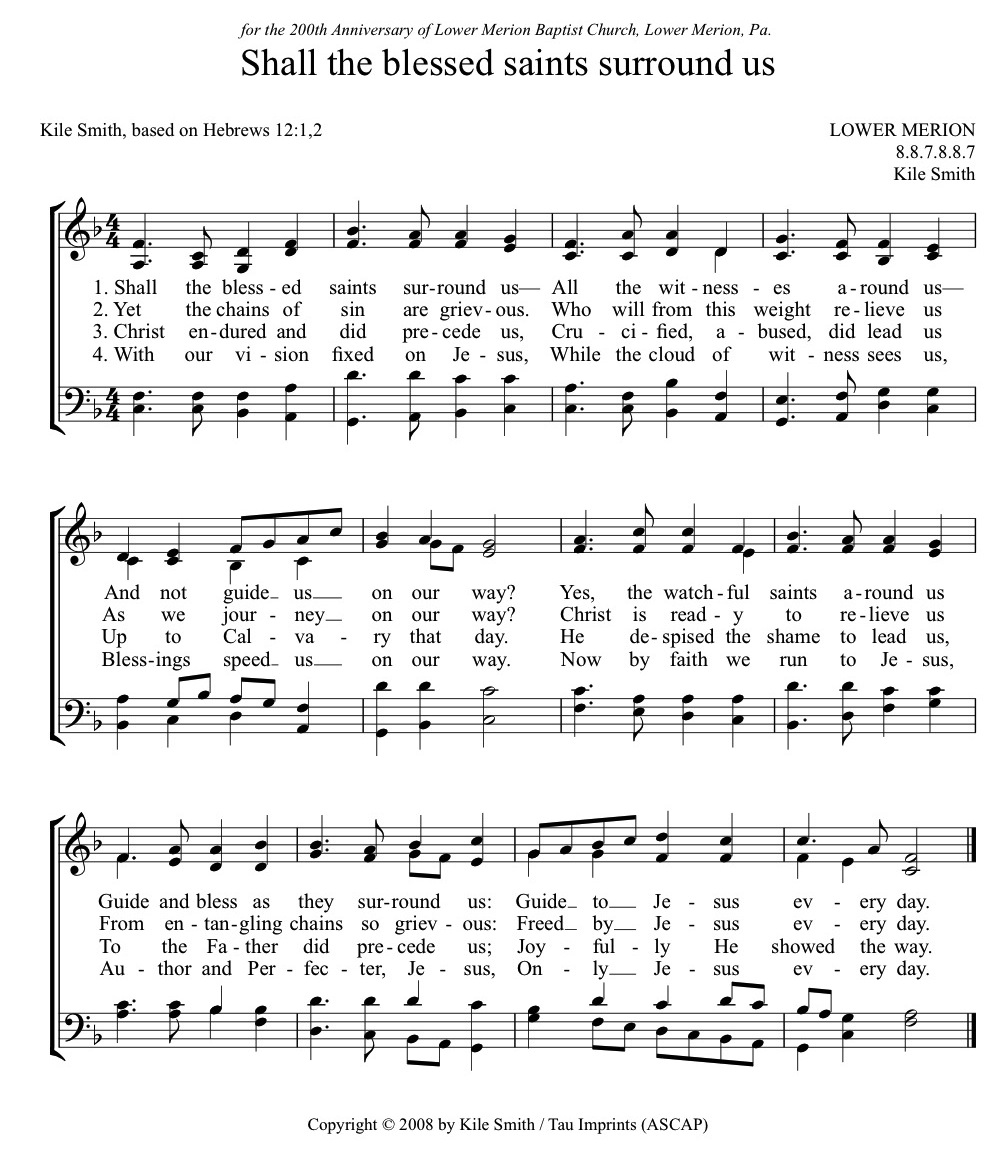