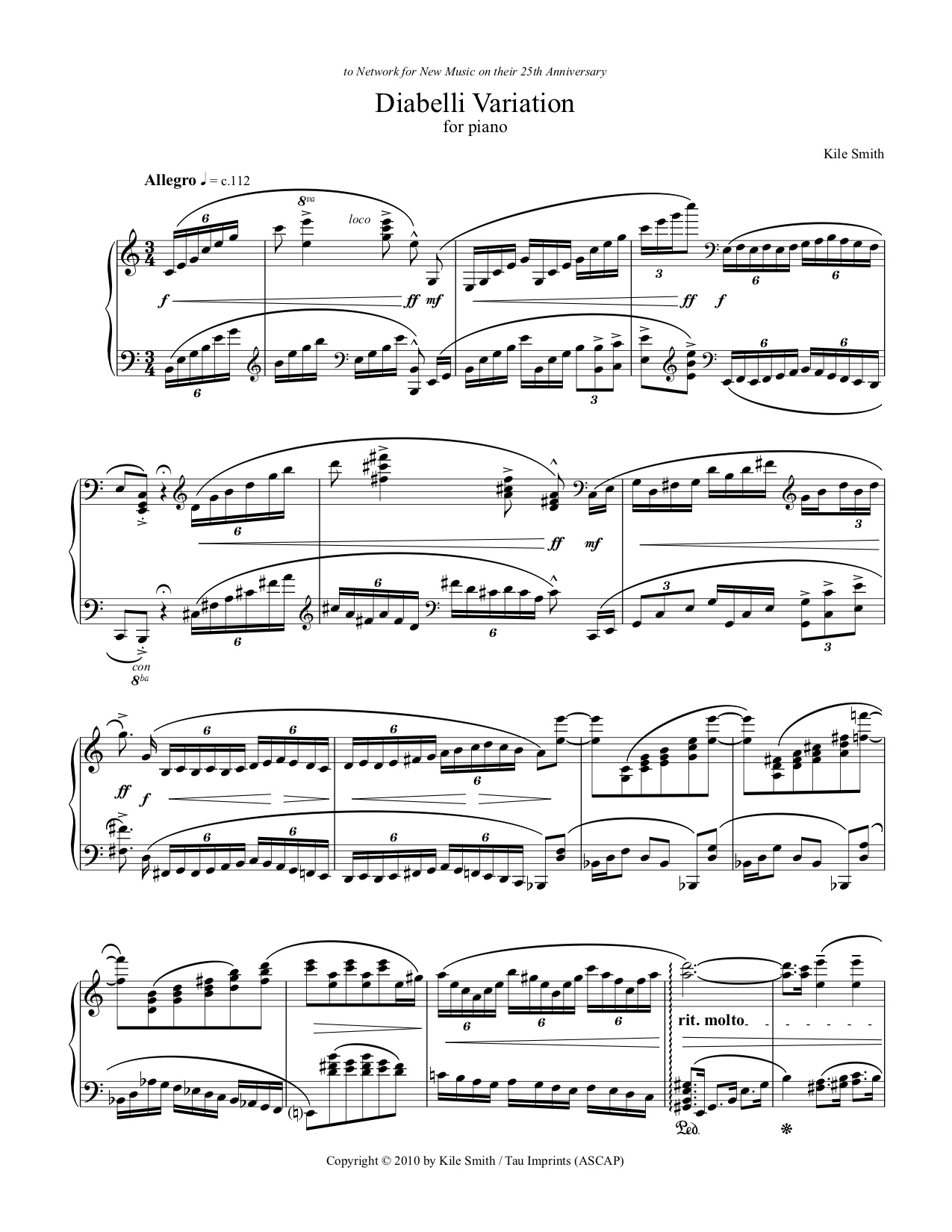 Network for New Music asked me and 24 others* to write new variations on the Diabelli theme to celebrate their 25th Anniversary. Each variation was to be under two minutes, and for any combination of a small choice of instruments. All of the pieces were performed in a sequence of Network’s choosing on 2 May 2010, at Settlement Music School, Queen St., Philadelphia. The final variation was a substantial one by Network’s conductor Jan Krzywicki.

I stayed with solo piano for a few reasons, the first being the challenge of working in Beethoven’s own milieu for the theme. Then there was my itch to write something virtuosic for the instrument. I’ve written only a few pieces—not extravagantly difficult—for solo piano, and so here was a chance to try something out after a long absence. Finally, the pianist was to be Charles Abramovic, and any chance to work with that wonderful artist is a chance devoutly to be wished.

I reacquainted myself with the Beethoven. I don’t know which aspect of his music stuns me more, the depth or the inventiveness, but he emboldened me in the way masters often do. They take us to a meadow of wildflowers, an entire landscape of individual beauties, and say, “Go ahead, pick one, any one. They’re all right there, just for you.”

Diabelli’s child-like tune kept suggesting to me a nugget of two notes, E and F. And then something else. I’m not sure when it came to me, but it was after I had started the piece. The idea presented itself to try to work in a quote of Beethoven’s, as he had honored Mozart by quoting a Leporello aria from Don Giovanni in the 22nd Variation. I thought of what I might quote that would be appropriate to the celebration, and wandered over to the “Ode to Joy” theme. It was obvious that the least snippet of its beginning would be immediately recognizable, and—even better—that it held the exact nugget of the two notes already going through my head (and already in the beginning of the piece). I repeated one note, added the next in line, and E, F became E, E, F, G. Joyful, joyful.

and here’s the 4-page score: