[A revised version of this, without musical examples, published in Broad Street Review 20 Mar 2012 as “Between Bach and ‘O-o-h Child'”]

One of the best pop songs ever produced, “O-o-h Child,” from 1970, is #392 in Rolling Stone’s “500 Greatest Songs of All Time.” It crackles from Stan Vincent’s economical and unusual writing, its eight lines broken into two stanzas that see-saw back and forth. Their first lines:

Back and forth they pivot, the first stanza in F, the second in A-flat, odd for any song, pop or not. Another oddity is the tune’s beginning. It’s on the subdominant, not the tonic. “Ooh” is sung on a D, the third of the B-flat chord, “child” is on F; that’s sweet. 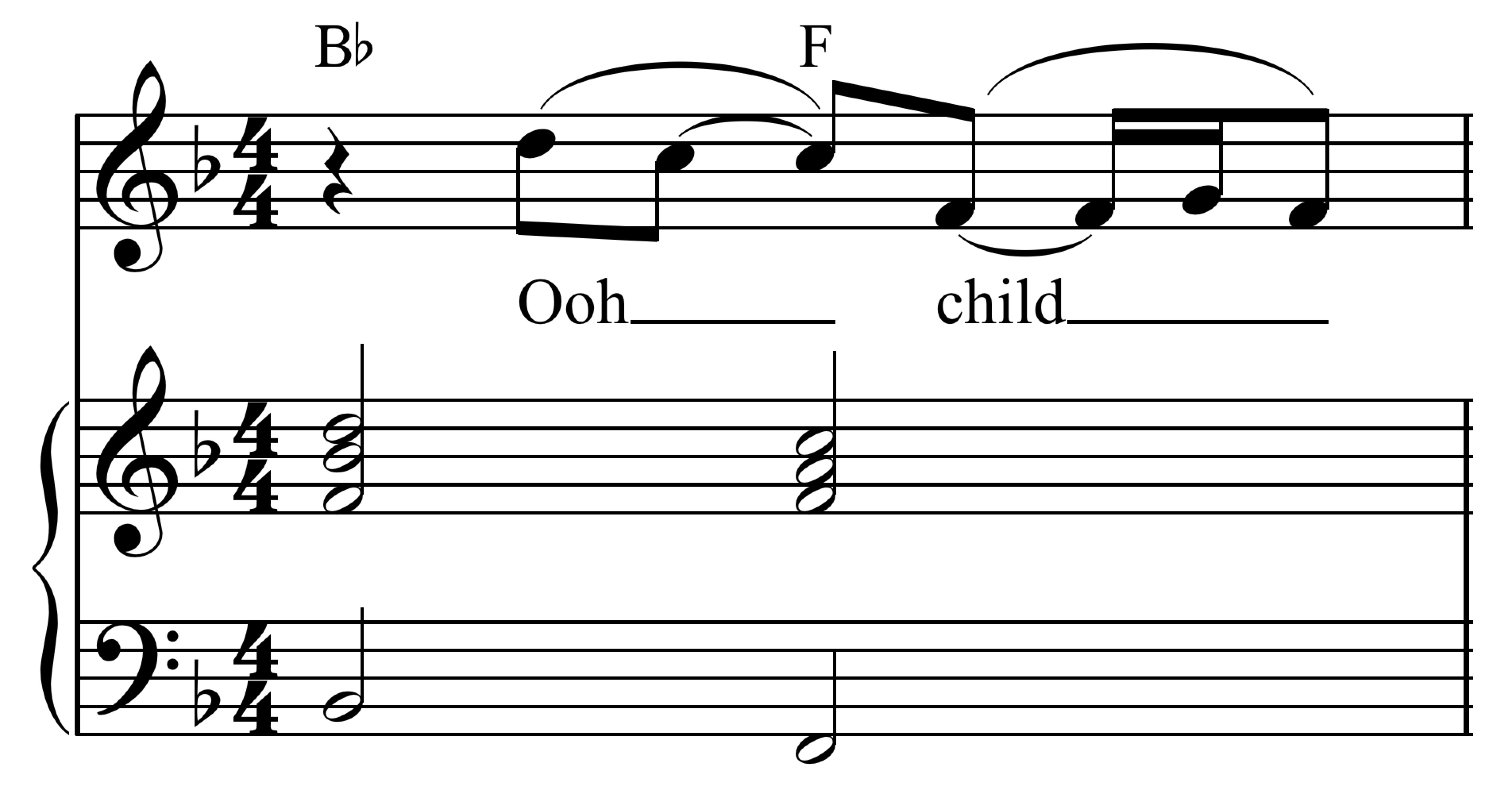 Sweeter still are the shifts between stanzas. Sounding for all the world like a night-club goose-it-up-a-half-step melodrama, the stanza-ending C (F’s dominant) indeed ascends, but the twist is that this D-flat is another subdominant, of A-flat, and so there you are: “Some” is a D-flat chord (sung on its third, which happens to be the tonic F, further camouflaging the shift), and “day” gets you to A-flat. Very sweet, indeed.

At the end of stanza 2, A-flat’s dominant, E-flat, makes a smooth Amen cadence under the sung B-flat, to the B-flat chord—the original subdominant—of “Ooh.”

All of that is delicious, and a brilliant pop vehicle for The Five Stairsteps. Add strings, pump with brass, and the arrangement sparkles. It’d be a top hit right there, but one element lifts it into the jet stream. I felt it when I first heard it in eighth grade, and it came rushing back to me when I heard the song a few weeks ago (on HD radio—I recommend it).

At 13 I liked the energy, but now I can appreciate what a monumental force he is. The first thing that came to me when I heard this song again was, “Who is this guy?” It took a while, because I don’t know of any encyclopedia of session players, but I found him: Bernard Purdie. 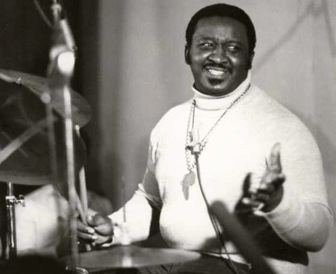 Well, I just found him, but everybody, it seems, knows Bernard Purdie. See how many different folks he’s played for. He’s the laid-back funk shuffle in Steely Dan’s “Home at Last,” and the slap in Aretha’s “Rock Steady.” Miles, Hall & Oates, Percy Sledge… I confess a new-found respect for Van McCoy’s disco doodle “The Hustle.” (I know, I know… but when I heard it recently, I was about to change the station, and then a burst of machine-gun fire got me thinking, “Wait, that’s Purdie!” And sure enough, it is.)

He kicks the door in on “O-o-h Child” and takes over the room. I’m imagining him at the recording session, slamming into fifth gear, swerving into the left lane, and stomping on the gas, with the rest of the band g-forced into their car seats, stealing glances at each other. Hear it for yourself. Look at this Soul Train video (1970 was also Soul Train’s first year). The group is lip-synching of course, and the onstage drummer is just approximating, but the music you hear is the actual release.

Compare that to another TV performance here, on Barbara McNair’s variety show. The drummer’s big and busy, and the choreography sure is frenetic, but there’s no electricity. Purdie’s not there, and neither is the energy.

Bernard Purdie picks up “O-o-h Child” by the scruff of the neck and makes it the song it was meant to be. His tempo: polished granite. In this podcast interview with WFMU’s Michael Shelley, he refers (about a half-hour in) to the struggle to get his tempo across to everyone, and that had to have influenced his playing. His tommy-gun fills are a constant reminder of where the tempo is. Even the cymbal ride under the opening vocal (you can barely hear the 16ths between those rim knocks: tsit-tsit-tsit-tsit) is a friendly reminder from HQ that this is the tempo. It’s soft, insistent, and exactly in place, a steel needle stitching with silk thread. The long runs between stanzas are rivetingly precise, but the real truth lies in those phrase-bridging double- and triple-flams, little giddy-ups that make me smile every time. They aren’t show-off flourishes; they’re horse whips. Tight and righteous, they propel you through the song. And his hi-hat is a smart-bomb, close and hard: small, targeted explosions that make you flinch.

I thought of all this at a recent Baroque concert at church. Our Priscilla came down from New York to play oboe and recorder, James Finegan was the violinist, Ken Borrmann, the harpsichordist, and Jackie sang. But in this kind of music the Bernard Purdie chair belongs to the cellist: in this concert, our middle daughter, 15-year-old Elena. 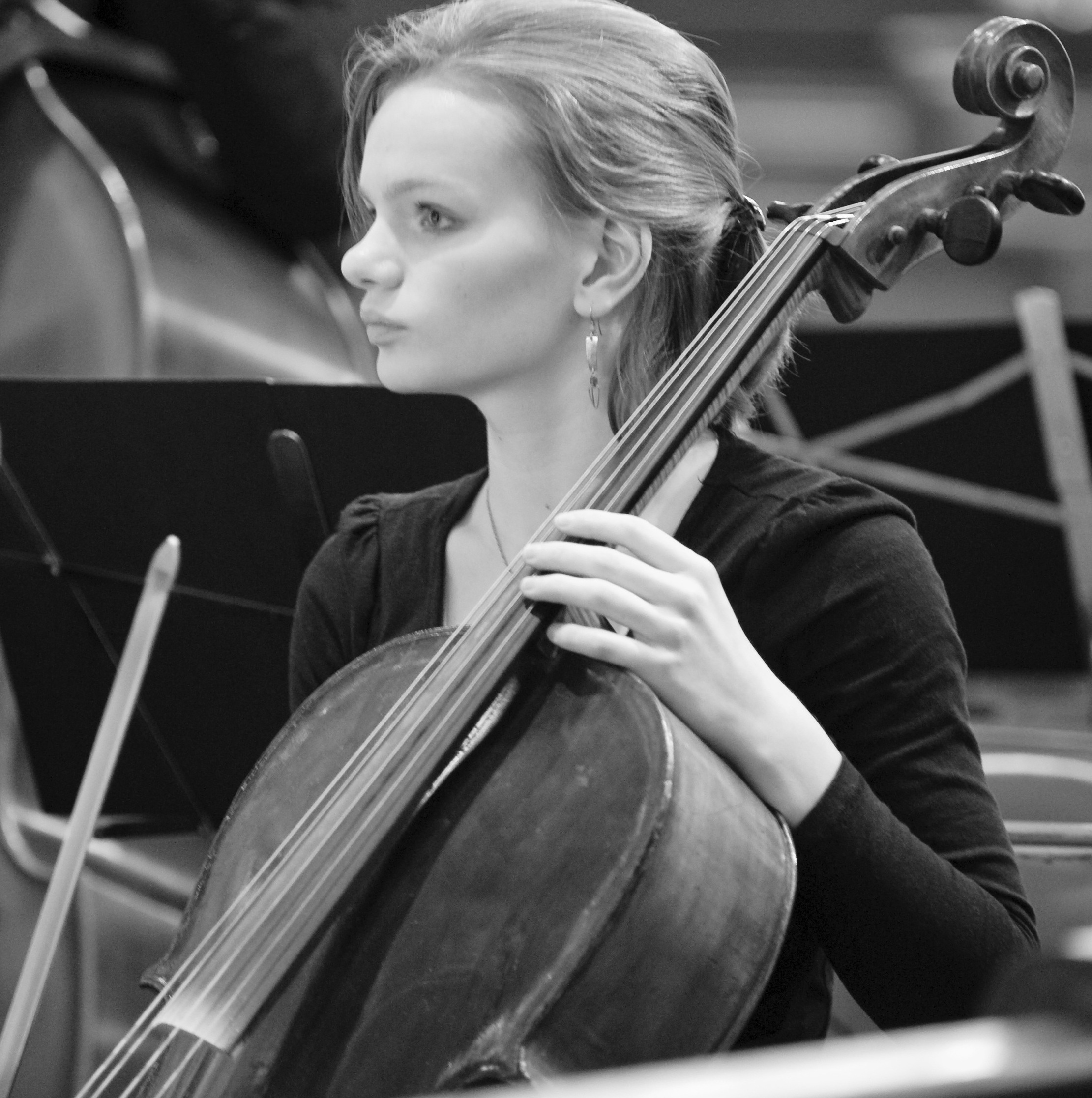 Nellie’s been playing for six years, and it’s been a pleasure beyond describing, seeing her grow as a musician (as we’ve witnessed in Priscilla and are seeing in Martina the horn player, our youngest). She plays in different chamber ensembles, in a youth orchestra, Jackie keeps her busy playing in all sorts of situations in church, and she’s taking the occasional job here and there.

Nellie has exactly the right engine for a cellist, driving without pushing, tempo spot-on. She takes over when necessary, which takes nerve, and lurks in the foliage when called for, which takes humility. It all takes talent, of course, and all musicians need these qualities, but these particular ones often fall to the cellist as priorities, and in quick succession.

There are times when the cellist has to kick in that door and follow George C. Scott’s advice from the opening Patton monologue: “Wade into them! Spill their blood!” But when all is going well, as with this ensemble at this concert of Telemann, Schütz, Johann Nikolaus Hanff, and J.S. Bach, there are no such dramas. Everyone takes care of business; you can follow the eyes and see magic happen.

Jackie programmed the concert to end with “Mein gläubiges Herze” from Bach’s Cantata 68. Here, the cellist is hardly a continuo player anymore but soloist, wildly disproportionate for a soprano aria. It’s the element Bach uses to launch what would be a perfectly fine and beautiful tune into his jet stream. (Frankly, it’s the kind of nutty thing Bach does all the time and that redefines him out of the Baroque.) Here it is, with Concertus Musicus Wien, at perhaps one tick slower than where Jackie, Nellie, et al. performed it.

My faithful heart, rejoice, sing, be merry, your Jesus is here! Away with sorrow, away with lamentation! I shall just say to you: my Jesus is near!

Jackie insisted that Nellie move to the front for this finale. She took her place, looked at Ken, and launched herself, the ensemble, and the piece, proceeding to show us what rejoicing really sounds like. We heard why Bach is great, we heard what a cello can do, and we heard why Nellie should be playing it. Ooh, child.