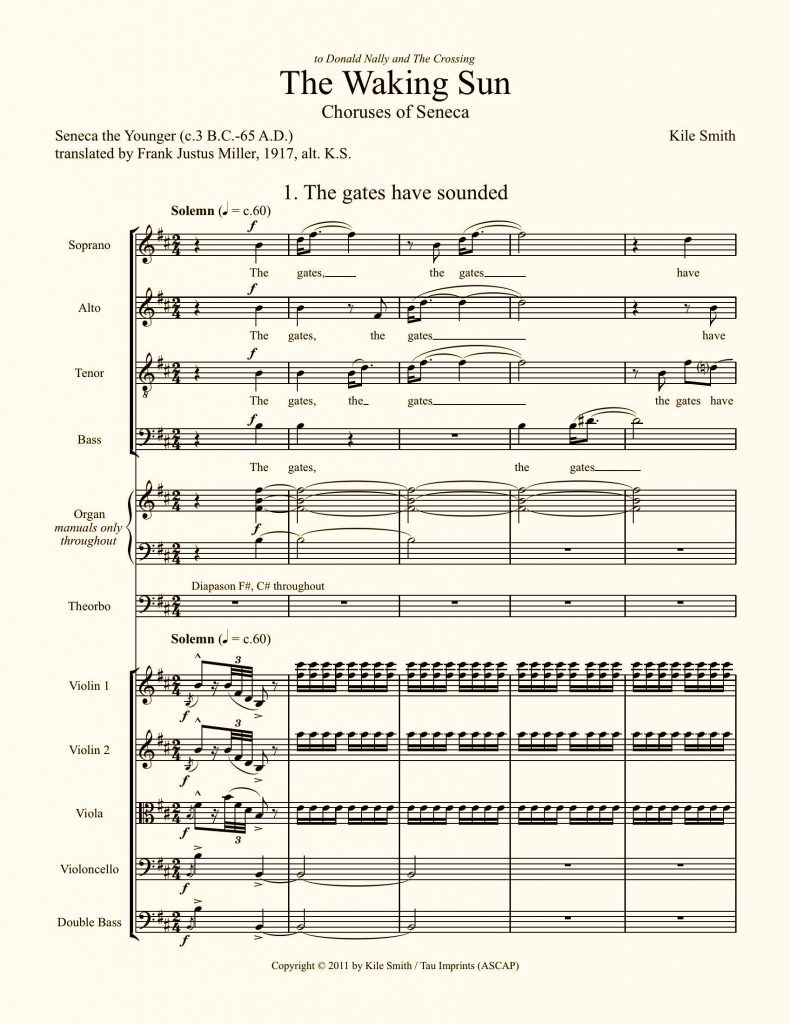 The Waking Sun is my attempt to understand Stoicism. When Donald Nally first asked me to participate in The Crossing’s Seneca project, my first thought was No. I have often wondered why a non-Christian, say, would bother composing a piece with Christian themes, so as a Christian I thought it presumptuous to take on this patron of Stoicism, Seneca the Younger.

[click on the image to the left for the complete score.]

The more I read his work, however, the more attracted I became. He preaches—and a lot of times, it is preaching—a nobility beneficial to anyone. There are parallels to some aspects of Christianity, as others have noted, in the writings of this man living (c.3 B.C.–65 A.D.) at the time of Christ. But I have little interest in setting something just because it’s similar to something else. I wanted to find the thing itself, if I could.

Donald himself gave me the key when he told me what he found compelling in Seneca. It was wrapped up, he said, in a recurring dream he had of being lost in a blinding snowstorm, trying to reach home, with the image of boots crunching ever onward, sinking in, trudging on and on, blind but moving forward. His dream became mine, and Seneca started opening up to me. I remembered the snow and those boots often during the year I’ve been writing this.

I kept to his many plays, away from the essays and letters, and zeroed in on the choruses. Here I found Seneca speaking to me, through their reflection on the action and the state of the characters. A long winnowing process was aided by generous correspondence from the classics scholar Shadi Bartsch, whose many areas of expertise include the writings of Seneca. Her questions helped focus my search for the right texts and my thinking about them. I ended up with six sections that eloquently depict our condition and Stoicism, as I understand them.

The final two sections hint at what I consider to be Seneca’s “answer” to our condition (although he’d shrink from such a word, I’m sure): Take full responsibility without fear, be motivated by love. This is how I read it.

Music, however, teaches nothing, answers nothing. If there is any value in The Waking Sun, it will come from the window opened into that otherness waiting patiently for each of us while we bother with our daily existence. Seneca is this particular window. I’ve tried to peek through and sing what I saw.

The Waking Sun is for SATB choir, positiv organ, theorbo, and a Baroque string quintet. It was commissioned by The Crossing with funding from the National Endowment for the Arts and additional support from the American Composers Forum, Philadelphia Chapter. It premiered 18 June 2011 at the Presbyterian Church of Chestnut Hill, Philadelphia, with The Crossing and Tempesta di Mare, conducted by Donald Nally.

The text is the 1917 English translation of the plays by Frank Justus Miller. I adapted some of the language, usually just snipping here and there for rhythmic purposes. I did, however, perpetrate a wholesale translation of the last section, “While on such beauty the lover gazes,” using the quite unscholarly technique of translating individual words from Latin and then trying to assemble the results into an artful English. With Latin, I am innocent of the tools a real translator would possess, so I hope the result is not too far from what Seneca meant. Below is the complete text, here is a 2019 performance of movement 4, Tantalus, by the Cornell University Chamber Singers, and here’s the complete recording of the premiere by The Crossing:

2. Sport, youth
Sport, youth, ring out your songs. —Medea
Along with you a troop of Bacchanals in Edonian dance beat the ground, now on the peak of Mount Pangaeus, now on the top of Thracian Pindus; now from among the women of Cadmus comes a maenad, impious comrade of Bacchus, with sacred fawn-skins wrapped around her loins. Now their hearts are maddened, and now their hair is flowing; and now, after rending Pentheus limb from limb, the Bacchanals, their bodies freed from the frenzy, look on their infamous deed as though they know it not. —Oedipus

3. That wanton, smiling boy
That wanton, smiling boy, how true he aims his shafts! The wound he deals has no broad front, but eats its way deep into the bone. His madness glides into the marrow; with creeping ﬁre he ravages the veins. His arrows strike the lowest depths and pierce the ocean throng of Nereids; they cannot ease their heat with all the water in the sea. He kindles the ﬁerce flames of youth and wakes again, in worn-out age, extinguished ﬁres; he smites maids’ breasts with unknown heat, and bids the very gods leave heaven in borrowed forms on earth to dwell. He claims as his own all nature; nothing is exempt. —Phaedra

4. Weary, with empty throat, stands Tantalus
Weary, with empty throat, stands Tantalus; above his guilty head hangs plenteous food; on either side, with laden boughs, a tree leans over him and, bending and trembling beneath its weight of fruit, makes sport with his wide-straining jaws. He tries no more to touch, he turns away his eyes, he tightly shuts his lips; behind clenched teeth he bars his hunger. Then the whole grove lets down its wealth, and the ripe fruits beckon from above. As his hands stretch toward the mocking gift, the whole harvest of the bending wood leaps up high, out of reach. Then comes a raging thirst, harder to bear than hunger. The poor wretch hurls himself at waves that motion to his lips, but they elude his grasp. Deep from the whirling stream he drinks but dust.—Thyestes Here is a 2019 performance by the Cornell University Chamber Singers.