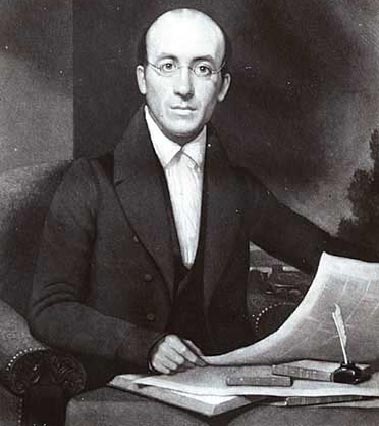 To mark the Tenth Anniversary of the Newburyport Summer Music Festival, Music Director and violist David Yang wanted to commission a work as a special thank-you to the Festival’s home. We decided that a song cycle for baritone and the resident string quartet, featuring texts by Newburyport authors, might be a significant addition to the week’s concerts.

Of the few early suggestions, writings of the self-titled “Lord” Timothy Dexter leaped to the fore. A Pickle for the Knowing Ones, or Plain Truths in a Homespun Dress is delightfully brusque, impassioned, whimsical, and completely innocent of pretense. It is part political screed, part sermon, and part diatribe against anyone who owed him money. Dexter was a barely literate laborer who, through street smarts and astonishing luck in trading, amassed a fortune, giving him entrée into bemused society. His book is a remarkable chunk of writing. It was tempting to give the entire cycle over to Dexter, but he does occupy the middle song of five.

Further research uncovered many possibilities, but I quickly decided on “Annie Lisle,” a popular song by the otherwise unknown Henry S. Thompson. It was so successful that the tune became the melody for dozens of college alma maters. I avoided listening to the music until after composing this, as I had in mind an original tune, which nevertheless is in the mold of a 19th-century American salon piece.

The abolitionist William Lloyd Garrison bookends the cycle, with powerful preaching from his newspaper The Liberator. I quote from the very first and last issues: his 1831 shot across the bow proclaiming his rejection of moderation in the fight against our national tragedy, to his 1865 valedictory, which followed the Thirteenth Amendment’s official eradication of slavery. “I am aware” is an angry recitative; “Spirit of Freedom,” a marching hymn.

That leaves No. 4, “Oh, Andrew,” by the Gothic romantic Harriet Prescott Spofford. It was a choice that surprised me, but which became, I believe, the emotional center of the cycle. Its melodrama mirrors that of No. 2’s “Annie Lisle.” The singer takes on the personas of the girl, the boy, and the narrator, accompanied respectively by the violins, the viola with cello (which invert the violins’ music), and then all together. I was fortunate in the choice of bass-baritone Jeremy Galyon to bring this and all the songs to life. The cycle is written in admiration for the people of Newburyport, about whom Spofford wrote, “These sea-coast people see the world and learn.”

The new, expanded version premieres November 16th at the Newburyport Chamber Music Festival with baritone Randall Scarlata, the Festival String Quartet, and The Candlelight Chorale, Jay Lane, Music Director. David Yang, the Festival’s Artistic Director, is also the Quartet’s violist. The songs are for baritone and string quartet, but now have a chorus on four of the seven for this new unveiling (but optional thereafter). For baritone and string quartet, it is now seven songs, from five, and includes optional chorus on the two new songs and on two of the older ones. It clocks in at about 30 minutes. I originally set texts from authors who lived in Newburyport in past centuries. The two new texts are more contemporary. Tom Coleman, who died only six years ago, wrote “Remember Meho?” for a book of town reminiscences. “Homing In” is from a poem by longtime local newspaperman Bill Plante. Plante’s is a heartfelt longing for a time and for friends that are past. I was struck by its poignancy, but surprised by the same emotion coming to me from Coleman’s, after it first eluded me. I’m so happy to have had the chance from Newburyport to revisit this.

1. I am aware
I am aware that many object to the severity of my language; but is there not cause for severity? I do not wish to think, or to speak, with moderation. No! No! Tell a man whose house is on fire to give a moderate alarm; tell him to moderately rescue his wife from the hands of the ravisher; tell the mother to gradually extricate her baby from the fire—but urge me not to use moderation in a cause like the present. I am aware, and I will be heard.
—Wm. Lloyd Garrison (1805–1879), from The Liberator (1831)

2. Annie Lisle
Down where the waving willows
’Neath the sunbeams smile,
Shadowed o’er the murm’ring waters
Dwelt sweet Annie Lisle;
Pure as the forest lily,
Never thought of guile
Had its home within the bosom
Of sweet Annie Lisle.

Sweet came the hallowed chiming
Of the Sabbath bell,
Borne on the morning breezes
Down the woody dell.
On a bed of pain and anguish
Lay dear Annie Lisle,
Changed were the lovely features,
Gone the happy smile.

“Raise me in your arms, O Mother;
Let me once more look
On the green and waving willows
And the flowing brook.
Hark! the sound of angel music
From the choirs above!
Dearest mother, I am going;
Surely God is love.”

4. Remember Meho?
Remember Meho? He met every train and was at every parade with his camera. He snapped pictures everywhere, but never had any ﬁlm in the camera.
—Tom Coleman (1928-2007)

5. Oh, Andrew
“Oh, Andrew, it was so splendid of you!”
“What was so splendid of me?”
“Standing by him so, standing by the captain when the others left—bringing home the ship!”
“Well, is this all? Ain’t you going to shake hands with me? Ain’t you glad to see me?”
“Oh, Andrew! So glad!” and she turned and let him see the blushing, rosy face, the large, dark, liquid eyes; then overcome, as a sudden shower, the long-lashed eyelids fell, and the face was hidden in a storm of tears. And then, perhaps because he was a sailor, perhaps because he was a man, his arms were round her and he was kissing off those tears, and the little happy body was clinging to him and trembling with joy. As for Andrew—he had not known that he cared for her so much until she turned that tearful, rosy face upon him; now it seemed that he had been hers since time began: he said to himself, and then repeated it to her, that he had loved her always.
—Harriet Prescott Spofford (1835–1921), from Louie (1872)

6. Homing In
Under the roof tops,
beneath the chimney pots,
six thousand of homes,
ninety miles of streets,
fourteen thousand of people
My city, by the measure.

Porky, Butch, Boomer,
Red, Sqwaboo, Sonny
and all the rest calling
across the steaming
summer afternoons.

My City born of mountain
streams led to salt
of sea and marsh,
of glacial soil, and those
who fished the toil of those
come to labor of men and
women in shops shaping
skins to shoes, molasses
to rum, thread to linen,
and silverware for
High Street tables.

My City born of street games—
“Fox in the water, all come across!”
“My goal, one-two-three!”
“Allee Allee in freeeeee!”

My city swimning
through the river waste
on dog day afternoons.

My city calling
across the curbs,
along the wharves,
over the fences,
beneath the scarfing rooftops,
the smoking chimney pots
among the old wards,

calling to all who knew her

7. Spirit of Freedom
Spirit of Freedom! on—
Oh! pause not in thy flight
Till every clime is won
To worship in thy light:
Speed on thy glorious way,
And wake the sleeping lands!
Millions are watching for the ray,
And lift to thee their hands.
Still Onward! be thy cry—
Thy banner on the blast;
And, like a tempest, as thou rushest by,
Despots shall shrink aghast.
On! till thy name is known
Throughout the peopled earth;
On! till thou reign’st alone,
Man’s heritage by birth;
On! till from every vale,
And where the mountains rise,
The beacon lights of Liberty
Shall kindle to the skies!
—Wm. Lloyd Garrison, from The Liberator (1865)