[First published in the Broad Street Review as “Sports and music: a common link” 13 September 2011. Reprinted by permission.] 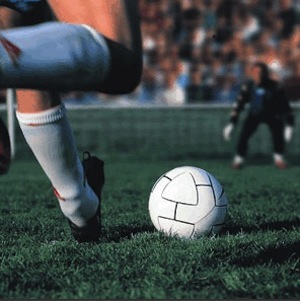 Regulation was over, and the entire game came down to a penalty kick shoot-out. If I stopped this last one, we’d win. If I didn’t, we’d lose.

I put my heels on the goal line, and the rival forward loped the few steps to the ball and launched it. I had guessed correctly—I took a step to my left and dove—and the ball came that way.

Long before I became a composer I played soccer, simply because I loved sports, all sports, whoever was playing what. Baseball, football, track, volleyball, dodgeball, wireball, jailbreak—didn’t matter, I loved all of it.

I was good, too, as far as it went, in my Pennsauken neighborhood, in gym class: In those places I was always the best, or pretty nearly so. I was quick and fearless and could think ahead, and that served me well most of the time.

But when football tryouts came up in junior high, and I wanted to be a wide receiver, like Bob Hayes in Dallas, the World’s Fastest Human, they threw me a couple of passes and I couldn’t catch up to them. So I wasn’t that good, and that was that for football.

I tried soccer. I’d been playing informally for a while and was a goalie because no one else wanted to be a goalie. I wasn’t big and strong, but I was fairly quick and smart, and most of the time that sufficed.

I became the junior varsity goalie. Our team had a good defense and a middling offense, and while I was no star, I stopped my share. We were average, but I hated to lose. I despised every goal scored against me.

So I studied shot percentages. I watched the Flyers goalie Bernie Parent to see how he massaged angles. I waded into corner kick traffic, pushing, jumping, attacking the ball. Three-on-twos, two-on-ones, breakaways, positioning defenders, looking through legs, anticipating: I improved.

All of us in that team improved: We played together better, and we learned. But so did the other teams. We’d win or we’d lose, but we learned not to strut and not to mope, and after every match we cheered the other team’s name, trundled into the showers and went home to do our schoolwork.

Keeping score in a choir

Sports taught me the same thing music teaches me. I’ve sung in choirs all my life, usually in church choirs but here and there alongside folks who sing for a living. In a choir there are no points—no one’s keeping score. Of course you want to sing well, but there’s no perfect performance. Making music together is the thing.

Professionals know this, and while they (like the rest of us) always strive for improvement, a humility and a humanity arise from the performance itself, no matter what happens. The people who actually do the work know this, even though nobody’s keeping score.

In church I’m told that I must pick up my cross daily: If I try to gain the world, I’ll lose my life; but if I die to myself, I’ll find my life. That advice reminds me of sports and music making.

It also reminds me of the story of the tai-chi disciple preparing for his master’s arrival. He sweeps and sweeps the court where he will serve tea. His master arrives and the student shows him how clean it is; even with branches overhead, not one leaf lies on the ground. The master replies, “It is not perfect.”

Sure enough, over in the corner there’s a small twig, so the student hurries over to remove it. The master says again, “It is not perfect.”

The student, distraught, looks at every square foot and can find nothing. Then a thought occurs to him. He reaches up, takes hold of a branch, and shakes it. A few leaves drift to the ground. He looks at his master, who smiles and says, “That’s better.”

The ball was heading to my left. I was diving that way, but it was out of reach. Way out of reach, in fact. Thanks be, it hit the post. But like a heat-seeking missile, it roared straight at me, and before I could react it smacked off my outstretched hand and lazily bounced twice and rolled into the back of the net.

I was incredulous. I had knocked in the opposition’s winning goal. Their team exploded into delirium while I lay there, face in the turf, ashamed.

After a moment, I gathered myself up, and all around me were my teammates, patting me on the back, telling me, “Good try” and “Nothing you could do.”

It didn’t make me feel better right then, but I would remember them for the rest of my life because of it.

Out of the winning team’s triumphal scrum, the forward who had just scored came walking over to me. He knew what had just happened. And in one moment he taught me, as my teammates just had, what character is. The score no longer mattered. The sport had brought us together, and the score had made us work, but after that, it was just the two of us.

And really, that’s all it ever is. That’s what sports teach; that’s what music teaches. He and I together. He came up, looked me in the eye, and put out his hand. “Good job,” he said. I looked at him, and, taking his hand, said, “You, too.”