[Most have now heard the tragic news of the passing of Samuel Hsu, our friend, colleague, and brother, on December 2nd. My…appreciation is such a weak word…some frail thoughts of mine on this truly great man are at the Broad Street Review, first published 6 Dec 2011 as “Samuel Hsu: A polymath’s giant shadow,” and reprinted here by permission. The biggest problem in writing this was deleting things, keeping it under a thousand words. Collegium concerts, walks in Center City, pinball, encounters with street people, hearing him play, watching him play, sitting next to him as he played, and talking, talking, talking deep into the night, drinking tea, breathing and learning, always learning. Rest in the Lord, Sam. See you before too long.] 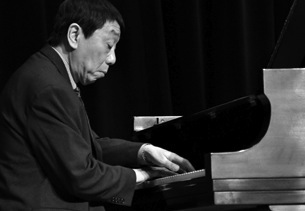 And he was off to the races—conversing with the hot dog vendor, the cab driver at a traffic light, the pizza dough slinger. Sam Hsu’s landlord was Greek, and it seemed that every Greek in Philadelphia knew Sam. I don’t know who enjoyed the conversations more, they or he. The obvious lark of it was that Sam was Chinese…and that his name wasn’t Atanasiu.

Samuel Hsu was a pianist, specifically the last student of the legendary Rosina Lhévinne. He held a Ph. D. in historical musicology. He was Distinguished Professor of Music and chair of Keyboard Studies at Philadelphia Biblical University [now, Cairn University]. On Thursday morning, December 1st, a car struck him while he was walking to Suburban Station to catch the Langhorne train. Sam died the next day at the age of 64. You may not know it, but a great man has been taken from us.

After emigrating from Shanghai, where his parents ran a Christian bookstore, Sam studied Bible and music at Philadelphia College of Bible, as it was then called. After graduating, he skipped a master’s degree and went right to a doctorate at the University of California’s Santa Barbara campus. He started teaching at the Bible College in 1972—a year that represented a continental divide both for him and the school. This brilliant 25-year-old transformed the school from an excellent Bible college to an excellent Bible college that had Dr. Hsu.

From the moment of his arrival there, his name was spoken in hushed tones. But not everyone wanted to take his classes.

My first semester, I wrote a paper about jazz pianists—I forget why. Sam said it was the best paper he had seen from a freshman. (It didn’t occur to me that he had only been there four years.) The grade on this “best” paper? A-minus.

After class I hemmed my way around to asking how one might get an A without the minus. “Oh, for an A,” he replied, “you need to tell me something I don’t know.”

Fat chance. In Sam’s Center City apartment and studio, books were strewn everywhere: fields and mountains of books, books recumbent and rampant. He read two or three at a time, remembering what he read. There was no subject about which Sam didn’t already know more than you, not to mention its relation to subjects you didn’t even know were subjects.

Sam was fluent in French, held his own in German and could translate Latin—and Greek and Hebrew, from their own alphabets—at sight. Linguistics, philosophy, science, theology, history, fine arts, archaeology, literature, ice hockey and Buddhism—he was conversant with them all.

All religions, too, with a particular fondness for anything Jewish. He was a visiting scholar at Penn’s Center for Advanced Judaic Studies. He helped produce concerts of Holocaust composers in Philadelphia, in New York, and in Austria. At a Philadelphia meeting of Lubavitchers, Sam would show up, joking that he came to assure they had a minyan.

This voracious appetite for knowledge translated into a teaching style that not every student warmed to, because Sam’s range—and therefore, his lecturing—was as wide as the world, far transcending music. Fastidious note-takers quickly became frustrated, filling pages and wondering later what the class was about. But the best way to learn from Sam was to breathe in deeply, and grow.

I learned more about music turning pages for him than from anything else in life. The breath, the line, and the universe-opening potential of the smallest movement transformed me.

He was a poet at the piano, in the company of his beloved Debussy, Chopin, Mozart, and, above all, Beethoven. He embraced new works written for him by Lukas Foss, Ursula Mamlok, and Raoul Pleskow.

More than one student thanked God on his knees that Dr. Hsu played his meager little offering, making it sound better than it deserved. Sam wasn’t above enlivening chapel with blazing gospel hymn accompaniment, or heralding the start of a faculty meeting by sliding onto a piano bench and flourishing Roger Williams’s “Autumn Leaves.”

Elite he was, but never, ever elitist.

Sam was equally gifted in political discussion, articulating the best intentions, and greatest dangers, of every position. Never did he utter a negative word (even in private, gloves-off conversation) about anyone. He really believed that his purpose was to build others up. Christians often talk that way, but Sam actually lived it.

He had strong opinions, to be sure, but he couldn’t care less about winning an argument. He’d push his agenda just to goad you into revealing yours. Then the real work could begin, whether in a late-night bull session, a Collegium Musicum, or editing a book. When it was done, he directed all praise to everyone else.

Sam was the most “in” the world and least “of” the world of anyone I know. That quality rendered him exotic in evangelical Christian circles—this concert pianist, this Philadelphia Orchestra lecturer, this colleague of world-famous scholars. I suspect it also made him exotic everywhere else—this Bible-study leader, this Presbyterian elder, this Christian summer music camp teacher.

The best way to learn

As his teaching assistant, I was to instruct a class in chant. The best way to learn, Sam suggested, would be to copy it. So I drew four-line staff paper, got an Osmiroid music-nib fountain pen, and was soon producing the Gregorian neumes. It turned out that I was passably competent at copying music.

Later, the Fleisher Collection at the Free Library would hire me for a copying job, and 30 years after that, I retired as the collection’s curator. Sam created that sort of magic for a long line of students.

I finally asked him: Why Atanasiu? Well, he replied, he’d heard somebody mention a son Atanasiu, so when he was asked his name, Sam smiled and said, “Atanasiu.” They roared and knew it wasn’t true, but from then on, Atanasiu he was. It’s a common Greek name, but Sam knew that one of the great Christian creeds is named for St. Athanasius. My church recites the Athanasian Creed every year, on Holy Trinity Sunday. I think of Sam Hsu often, but always on Holy Trinity Sunday.