[First published in the Broad Street Review 10 April 2012, and reprinted here with permission.] 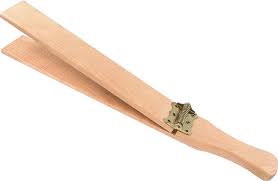 Not loud enough. The conductor looks my way, waves a cutoff, and says, “Yes, we could use more slapstick there.”

We’re rehearsing the Ravel orchestration of Mussorgsky’s Pictures at an Exhibition. It runs about a half-hour, and the slapstick plays once. I’m holding the slapstick.

Next to dropping a pencil, playing a slapstick is the easiest thing to do in an orchestra—so, the perfect job for me. I have little percussion skill to speak of, even after six whole months of drum lessons when I was 14, but I once sat in with the percussionists of the Orchestra Society for Pictures, 20 years ago.

Morris Goldman, a founder of that orchestra and its longtime manager, who passed away last month at 93, had called me. There weren’t enough real percussionists signed up for that night, he said, so if I’d help out, I could play whatever they were too busy to grab.

The Orchestra Society is a “reading orchestra” whose volunteer musicians—professionals, amateurs, teachers, students—meet at the Community College of Philadelphia every Friday to read through music. But for many years—and for this Pictures—they played on the stage of Drexel University’s cavernous Old Main Auditorium at 32nd and Chestnut.

An orchestra, like any other construction site, comprises various groups of specialists. Electricians, masons, and laborers each have their duties and relate to each other, at least en passant.

Percussionists, however, are the roofers of the orchestra. Nobody approaches them except under direct order.

They’re fine with that.

It isn’t that a roofer or snare drummer isn’t as personable as, say, a clarinetist. They’re the pleasantest of folks. They hold doors for goth teens at Wawa; I have seen this.

No, the reason you leave drummers and roofers be is because they chose a profession you would not, ever—and you know that they know that you know this fact. It takes a special personality to haul shingles on a slant next to a 60-foot drop, in heat, cold, wet, or wind. Roofers don’t wake up saying, “It’s a great day to be a roofer.” (Actually, I’m hoping they don’t.)

Percussionists, too, stare into the abyss and shrug. They show up first, set up more instruments than anyone else, and go home last. While violinists are still parking, percussionists are moving the glockenspiel a quarter-inch in every direction, optimizing distances to woodblock and tam-tam. The commonest elements sing in their hands.

To the drummers, a symphony is but a procession of Scyllas and Charybdises crouching to humiliate them. Any musician can come in wrong, but percussionists are exposed as none other. Yet up there they dance, three stories high, setting off clicks and hisses and timed explosions, a split-second from a plunge.

You are now lost, which the professional percussionist—who knows that the first rule of life is to Take Care of Business—never is. But no, you, crushed, lean over and whisper three words no percussionist ever will: “Where are we?”

Except for a few bass players, percussionists are the only orchestral musicians who stand while playing. There’s never a signal, but they rise together, one of the greatest sights in live music. It’s as banal as the tying of a blindfold, as predictable as the appearance of the words “experts” and “surprised” in an economic news report, yet it’s rooted in that collective unconscious that’s so well explained by Jung and limned by Hollywood: astronauts walking slow-motion toward you in a polished hallway, a swept-back duster exposing a holster, a flag snapped by a cold wind.

The slapstick is simple, as I said. Two boards, hinged at one end, are smacked together. Mine had a handle at the end, so I held it there to swing it down.

But it was difficult to calculate the contact, and it was never loud enough. So at the rehearsal break I tried again.

The principal percussionist, taking pity on me, walked over from the others and asked, “Mind if I show you?”

Ignore the handle, he said. Hold the bottom board in the palm of your left hand. The top, in the right. Slam them together. Oh, and keep your fingers out of the way.

While the musicians meander toward the soda machines, I practice slapstick. I find a sweet spot; yes, there’s a sweet spot on it. I adjust hand and foot positions. If I hold it at eye-level, I may see the conductor. Over and over, I work it.

Players wander back; I put the slapstick down. The chatting percussionists turn silent as they sit next to me.

The run-through begins. At number 14 of “Gnomus” the suspended cymbal lays down a soft-mallet carpet for 12 measures: a roll, mezzo forte, stopping suddenly on bar 12, beat 2. The slapstick follows, fortissimo, on beat 3.

Standing with the cymbal player, I pick up my instrument, settle it into my palms, studiedly nonchalant but inwardly coiling, counting, watching, 7-2-3-4, following the cymbal gathering itself, 10-2-3-, 11-2-, breathing, 12-, cymbal-ending, universe-zooming-to-me…

Springs release from below my feet, jolting electricity through my calves and hips and ribs and shoulders, flying into two hinged boards, and out, out as sound. Blasting past the conductor and into the deep, darkened hall, slamming into Old Main’s back wall. Ricocheting back, it rips white fissures in the air.

Silence, and the conductor, looking my way, continues the music, his eyebrows two arches. We percussionists sit, I breathe, and something catches the corner of my eye. It’s the grandest, most profound “Amen” a mortal may hope to receive.

The percussionists will have much more business to take care of before the night is over, but for now, they’re waving mallets and sticks silently in the air and looking at me. The principal, smiling, softly taps his knee, then looks back to his music.