My latest CD mini-review for WRTI, including podcast with musical excerpts. You can read all my CD reviews here. 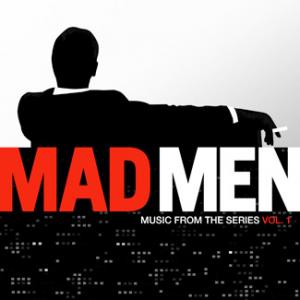 Matthew Weiner, the creator of the hugely popular TV series Mad Men—now in its fifth season—works very hard at going beneath the surface to capture the look of the 1960s, from company logo typefaces to office equipment tints to the shine in a pair of trousers. Mad Men composer David Carbonara labors just as much on the show’s music to express that era; he’s a composer of acutely original pieces.

Mad Men, Original Soundtrack from the TV Series, Vol. 1 is filled mostly with standards from artists such as Gordon Jenkins (“Caravan”), Vic Damone (“On the Street Where You Live”), and Ella Fitzgerald, who makes an appearance with “Manhattan.” “Fly Me to the Moon” is Julie London’s luscious pizzicato-tinged string version, not Frank Sinatra’s better-known big-band hit.

But for lovers of music in the cracks—not pop, not concert, but what, exactly—the reason to look for this CD may be David Carbonara himself.

Weiner chooses most of the period songs, but “Lipstick” by Carbonara is a distillation (if you will, given all the imbibing in the series) of music in the twilight: slightly lounge, slightly jazz, and as rebellious as one may appear while keeping one’s hair in place.   It’s the sound of muted trumpets, punchy trombones, low flutes, snapping fingers, walking bass lines, one-handed laconic piano playing (necessary while stubbing out a cigarette), and that child of the time, the Hammond organ. His “Mad Men Suite” is likewise all delicately drawn atmosphere.

A big surprise is the inclusion of the traditional round “Babylon,” known by many (anachronistically for the show) from Don McLean’s 1971 album American Pie. In one episode it was worked into a Village mandolin-strummed folk happening (with Carbonara briefly on camera, playing autoharp!). Its text comes right out of Psalm 137, “By the waters of Babylon, we laid down and wept, when we remembered Zion.”

What that has to do with the advertising world, legions of die-hard Mad Men fans will know. There’s a lot going on here beneath the surface.