Of Composers and Bridges

[First published 22 May 2012 in the Broad Street Review and used here by permission.] 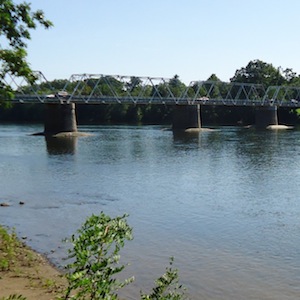 The bank of the river is dark—darker than it seems from a distance. I pick my way down to it, and it looks like sand, chocolate sand. Under my feet it slides softly down toward the water, arrested only by stubborn bushes and a type of ground-cover succulent I’ve never seen before.

The leaves look like smooth chard, but longer, like corn husks. No, thicker, darker, softer. I don’t recognize this at all.

Perhaps…yes, of course, it’s usually underwater. The bank, this far down, is actually riverbed, waiting for the next high-water. This sand is what silt is.

Did silt greet the sturdy longboats, scrunching ashore on a cold Christmas, carrying the 2,400 men who followed George Washington into Trenton? I wonder.

I drove across the just-wide-enough Washington’s Crossing Bridge, worrying about how far my side mirrors stuck out, then sniffed and supposed what the 2,400 might have worried about, faced with extreme cold, floating sheets of ice, and Hessians with guns.

There were no bridges across the Delaware then. The first one, now called the “Trenton Makes The World Takes” bridge, went up in 1806, 30 years too late for Washington. Still, if it had existed then, it would’ve been guarded. I wonder if the colonies were saved because there was no bridge.

There are 120 bridges over the Delaware now, both branches. One connects New Jersey and Delaware. The rest are spread among New Jersey, Pennsylvania, and New York, with one, larkingly, almost touching all three. Interstate 84 pushed west in 1971 from New York toward the top corner of New Jersey. At the last moment it veered ever so slightly west-northwest and entered Pennsylvania on a bridge that just misses the Garden State by the length of a Pontiac LeMans.

I wonder about bridges and history because I’m often asked to compose music for early instruments. My choral work Vespers uses Renaissance instruments; The Waking Sun and The Nobility of Women use Baroque. Some people have asked how do I do it, and why.

We composers rarely ask ourselves “why” questions, but fair enough. Most of us write for what comes along, and once Vespers launched without injuring anyone, other opportunities presented themselves to me.

That’s part of the why. As to the how, many composers play an instrument with some degree of proficiency, but no one plays everything. So most of the time we’re working hard to unwrap the technique of an instrument we don’t play.

If I have a proficiency, it’s in choral music—not because I have a trained voice (I don’t) but because I’ve sung in choirs all my life. I’ve learned what fits singers well and, well, what gives them fits. So whether I write for alto shawm, viola da gamba, or piano, it’s all the same to me.

We lock those sounds into our ears, and that’s more of the why part. Tom Purdom rightly enthused in BSR over the playing of Tempesta di Mare violinists Emlyn Ngai and Karina Fox. (Click here.) I composed for Tempesta in The Waking Sun, my setting of texts of Seneca. In fact, as soon as I knew I’d be writing for Tempesta in this collaboration with The Crossing, my first thought was that I had to have, somewhere, a violin duet. I put that into “Weary, with empty throat, stands Tantalus.”

Is there nothing more special than a violin duet? Violins are ubiquitous; aren’t Baroque violins essentially, well, violins? Well, yes and no.

The violin has many parts, all of which are changeable: angles and shapes and heights of fingerboard, tailpiece, bridge; the neck connection; the posts; the materials for these and other items—not the least of which, the strings themselves.

A Baroque “set-up” will completely alter the sound of a violin to a softer, yielding, more intimate voice. The Baroque bow—very unlike the modern bow, even to an untrained eye—demands a different playing technique, further sculpting attacks and phrasing.

Violin makers knew what they were doing back then, just as now. Modern instruments, generally, are not “better.” The modern violin is a clarion, built to project into a bigger hall, over more instruments. The earlier violin, built for different music, plays that music more efficiently.

A modern violin playing Baroque music sounds fine, but it must rein itself in, sometimes playing on the edges of notes, to coax the voicing, to approximate the conversation. The Baroque violin, however, can cut loose. And two of them playing counterpoint—oh my, the music naturally explodes into a succulence you’ve never tasted before.

That’s the sound I wanted.

It can be exciting to hear Vivaldi’s Four Seasons in a large hall, and it’s good to have large halls so that more people can hear Vivaldi. That’s just fine. But it’s just fine. You don’t see the riverbed for the bank, as it were. You never feel, under your feet, the difference between sand and silt.

Next time you’re in the northern Catskills, swing into Stamford, N.Y., and drive up River Street past the school until you see the creek on the right. Pull over, walk through the milkweed and place a foot on one side of the creek and one on the other. You’re now standing on both sides of the Delaware River’s west branch, about as far south as it’s possible to do that, at two miles below the source. The name of River Street, you see, is no poetic license.

But unless you’re there, or unless you want to swim or take a boat, look for a bridge to cross the Delaware. Composers build them all the time. Sometimes we’ll take you from New York to Pennsylvania and bring you within a car’s length of New Jersey. Or we’ll show you where the longboats landed. Then you may wonder at chocolate sand and plants you’ve never seen.