[First published in the Broad Street Review 26 Jun 2012, as “What I learned from whale watching.” Reprinted by permission.] 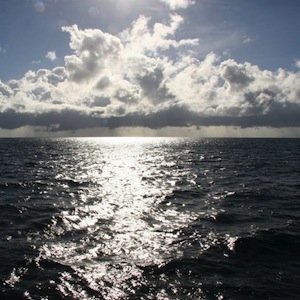 Looking for whales for the first time, the first thing you notice is that everything looks like a whale.

I grew up in South Jersey and went to the shore every year, so the sea, to me, was just a wave-producing machine. The purpose of that vast undifferentiated mass of water called the Atlantic Ocean was to make waves, mainly so that I could bodysurf.

It seems I have not outgrown that silliness, but have only replaced it with another. The ocean is now a whale-producing machine. I can appreciate how varied the ocean is, but still…every trough, swell, crest, cap, and splash interests me only because it betokens a whale.

Soon—and if I can claim any pride, it’s that I didn’t need the excursion’s entire three hours to figure this out—the non-appearance of whales allowed something else to materialize. But not at first.

The ocean out here looks pretty much like the ocean at the beach, just deeper. That sounds flippant, and I don’t mean it to be. I acknowledge the depth of it. Rises take their time forming and passing. There’s a restfulness that results only from a deep underpinning.

Waves do appear, but on this calm day they seem boring. They don’t crash. They’re not virtuosic or cadential. They’re by-the-way waves. They’re the ocean being the ocean.

Nevertheless, some things jump out. For instance, there’s a line where the Delaware Bay meets the Atlantic Ocean—a thing I never would have guessed. The small breakers and ridges from each body of water meet each other and, on a calm day, just pat their hands together. But the particular boundary between them is definitely observable.

The sea likewise extends and differs. These blues, greens, grays, and whites are easy to notice; yet I also notice that I’d never seen these before. Perhaps I’ll see them from now on, even from the shore.

The Phillies manager, Charlie Manuel, talks about the kind of hitter he likes. The popular theory is that to achieve success, you have to want it. But Manuel says that the hitter who wants a hit won’t be a great hitter. The hitter who loves to hit—now that’s who Charlie wants.

Baseball is mostly failure; even the best hitters fail seven times out of ten. A good hitter loves success, of course, but wanting—and failing—grinds you down. Loving, not wanting, is the key to excellence.

Excellence, you see, is not success, at least as the world counts success.

The art of watching

As a rookie on the boat, watching the water for whales, I finally noticed something else. Other people on the boat were watching, too—the mates, who were masters at watching. So I watched them watching.

There seemed nothing special about them at first; they stood, they watched. (They also, mostly, didn’t hold onto anything, but one education at a time.) Then I noticed a look in their eyes, something I recognized.

I’ve seen it before. Farmers have this look, surveying a field, or taking in a cloud crossing a hill. From opposing bullpens, managers can have this same look, when a hitter is working deep into a count, patiently turning nasty sliders into foul balls. Conductors may have it—listening, wondering after something that’s there, something that may be, and something that isn’t, yet.

Maybe I’ve had it, too. As a composer, I’ve felt it, anyway, when I’m massaging a handful of notes into a phrase—working them, deleting, grabbing and working them again, trying to sculpt them into something I want, something I think I hear, then letting them become, I hope, what they already are.

The eyes look nonchalant at first, but that’s too small of a picture. The key characteristic is detachment, perhaps, or dispassion, or even disinterest: how the ever-elegant King James Version describes God’s level view of us: that He is no respecter of persons. But that’s too big of a picture, surely.

I never did see a whale that day, but I saw that fixity. And, I did see the ocean.