My latest CD review for WRTI… 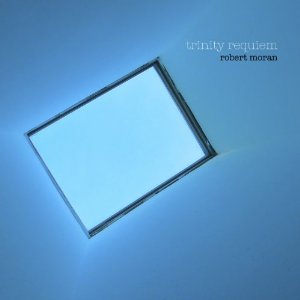 Robert Moran has written music for entire cities to perform—San Francisco, Graz, Bethlehem, Pa.—with cars, airplanes, multiple orchestras, choirs, and bands joining in raucous mélanges of celebration. You wonder what he would write for a city’s terror.

Trinity Wall Street commissioned Moran’s Trinity Requiem for the tenth anniversary of the 9/11 destruction of New York’s World Trade Center. Trinity is the Ground Zero church. Its St. Paul’s Chapel was covered with the debris of the 2001 terror strike, a lone sycamore tree’s upshot roots miraculously shielding it from damage. It held rescuers and mourners, and for months its sturdy iron fence supported an ever-growing drapery of photos of the thousands lost that day.

The Trinity Requiem is for youth choir, four cellos, harp, and organ. The youth choir became the compelling reason for Moran to take on the project. He thought of all the children in all the wars who lost their parents, who lost everything, and told Robert Ridgell, then the director of the Trinity Youth Choir, “Rob, this is what ‘our’ Requiem is about, these thousands and thousands of kids left with nothing.” Then he composed this haunting music.

It moves mostly at a calm and peaceful pace, not unlike Fauré’s Requiem. That may seem at odds with Moran’s post-minimalist tapestry, but he shares with the French master this quality: lyricism without shame. Moran makes you forget labels. All that’s left is to embrace the music.

Also on the CD is an intriguing collage of elements from Trinity Requiem remixed by composer Philip Blackburn, called Requiem for a Requiem. Moran has two more choral works here, Seven Sounds Unseen, introspective settings of passages from letters John Cage wrote to Moran, and Notturno in Weiss, a setting of a poem by Christian Morgenstern (1871–1914).

…The family of stone,
Fashioned from marble,
Kneels unto a lily,
In the deathly still of night….

Unearthly, questioning, and grounded at the same time, it reflects—as does Moran’s Trinity Requiem, as does all of Moran’s music I’ve heard—on the hope of humanness.