The Treasury of English Church Music

My latest CD mini-review for WRTI, podcast with musical examples below. You can read all my CD reviews here. 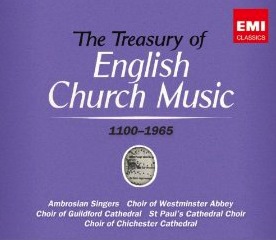 The subtitle of this five-CD set is “1100-1965,” and this is, in fact, a new release of the 1966 recordings, with 30 bonus tracks added. The original LPs accompanied the publication of a new edition of the printed music, and the project brought together the finest English sacred choral repertoire, from the conquest of the Normans to the conquest of Howells.

Herbert Howells (1892-1983) himself opens the album with an address about the importance of the Treasury project, with some humble remarks about his own contribution. If you know English church music, you know Howells. If you don’t, this is a chance to hear the lion of the last generation, and to contemplate how much modern choral composers owe him in the apposition of thoughtfulness and passion.

The Treasury of English Church Music is nothing less than a history of Western music itself, but from the vantage of this sceptered isle. Unison chant begins it, and soon, second and third voices join in parallel motion, the gently sweet fauxbourdon and open cadences that herald the first stirrings of modern counterpoint.

Dunstable, Tallis, Morley, and Byrd are giants, but appearing next to lesser-known names such as John Merbecke and Walter Frye, they solidify their own standing while they magnify the others to a well-deserved hearing. Merbecke’s Nunc dimittis (“Lord, lettest now thy servant depart in peace”) breathes a tune that church musicians still use.

Everywhere you turn, major and so-called minor composers complement each other: Gibbons and Weelkes with Richard Farrant and Robert White (with excruciatingly subtle harmonic pressure-points); Purcell with Pelham Humphrey and Maurice Green; and into the 1700s, William Boyce with the very classical James Nares.

The 19th and 20th centuries give us, among many others, T. Tertius Noble, Charles Villiers Stanford and his pupil Ralph Vaughan Williams, Martin Shaw (his Creed, not With a Voice of Singing, which every chorister of a certain age knows almost by heart), Britten, Walton, Howells, Peter Maxwell Davies, and Elgar.

Throughout, the men and boys choir tradition is upheld to great effect. The aspects of this style of music (if you allow eight centuries to be called one style) are apparent: creamy lines cunningly wrought and harmonies that reveal themselves slowly, as a landscape unwraps itself while you walk around a bend in a country path. Listening to all this together, however, you may begin to realize something else, negatively stated. In five CDs, there is not one moment of bombast.

Perhaps, for this royal throne of kings and this happy breed of men, there is no need for it. That may very well be stretching Shakespeare out of proportion (and the English love proportion), but if so, the intention is well meant. This Treasury of English Church Music is, indeed, a precious stone set in the silver sea.