[Reprinted with permission from the Broad Street Review under “Advice for aspiring composers: Stop all that strolling, and just stand still”] 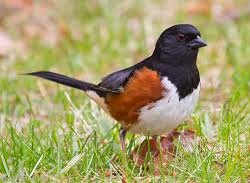 It looked like a black sparrow, except that it was slightly larger than a sparrow, and also there’s no such thing as a black sparrow. This bird was on the ground in front of the dormant forsythia, scratching in fallen leaves the way a junco does, both feet hopping together forward and backward, quick, a hot-stove touch, uncovering bugs and seeds.

Juncos are gray, though, and white underneath. The binoculars reveal, yes, a white belly, too, and a beak more like a finch’s and, oh, bright red on the sides—how did I miss that?

I have no idea what it is, but this is a brilliant bird. It was happy to stay there, too, giving me time to get out my bird book if I wanted to. But I didn’t want to. The thing now was to stand still with it and watch.

Many people think that composers do their composing on long walks. I know they think this because they ask me if that’s what I do. It’s understandable; Beethoven is said to have strolled through Vienna with his hands clasped behind his back, singing loudly to overcome his deafness, scaring children. Brahms, too, strolled through Vienna to the tavern with his hands behind his back, scaring other composers, probably. Mahler, they say, did the same stroll in Vienna, to orchestra rehearsal, rubbing hands together, scaring brass players. Or Mozart…Vienna…hands swinging free…creditors.

Vienna has good P.R. But that’s not how composing works.

I do enjoy strolls, and composers do seem to share that trait, from what I’ve read. But walking mainly benefits the artist’s psyche, not any mechanics of generating art. That is, a composer is as calmed or as exhilarated as anyone else by walking, and is just as filled with an appreciation of nature’s beauty. A composer may even think of tunes or work out musical ideas to some extent while hiking around.

But to get any real work done, you’ve got to attach your posterior to a chair and have music paper in front of you.

I just finished working on a piano piece that will be recorded soon, a short setting of a hymn tune, Softly and Tenderly. I actually wrote it a long time ago, but over the years I knew that it needed another look. Something about it made me uneasy. Overall, I remembered liking it OK…but no, it needed work.

The recording project gave me the excuse to take it out again. I looked at it and was frankly horrified by the doltisms. Everywhere I looked, more clunkers.

This would take some doing to fix. Since it was in my memory, I would think of it while driving by myself, or walking, or dozing off at night.

No remedies appeared, however. I finished a deadline for another work and then finally did what (I now realize) I had been delaying so long: I sat at the computer, opened up a fresh page of piano staves, and started entering notes.

I began by simply re-copying the old version (so old, in fact, that it was in blessed manuscript). Hmm, some nice things.

Then I ripped it into pieces. There were so many items needing improvement: muddy voicings, awkward lines, an intro that couldn’t make up its mind, dead spots, an unsatisfying ending. I plunged in, rebuilding there, tweaking here, slashing, tightening.

Too simple, too obvious

The biggest problem, though, was the “come home” motif, two notes high, then repeated low as the lead-in to the melody. Because I didn’t want them to stagnate, I had changed the notes as the tune progressed. Leaving them as just two notes seemed too simple, too obvious. They had to go somewhere. Didn’t they?

That was the problem. They didn’t need to do anything, it finally occurred to me. They just needed to call me home.

So I trashed the changed notes and just repeated what was there. Come home, come home, come home—that’s what it needed. It was right in front of me, and as soon as I stopped trying to be sophisticated, the piece started to live.

All I had to do was sit down and look, sit and listen, to stop strolling, to stop moving. As soon as I stood still, with the music in front of me, it became clear.

P.G. Wodehouse describes this situation exactly, with Bertie Wooster trying to induce his two friends to fall in love.

“What do you call it when two people of opposite sexes are bunged together in close association in a secluded spot, meeting each other every day and seeing a lot of each other?”

“Is ‘propinquity’ the word you wish, sir?”

“It is. I stake everything on propinquity, Jeeves. Propinquity, in my opinion, is what will do the trick.”

Bertie knew the trick for Gussie Fink-Nottle and Madeline. It’s the same for composers. Separate us from music paper, and the music disappears.

Walks are all very well, but what’s needed is to come home and stay still. The music paper—or the computer screen—with staff-lines waiting to be noted, that’s where the music happens. I stake everything on propinquity.

I looked it up finally, by the way. It was a towhee, an Eastern towhee that I saw while standing still. It’s a beautiful bird. I do hope that you may see one.