[Originally published at wrti.org] [podcast of this article, with audio samples] 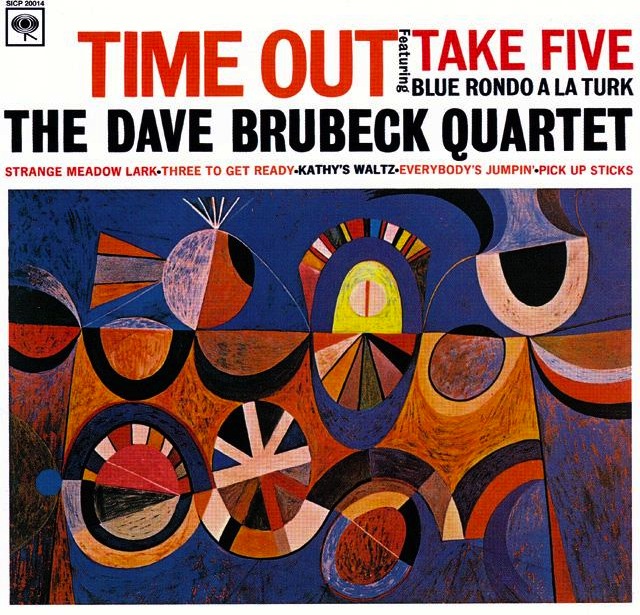 In Jailhouse Rock, Elvis plays an ex-con rube hoping to make it in the music business. He’s dragged to a swanky party, where he’s wedged between society snobs who try to look intellectual and hip by discussing modern music. They toss around lingo like “dissonance” and “atonality,” and the names of some musicians, including that of Dave Brubeck. Elvis’s increasing discomfort wells up when the hostess asks his opinion. Rather than revealing his ignorance, he barks crudely at her and stalks out.

Hollywood knows a good stereotype when it sees one, hick or slick, and “Brubeck” meant cerebral, cool, West Coast. The Dave Brubeck Quartet was already one of the hottest ensembles in jazz in the ’50s, playing hundreds of concerts, and releasing multiple LPs, every year. Brubeck’s face had been on the cover of Time magazine in 1954, Jailhouse Rock came out in 1957, and it would still be two years before the Quartet had its incandescent burst into the stratosphere—and into jazz history—with the release of Time Out.

Led by the hit single “Take Five,” written by alto saxophonist Paul Desmond, Time Out was the first jazz album to sell a million copies. It broke many conventions in achieving that. For one thing, it was a jazz album with nothing but original pieces. No comforting “standards” were on it to reassure buyers wary of new music.

For another, the cover art was a contemporary, abstract painting. People like to look at faces, especially of celebrities, but there were no photos of the popular musicians greeting the public, just egg shapes and abutting slaps of color.

But the biggest risk, of course, was the music. “Take Five” added one little beat to the normal 4/4 pulse and made it 5/4, an unheard-of time signature for jazz. It’s found in avant-garde music or in folk traditions tucked away in Hungary, India… or in Turkey, where Dave discovered it. On tour, he heard local musicians playing odd rhythms and decided right there that he’d make a jazz album employing unusual time signatures. “Blue Rondo à la Turk” in a crazily sliced 9/8 was born there, and so was Brubeck’s lasting popularity.

These are beats you can’t dance to and can’t sing to, or so we’d think. The album was a gauntlet slammed into the ground of jazz. With Time Out, it’s as if Dave Brubeck were announcing, “Ladies and gentlemen, there is only one rule in jazz. It’s got to swing. And we can swing in 4, 3, 5, 7, 9, or anything. Here we go.” And off they went. “Take Five” was not only the Quartet’s biggest hit, it is still the biggest jazz single in history.

Desmond’s tune, and his sound, epitomize the ice-smooth and pungent spice of his talent. He likened his own playing to a dry martini, and there’s never been a better description. His supple, mid-air twists still amaze, but he’s a giant because of the non-headlining gifts he prized above all others. In a letter to his father he listed them: “beauty, simplicity, originality, discrimination, and sincerity.”

He was Charlie Parker’s favorite alto player. Desmond admired Parker and other bop musicians, but knew he could never be one. He joked, “I have won several prizes as the world’s slowest alto player, as well as a special award in 1961 for quietness.”

Joe Morello is the kind of drummer whose talent knocks you down in stages. He’s not the freight train that Art Blakey was, nor a Buddy Rich Formula One race car. Philly Joe Jones played like he was falling down a flight of stairs and then strolled away smiling, but Joe Morello was Picasso, painting himself into cubist corners and turning the trap set into a mirage. Or like M.C. Escher, with finely detailed, perfectly executed stick-work leading you down a stairwell and out onto a roof.

But he could shout, too. His solo on the “Take Five” single sneaks in, stutter-stepping, but before long he’s slamming doors, or the same door, over and over, until he’s satisfied that it’ll say shut. Then he skips away on the ride cymbal.

With time-bending sax and shape-shifting drums, the bass player had better be strong, and Eugene Wright is that rock. His playing has been described as “Kansas City,” which, to my ears, in the context of the Dave Brubeck Quartet, means solid and fluid at the same time. It’s steady but always singing and tuneful. Wright is more than just the reliable springboard for the others, but a master technician of blues and feel. The little laugh at the end of “Unsquare Dance,” a blues Rubik’s Cube from the Time Further Out album, is Wright’s relief that their layered syncopations over 7/4 actually worked!

“Take Five” may be the most thankless of songs for a bassist, since he’s little more than a metronome on this chart, recycling the same notes over and over. But listen closely. He’s not just keeping the beat, he’s handing it on. Even in “Take Five” you’ll hear Eugene Wright’s unbearable lightness of time.

Dave Brubeck may be the most unlikely of jazz pianists. He almost was tossed from college in his senior year, he related, because they discovered that he hadn’t learned to read music. A few players, early in jazz history, didn’t read notes, working music out by ear. But Brubeck’s sense of harmony is so intricate that we’re surprised by the story. They were surprised then, because in four years of college nobody had caught it.

His style of playing also sets him apart, and some wished that he’d cut loose during solos like other pianists. But he wasn’t like other pianists, and his music isn’t like other music. His block chords and rolling ruminations lend themselves to the sometimes-punishing chromaticism of the tunes. (Take a look at the sheet music to “The Duke” sometime to feel your head lean to one side.)

He was always trying something new, looking for sonic breakthroughs that would illuminate the bones and sinews of a piece. That was his swing, and his jazz, and it works.

The secret of Brubeck’s music, though, and of his success, has nothing to do with style. His impact on jazz isn’t because he’s cool or West Coast. It’s not that Brubeck didn’t play standards (he did). It’s not even rhythm or time signatures or the supposed braininess Hollywood made him the poster boy for. If you want intellect, after all, bop’s your game.

No, Dave Brubeck’s secret is that his music is beautiful—unerringly, dreamily, laughingly beautiful. Paul Desmond’s playing, Joe Morello’s, Eugene Wright’s: all beautiful. He wrote new standards. Jazz or no jazz, he wrote songs, and each solo within the song was also a song. Dave Brubeck made music like no one else. That is his secret, and that is his legacy.

[Here is my interview with WRTI’s Bob Perkins on Brubeck.]