[Remembering the anniversary of her death 20 Jan 2012; first published 31 Dec 2011 in the Broad Street Review and reprinted with permission.] 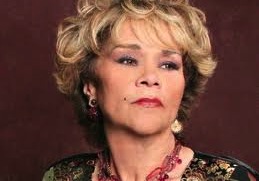 A spotlight pushes like a wave across the room, lifting up glints from highball glasses and lacquered fingernails and cuff links, along with the bluish pinwheel galaxies of Old Gold and Chesterfield smoke. It washes onto the stage, where a gleaming woman stands at a microphone, waiting.

Strings, close by, introduce a song. Their sinuous lines curl and dip, swooping and almost stopping as they crest, before lazily plashing at the woman’s feet.

She is young but sings old. Although she’s only 22 she has been waiting a long time for this song. Her improbably blond hair belies the hurt she’s known. She’s lived trouble to spare, has loved, but not happily, has eaten pain. But as the introduction ends, her eyes begin a slow, wise smile, and she sings,

With these two words, with this pent-up exhalation, Etta James discovers herself and launches an anthem. “At Last” had been covered by a handful of artists, but the song became immortal in 1961 because of her; and because of her, it’s the icon of a poignant era in American music. (To view a more recent performance, click here.)

Great things are sui generis, hard to define because they break models. Bach, the ultimate Baroque composer, is the least Baroque of them all. Robert Duvall, neither leading man nor character actor, reinvented the screen.

“At Last” is blues, to be sure; but with its bits of rhythm-and-blues, jazz, swing, doo-wop, and even country, it ought to have been nothing more than pop smush, a ’50s leftover. Harry Warren and Mack Gordon wrote it in 1941 for Glenn Miller, the year Miller recorded “Chattanooga Choo Choo.” Miller’s “At Last” is a slick, smiling, denatured big-band bonbon—in fact, exactly the kind of vanilla that triggered the be-bop and rock backlash.

Music of the ’50s has a peculiar affect partly because it’s an interregnum. The Great American Songbook had closed, for all intents and purposes, by 1953 or so, with Indian summer blooms like “My One and Only Love.” Hits such as “I Only Have Eyes for You,” “Blue Moon,” and “Smoke Gets in Your Eyes” were remakes of ’30s show tunes. The ‘50s even brought forth three versions of “Stranger in Paradise”—melody by a Russian opera composer who was dead before Irving Berlin was even born.

It would all be tsunamied by “Rock Around the Clock” and its kin, which packed energy but little else.

Last gasp before The Beatles

Black singers sang white, white sang black. Everyone was trying to figure out who they were, all in the name of opening new markets. The music business was on the cusp of becoming an industry. The British Invasion was about to power-wash the American asphalt, and folkies and ex-jazzers would fan out into a new American pop landscape.

Etta James’s “At Last” might have been the last gasp of a disappearing remnant who wanted hits to be classic songs. But they didn’t overreach here. “At Last” is a haymaker, so much better than the original. It’s not a deconstruction, a re-imagining, or a referencing of the old song. James and the producers grabbed it and dragged it across 20 years and made that song the way it should have been made in the first place.

The notes for those first words, “At last,” are a cadence, an ending. Five-one, or sol-do, is the melodic progression, which usually comes at the end of songs, the end of concerto solos. You hear it and you know everything’s been said that’s going to be said. And, in a way, the words “At last” do wrap it up. The rest of the song—my love has come along, lonely days are over, skies are blue, I found a dream, a thrill, you are mine—is commentary.

Those strings are typical sweetening, but notice how few there are. Such small forces, yet so many chromatic notes: They sound as if they’re about to capsize. It’s slightly unnerving as you hear separate players (and, sometimes, separate intonations). Yet a full string orchestra would sound puffy.

If one sound defined the ’50s, it would have to be those teardrop pearls of triplets dropping out of the middle-high piano register. Whether the arrangers were aping the faster rockabilly and R & B or were simply too impatient to allow a ballad to unfold on its own, they put those triplets there to span the gaps between beats.

The drummer usually handles it, but at some point a pianist threw a couple of fingers down and helped out softly. They’re fillers, a delicious weakness of the time. You hear the distantly miked piano, and lose it, and hear it again, giving these recordings an extra frisson of liveness, a wise innocence that slowly eroded and would be gone in a few years.

All this is contained in “At Last.” But the song is immortal because of Etta James.

Remarkably, she does hardly anything with it, singing it almost straight. Her instrument—her voice—she just lets go. It’s girlish at times, large and fanfaring at others, but always emotionally true. It sounds natural and confident, as if she could sing for hours and never tire.

She’s just talking to us, it seems, having no time for those inflections, the warbles and hammered squibs of preening TV idols, of national-anthem renditions longer than Telemann cantatas. A little scoop here, a blues bend there, and that’s it. She sings “over” the way you say “over.” She sells the song, not herself—a breathtakingly elusive concept.

I’ve never seen Etta James sing, but when I hear that song, I see that spotlight, the smoke, the glint of cuff links, and a 22-year-old woman with a slow, wise smile who knows what pain is, and now, what clover is. Etta James always sang old, but she’ll always be young.