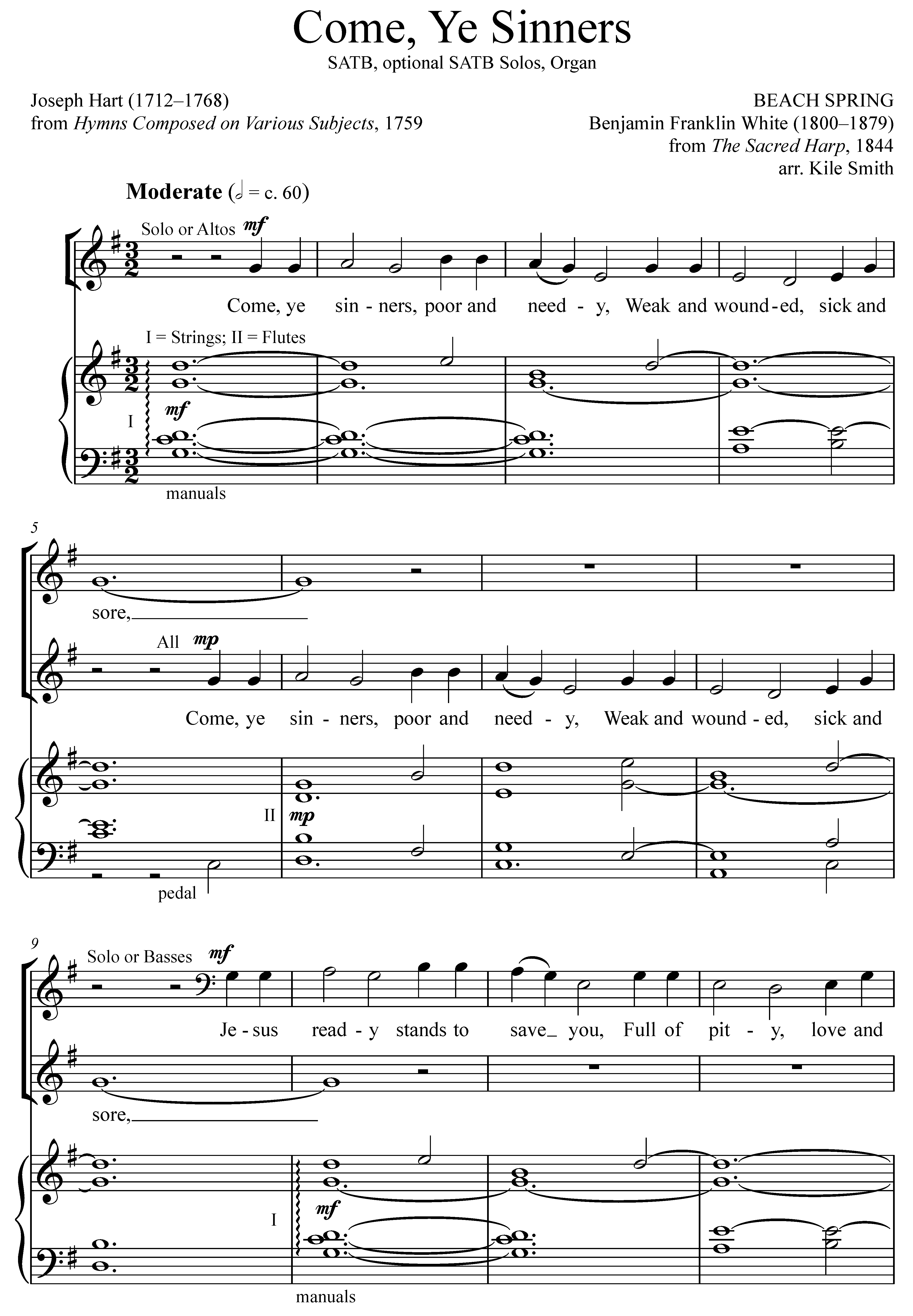 Written and published years ago, Come, Ye Sinners harks back to the music I’ve always harked back to, early American hymnody. The text is by the 18th-century Englishman Joseph Hart, the tune by the 19th-century American Benjamin Franklin White, one of the engines behind that monument of American musical independence, The Sacred Harp.

Joseph Hart was a Christian who kept losing his way in life, and who made the mistake of attacking John Wesley. Not that Wesley even noticed Hart’s tract The Unreasonableness of Religion, but Hart was convinced that the Holy Spirit did, because Hart later underwent a complete conversion, on Pentecost Sunday, 1757. Two years later he published Hymns Composed on Various Subjects, which included “Come, Ye Sinners.” He had also apologized to Wesley.

Along with this hymn he left us this quote: “Pharasaic zeel and Antinomian security are the two engines of Satan, with which he grinds the church in all ages, as betwixt the upper and the nether millstone. The space between them is much narrower and harder to find than most men imagine. It is a path which the vulture’s eye hath not seen; and none can show it us but the Holy Ghost.”

B.F. White’s tune for this is called Beach Spring (sometimes spelled Beech Spring). In this anthem I have adopted the ancient, and as it turns out, anachronistic technique of “lining out,” so old I don’t believe it would’ve been used at all by White’s time. In colonial days, before songbooks were available, a pastor or deacon would stand in front of the congregation, sing the first line of a hymn, then direct the people in its repetition. They would proceed through the hymn this way, line by line.

That’s the first verse. The second is completely imitative; each voice sings the exact same melody, canonically, over the words “Let not conscience make you linger, Nor of fitness fondly dream. All the fitness He requireth Is to feel your need of Him.” The organ then breaks forth, as do the voices into four parts, for the second half of that verse, “This He gives you, this He gives you, ‘Tis the Spirit’s rising beam.” The first verse is then repeated simply, to close the anthem.

I mentioned that this had been published and it was, meaning not self-published. Fortress Press picked it up in 1985. It eventually went permanently out of print (publishers call that—and composers do too, ruefully—going POP), and then Fortress itself went, in a way, to its reward, subsumed into Augsburg Fortress. The copyright has reverted to me and so I’ve brought it out under my publishing arm, Tau Imprints. It is the most used of my anthems, owing, I believe, to the magnificently pure tune which I succeeded not to get in the way of. It received a good notice from the Journal of Church Music: “Compelling… attractive… straightforward, driving rhythm.”