[First published 3 Mar 2012 in the Broad Street Review and reprinted with permission.] 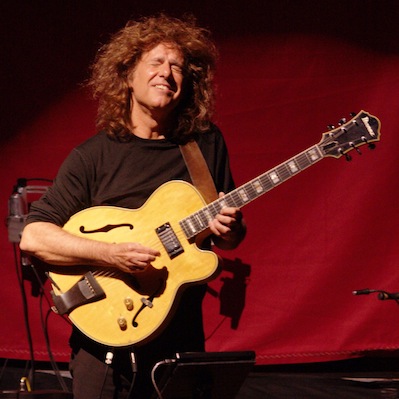 We were a Pat Metheny crowd at the Keswick, middle-and-more-aged fans of alert guitar music played well. We followed every nuanced feint, swoop and sprint in Metheny’s ambient-tinged jazz charts, applauding, cheering, even yelling our approval.

But something odd happened halfway through the finale: We roared. Yes, it was a roar. Metheny and bassist Larry Grenadier were locked in, and while we had loved them before and had smiled at their artistry, now we were ecstatic, and locked in, too.

Backbeat happened, that’s what. Locked into a rock groove, for a moment we—the Pat Metheny crowd—became a rock crowd.

Rock ‘n roll contains only a few elements, but backbeat is indispensable. Gospel may have used it first, in the 1930s; and you hear it in some big band, jazz and blues. But rock depends on it.

Take away any other element—guitar, drum set, blues chords—and you can make do. But there’s no rock if there’s no backbeat.

In “Rock and Roll Music,” Chuck Berry said so himself: “Just let me hear some of that rock and roll music/ Any old way you choose it./ It’s got a backbeat, you can’t lose it.”

In all music, the first beat of a bar is naturally accented. It’s the downbeat; it’s where you scrunch the ball of your foot into the batter’s box. The distance and frequency of repeating strong beats defines the meter, so waltzes are in three, allemandes and Chuck Berry are in four.

Four-beat dance music usually accents every other beat, so: beats 1 and 3. Rock however, turns that around, and stresses 2 and 4. Backbeat.

The universal rock stadium anthem, Queen’s “We Will Rock You,” is nothing but backbeat. Stomp-stomp, CLAP, stomp-stomp, CLAP. It’s genius, even without music.

Without backbeat, pop music is simply pop, neatly explaining Neil Diamond, say, as a crossover artist. The verse of Diamond’s “Sweet Caroline“ is straight pop. “Where it began…,” Bom, bom, bom, bom: Every beat is the same, with a little goose on the downbeat. But turn the corner into the hook, “Sweet Caroline,” and—bom, Clap, bom, Clap—you’ve crossed over into rock.

One of the surprising felicities of funk is the defibrillator it slams into beats 1 and 3. Whap!… “I feel good,” whap! James Brown turns the tables on rock by creating a backbeat against the backbeat, as it were, unveiling (as if new) the downbeat. His band had to get used to it, because it’s anti-rock.

Do I hear a waltz?

Rare is the modern pop hit that’s not in four, but there have been some. James Taylor’s “Sweet Baby James“ is one, and so is Debby Boone’s “You Light Up My Life.” Include two Philadelphia hits here: “If You Don’t Know Me By Now,” the Gamble and Huff 1972 chart-topper for Harold Melvin & the Blue Notes; and “Break Up to Make Up“ (1973), by the Stylistics (with Gamble as co-writer). All are waltzes.

The Beatles, edgier than most people realized, take a swing outside of four here and there. “Martha, My Dear“ (1968) slyly folds in an extra beat or two, and “Here Comes the Sun“ and “Strawberry Fields Forever“ cross us up with lacunae and mixed meters.

(My cousin’s ex-husband, the rock frontman, once insisted to me that such writing was “cheating.”)

Why rock saddens me

But to make a hit, everyone usually comes home—even the progressives and the jazz-fusion bands—to a 4/4 backbeat hook. Consider, for example, Weather Report’s only smash, “Birdland.” Bands all along the watchtower, wondering if Babylon is fallen, is fallen, have, only if they dared, stepped outside the fortress of 2 and 4.

At the Keswick, Pat Metheny, who has made a career in that very no-man’s land, bounded back into those battlements, coyly turning into a rock musician. And we, for a moment, turned into a rock crowd.

But then I remembered that, eventually, rock always saddens me.

I think I know why. The inescapable beauty of the downbeat is that, regardless of meter, it’s the pivot. From that one point, any direction is open, any option is possible. Any rhythm, any beat can open up at any moment. You stand in the batter’s box, swaying back and forth, and at the moment of choice, you shift your weight to the ball of your foot. Your entire body and all your energy balances on that one point…and lets fly. You can hit any pitch to any part of the field.

Backbeat nails your other foot to the ground. It lures you into a belief in two pivots, whispering in your ear that two worlds of possibilities, after all, must be better than one.

But there is only one world. And as that world rushes by, your two feet stiffen and you sink into the box. You can’t swing.

Metheny knows it, and so he jumps out of the backbeat as quickly as he jumps in.

Rock, for all its euphoria, lacks flight. It stomps, but it can’t pivot. For all its bad-boy jaggering, it’s innocent of great melody.

What it has is a hook. If it’s a good hook, yes, we love being caught. But we wriggle and go nowhere.

Come to think of it, rock songs rarely even end. They just fade out on the repeat.

And so the band locks in and the ecstatic crowd locks in, but the wide-open world gazes in at you, in the tower, caught on a hook. And then I remember: I wasn’t meant to be locked in.