Francis Pott in the Heart of Things

My latest CD review for WRTI, podcast with musical examples below. You can read all my CD reviews here. 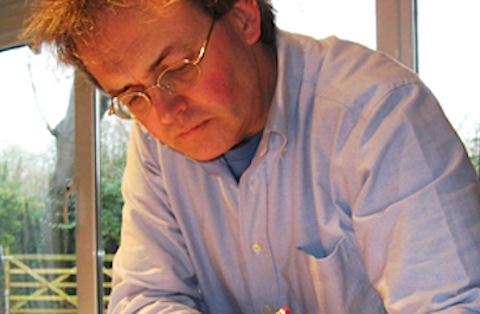 Whether communication is too easy, or articulation is too difficult, our time is not a time of counterpoint. Instead of corresponding, we post or tweet; instead of reasoning, we shout and repeat, louder and louder. Music is often an event or a stepping-up of rungs of events: hooks and ladders, clanging past, looking for a fire.

The choral music of Francis Pott, however, flows by, refreshingly contrapuntal. That joy in the working of voices is particularly evident in his 2012 CD, In the Heart of Things. If counterpoint seems anti-modern, he admits it, and points to Thomas Tallis, William Byrd, and other past masters of the polyphonic Mass as models. That’s appropriate, because In the Heart of Things is a collection of his choral music revolving around the most substantial work on the recording, his Mass for Eight Parts.

From the Kyrie through the Agnus Dei, this Mass is a triumph of intricate beauty. Upper, middle, and lower streams of voices glide by and mingle, their complexity unnoticed because they shimmer. Sometimes they sneak in, as the “Hosanna” does at first in the Sanctus, or roll in waves, gathering strength as at the end of that movement.

Sometimes the power is overwhelming, as at the end of the Gloria, the final “Amen” surging, unexpected, rank upon rank. Pott composed the Agnus Dei in memory of someone he didn’t know, a past singer of Commotio, the choir that commissioned this. His gentle, pointed lyricism melts the voices into a sea of comfort.

Francis Pott was raised in the English chorister tradition, and knows this repertoire from the inside. His setting of a familiar text, such as Balulalow (known by many from Benjamin Britten’s A Ceremony of Carols), or the new Mary’s Carol (Pott wrote this in memory of his father-in-law), always balances freshness of expression with aptness to the language.

His Lament honors a soldier killed in Afghanistan. Using the poem of Wilfrid Wilson Gibson, “But we, how shall we turn to little things / And listen to the birds… nor feel the heart-break in the heart of things,” we know the composer feels deeply what we also feel. This fellow-feeling is at the heart of artistry.

Francis Pott weaves a living counterpoint of music and emotion because he himself has sung it. His music breathes the life of tradition, but it is ever fresh, ever modern.