The Red Book of Montserrat 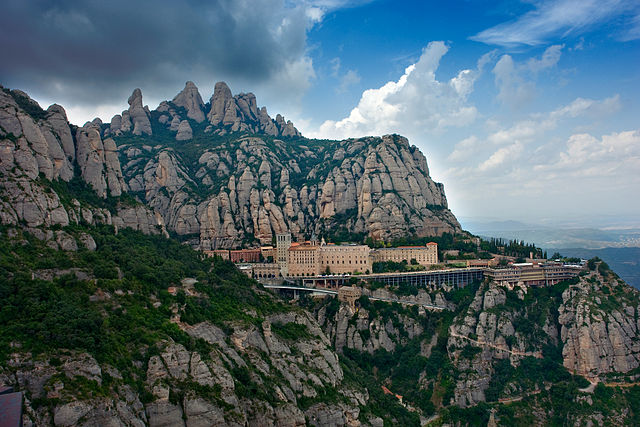 The Red Book of Montserrat is a suite for string orchestra commissioned by the Philadelphia Sinfonia, the excellent youth orchestra Gary White directs. It sets five of the ten songs from the Llibre Vermell de Montserrat, the 14th-century book of music and texts from the monastery in Spain. Montserrat is a holy site of pilgrimage, a shrine to the Virgin Mary; the songs praise her and appeal to her for guidance. The tunes are well-known to early-music aficionados and played often in various guises by many ensembles. I wanted to see how they might dance in a string orchestra.

One of the challenges in composing this was to maintain interest in a strings-only setting of repeated verses meant for singing. I employed a variety of string techniques to do this, by no means avant-garde: some harmonics, divisi, pizzicato, solo writing. But they were enough, I thought, to keep the players on their toes while playing archaic rhythms in a modal harmonic language.

My hopes were that they would enjoy learning a new, energetic work, and that I would have used the traditional string ensemble to full advantage.

The piece is about 20 minutes long. The Philadelphia Sinfonia premiered 16 May 2013 at the Perelman Theatre, Kimmel Center, Philadelphia. A sneak preview of movements 2 and 3 was performed 17 Feb 2013 at St. Stephen’s Church, 10th Street below Market in Philadelphia.

These are the movements and descriptions, with the original Llibre Vermell order of songs and titles, the full score, and recorded excerpts from the premiere:

1. Empress of the Joyous City of Paradise

#1, O Virgo splendens. “O resplendent Virgin, here on the high mountain, glowing with miraculous wonders, where the believers from everywhere ascend. Ah, with your gentle loving eye behold those caught in the bonds of sin, to let them not suffer the blows of Hell, but let them be with the blessed by your intercession.” A chant-like, rolling melody. The three-part canon is indicated in the original manuscript; I underlaid it with simple, musing bass lines.

3. Splendid Star on the Mountain

#2, Stella splendens. The repeating verses are interspersed with a chorus of the same music, heightening the need for unflagging interest in the orchestration. Solos with varying degrees of embellishment are used throughout.

4. Our Queen above All Heavens

#6, Polorum Regina. Meditative and static with simple imitation of a glowing melody, this splits some string sections into three parts over a ruminating bass.

5. We Hasten to Death

#10, Ad mortem festinamus. A sermon in the decidedly non-morbid, rollicking, Totentanz tradition: “We hasten to death, let us desist from sin. I have resolved to write about the contempt of the world, so that this degenerate age will not pass in vain. Now is the hour to rise from the evil sleep of death. Life is short, and shortly it will end; death arrives faster than anyone believes.” Everyone from king to priest to rich to pauper joins hands with Death. And dances.