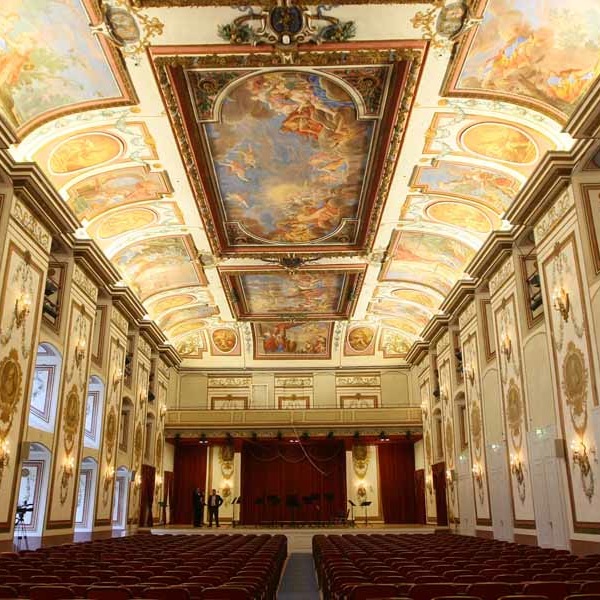 We call Joseph Haydn the “Father of the Symphony,” but he didn’t invent the form. A symphony is a multi-movement work, usually for orchestra, usually including a first movement that develops a theme, and another that’s a dance. When Haydn started producing these, people had already been writing them for about 20 years. His first is from around 1758 or so; fellow Austrian Georg Matthias Monn wrote one in 1740.

True, Haydn wrote a lot of symphonies. But so did others: dozens of composers produced dozens of symphonies each. Haydn wrote more than most (probably 107), but his younger friend Carl Ditters von Dittersdorf wrote 120, and 140 come from the pen of a Bohemian composer named Pokorný.

Haydn may rightly be called the “Father of the String Quartet,” however. A baron hired him to compose pieces in which Haydn would play with three of the baron’s friends—his estate manager, his priest, and the brother of another composer. The four happened to play violin, violin, viola, and cello, which quickly became the standard string quartet. The pieces were so successful that other people started hiring other composers to do the same thing.

These early quartets were in multiple movements: a first that developed a theme, and another that was a dance. Add wind instruments and maybe drums for big beginnings and endings, and you have the classical symphony.

Which is just what Haydn started to compose when someone bigger than a baron—a count—hired him. Numbering the symphonies is confusing, because these earliest ones weren’t found or attributed to Haydn until much later, after 104 had already been published and cataloged. So “No. 107 (A)” is probably the actual first of Haydn’s symphonies (it’s too difficult to re-number the rest).

He wrote the one now called No. 1 and others for the count, but then, moving further up the aristocratic chain, Haydn accepted employment with a prince in 1761. Haydn wrote almost all his symphonies for this family of Esterházys. He directed and composed for the brand-new residential orchestra installed at their country estate [pictured above, Haydn Hall, Esterházy Castle].

In 30 years Haydn worked for three princes, the last of whom economized in 1791 and curtailed music. This actually proved to be a huge blessing for Haydn, who longed to be liberated and to compose for others. He visited London twice with huge success, and wrote his final symphonies for English audiences. These we group as the “London” symphonies, but the very last one, No. 104, is officially subtitled “London.”

No, Haydn didn’t invent the symphony. But he infused the form with a vigor, profundity, humor, and audacity unknown until he came along. Mozart learned from him, then Beethoven, and every other orchestral composer who rightly looks to Joseph Haydn as, indeed, the “Father of the Symphony.”

From Haydn’s first string quartets, the beginning of No. 2, performed by the prizewinning Attacca Quartet: