Englishmen in Germany on Fleisher Discoveries 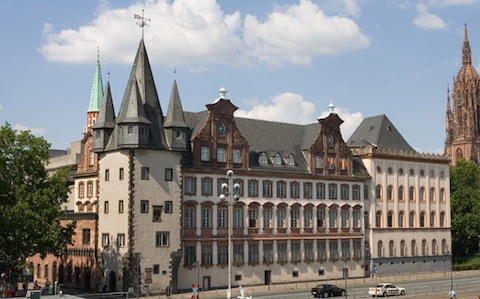 Joseph Hoch was an influential lawyer in 19th-century Frankfurt whose father had been mayor, and whose mother and wife both were of Swiss aristocracy. Money he had plenty of, but no children, so he decided to leave his fortune to the founding of a Frankfurt conservatory for the arts. The Hoch Conservatory (residence pictured) began training students in 1878, almost four years to the day after Joseph’s death. With faculty luminaries such as Clara Schumann, it quickly rose to be a leading German institution, competing with Leipzig and Berlin for students from Europe and elsewhere.

Of the many foreign students at Hoch in the 1890s—about one-quarter of the total enrollment—were five English composers. Their friendship grew from common language and stylistic affinities, but lasted throughout their careers. They came to be known as the Frankfurt Group: Balfour Gardiner, Percy Grainger, Roger Quilter, Norman O’Neill, and Cyril Scott. Since we know Percy Grainger’s music well (and also through Discoveries), and since the Fleisher Collection contains no O’Neill titles in its holdings, today we’ll meet the remaining three.

Cyril Scott’s five titles in the Collection include a Piano Concerto later than this one, but how revealing it is to hear such an early piece by a composer fresh out of school. His later works evolve from impressionist influences to striking harmonies and free rhythms. Admired by Debussy, Ravel, Richard Strauss, and Stravinsky, his music did not catch on with the musical establishment. But recordings have recently been released, largely through the dedication of Scott’s son Desmond and others, and the Fleisher Collection has helped to produce an edition of the large cantata Hymn of Unity.

Roger Quilter populated A Children’s Overture with eleven nursery tunes, creating a beguiling but deceptively supple work for orchestra. His main work as a composer, though, is with art song. His more than 100 works in that genre have enriched the English song literature immensely.

Devotees of Anglican choral music know Balfour Gardiner for his luxuriant 1908 “Evening Hymn,” but his career extended well beyond that. Musical success began within a decade of his leaving Hoch, as conductors programmed his music, including Overture to a Comedy.

His impact on English music is even greater because of his conducting of the music of his Frankfurt friends and other contemporaries. He paid for concerts himself, financed a benefit performance of The Planets of Gustav Holst, and even bought the house of Frederick Delius so that Delius could live there rent-free. The conducting gene remains in the Gardiner family down to this day: Sir John Eliot Gardiner is Balfour’s great-nephew.

The high ideals of a German lawyer named Hoch turned into a legacy that bore fruit for English music. In countless ways we continue to reap benefits.