[Published in the Broad Street Review, 21 Jul 2013, under the title On crossing myself.] 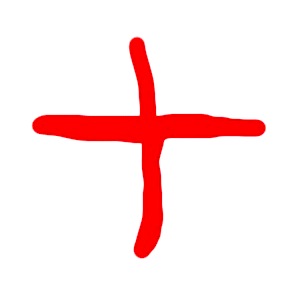 Half the people at dinner—the Protestants—stole glances side to side. The other half made the sign of the cross. These were the Catholics. They couldn’t help themselves.

My wife kicked me under the table and I continued to say grace.

This once happened at Easter dinner at my sister’s, who married a Catholic. Both sides of her family were there, and she had asked me to say the prayer before dinner.

Our Protestant side is Lutheran, and individual Lutherans (hereabouts, at least) are normally allergic to praying in public. But I had surprised everyone—even myself, I suppose—by going to Bible college, and people expect that if you go to all that trouble you might as well be useful and say a prayer when one’s needed.

I was happy to, and thought I’d reach out to the non-Protestants. Not really: I thought I’d have some fun.

Liturgical Protestants—Episcopalians and Lutherans—start their services, as Catholics begin Mass, with this invocation of the Holy Trinity. But outside of that, you hardly ever hear a prayer started that way.

There’s no rule against lay people using it, but I’d wager that Catholics never hear it (either in church or at a wedding reception) from anyone but a priest. And when they do hear it—boom, forehead, solar plexus, left shoulder, right shoulder, solar plexus. As I said, they can’t help themselves.

It worked. I spoke, they crossed, my liturgically aware wife kicked, my sister rolled her eyes, my brother-in-law smiled and shook his head, and I was immensely pleased with myself.

But since being pleased with oneself is not a Lutheran virtue, I knew immediately that this wasn’t my finest moment. No one was harmed, and those words are very good words, but it was pretty weasely to utter them just to get a reaction.

When ballplayers do it

Years later, the Catholics have been getting back at me. Now I cross myself.

I never had. Growing up, we Lutherans lumped the sign of the cross, incense, and ashes on Ash Wednesday into “going Catholic.” Moving your hands around in church would be like, I don’t know, wearing feathers or hopping. Kneeling was about as aerobic as we got.

I remember watching Saturday baseball on TV and how exotic it looked when an Alou brother or another Latin American player crossed himself upon entering the batter’s box. There was no pointing to the sky after a hit—not then—but here was this, the sign of the cross, before any hit could happen. For good luck, I thought? What else could it be?

Lutheran clergy make the sign of the cross, sure. But it’s a big, pastoral gesture blessing the bread and wine, perhaps covering us with it at the Benediction. That’s different: Pastors do that; we don’t.

Then a few years ago, one of those pastors explained to me that the sign of the cross is simply a reminder. Luther himself encouraged its use, because we forget. We forget who we are, we forget what Jesus did. We have words to remind us, but a sign, a physical sign, a real act, hammers it (if you will) home.

“So why are Christians so preoccupied with the manner of your founder’s death?”

Dan Rottenberg, editor of the Broad Street Review, leaned back and asked me this question. Dan has a way of being forward while leaning back, à la Bill Buckley, and a way of smiling while jabbing, like Ali. But lunch was good—Kung Pao chicken is about my favorite thing to eat; even bad Kung Pao chicken is good—and so I didn’t mind.

“I suppose it’s because without Christ’s death and resurrection there’d be no point to Christianity,” I offered.

“Yes, of course,” he said, “I understand the doctrine, but why such a big deal about the cross? What if he had been sent to the electric chair?”

“The Lenny Bruce joke, right. Sure, why not, little chair jewelry around our necks, then. Why is that a joke, by the way? It seems so obvious.”

That pastor was right: I had forgotten. Of course it’s gruesome. The Catholics—through Lutheran pastors, Latin American baseball players, and a Jewish editor—were getting back at me. Man, they’re good.

Actually making the sign of the cross, though, shocks the system. I love the resurrection, but I don’t love this. I’d forget it if I could. But actually making a sign about death—this kind of death—forces me to remember. The price paid pokes me in the forehead, boom, my chest, boom, slams my shoulders back. Ba-boom.

A good friend makes the sign every time he drives past a Catholic church. The body and the blood are in there, and he doesn’t forget it.

Now, when I hear, “In the name of the Father, and of the Son, and of the Holy Spirit,” I do it, too. That’s my way of making a big deal about the manner of my founder’s death. At that instant my entire religion, my whole confidence in what I think I believe, zooms onto a Ground Zero cross—that gruesome thing, hanging in the air in front of me.

Hanging in the air is my salvation. I’d rather have confidence—I’d rather help myself—but I’m at, yes, cross-purposes. The cross says: Get a hit, strike out, live, die, doesn’t matter. Over and over, up, down, and sideways, it reminds my brain, my heart, my strength: There’s nothing I can do—it’s already been done—that’s the big deal.

I make the sign of the cross because I can’t help myself.