[First published in the Broad Street Review, 9 Nov 2013, as “Hearing the right words.”] 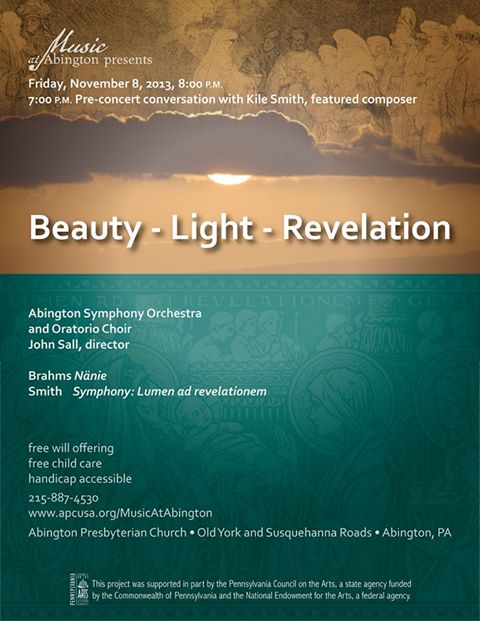 There are many reasons I compose, but—even though there are better ones—one is that composing makes me feel alive. Sometimes a word is spoken by a stranger and you are alive, surprisingly alive.

I’m so happy with the performance John Sall and the Abington Symphony Orchestra put together for my Symphony: Lumen ad revelationem. It was a beautiful concert and I was pleased with how the piece came across. Audience members, friends, players all said sweet and perceptive words to me afterward.

Of course, I wouldn’t admit it to anyone beforehand, but I was worried, as all composers are, with how the music would hold up. After all, it’s been 12 years since I’d written it. I was trying things out that I don’t do anymore, and I’d like to think I’ve learned something in the meantime about composing, about orchestrating, and about high F#s for the oboe (she nailed it!).

But while I have my thoughts about this point or that in the Symphony, I was pleasantly surprised by its holding-upness. More than that, it worked, all the way through. And for that, all thanks go to John and the orchestra for making it happen.

It’s funny how composers hear their own music. I know that the first and second movements are tougher than the third, in the way that Gregorian chant is harder to listen to if you’re not used to it—and most people aren’t used to it. It’s exposed; there’s not the usual sonic cushioning; attention must be paid. I believe it repays the work the listener puts in, but the work must be put in. I was thinking, if only they can get through those two movements, then the third—with its more standard orchestral narrative structure, big chords, percussion, and (I admit it) loud ending—will be cake. (An explanation of the piece is here.)

And they did successfully navigate the first movement with its hushed chanting and pauses. And the second, more songlike but with gnarled harmonies. They played wonderfully. Then the third took off, and there was that big finish.

But at intermission, after my piece was over, a dear, elderly lady waited while I chatted with a friend and then stepped up to me and said that the piece was very nice, and I thanked her and there was a pause and she and I were smiling at each other and I was shaking her hand and was at that point of properly letting go of her hand but she held tighter and wouldn’t let me, and she spoke, in a lower voice, that what really moved her, what really made the whole Symphony for her was…the first movement.

And I felt alive.

(Here’s part of the third movement, which is also the theme music for Discoveries from the Fleisher Collection🙂