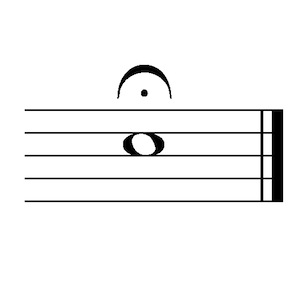 Comedy is all about timing. So is music.

Since timing is so crucial, you’d think that music notation—the composer’s language—would be accurate. But notation isn’t as precise as you’d think. It doesn’t speak so much as it hints, points, glances. It does very well relating elements to each other, but all those arcs, lines, and dots plotted on music paper, all the pictographs precisely drawn, and all the foreign terms spelled out, can’t cover the fact that making music is an inexact occupation.

The fermata exemplifies this perfectly. It’s the “bird’s eye” over a note to tell the performer to hold that note. That’s all it says. It doesn’t say how long to hold it.

A while back, some composers began writing exact durations, in seconds, over fermatas. But in their pursuit of accuracy they missed an important point: Musicians aren’t stopwatches.

Timing how long to stop is what musicians do. Timing of any sort is what they do. Take that away from them and you take the music away from them.

Sure, musicians can pop out rivets of dotted eighths and sixteenths, and they can split a 6/4 bar into 6, 3, 2, or even 4. But like some Einsteinian thought-experiment, they can also linger any old way you want over the second beat in a Viennese waltz and still get to the next bar line in time. And like a sous chef working a clove of garlic, they can slice a septuplet so thin that you can see through it.

Musicians know that the fermata (from the Italian fermare) just means “stop.” They’ll figure out how long.

From a moving train

Besides, musicians know that nothing ever stops, not really. They know, as Shelley put it, that “Music, when soft voices die, / Vibrates in the memory.” So musicians don’t stop notes. They let them go; they release them.

Did you ever notice? Ever look out the window of your train, at the houses and trees rushing by, and then, as you glide into the station—still looking out the window, but now down at the platform slowing to a halt—you keep waiting for it to stop completely, yet it never does?

It’s an illusion from the remembered motion still running past the back of your eyes. But yes, that platform, barely but perceptibly, seems to keep moving.

Music is a train of notes pulling into the station. Maybe it’s after the first bar of music, maybe at the end of a melody, or maybe not until the very end of an hour-long symphony, but somewhere along the line the composer may place a fermata over a note. That bird’s eye is the composer looking at you—even, if you will, the coyote, in mid-air, looking at you. The music stops…but music never stops. You wait, you wait for the musicians…

At that moment, in the mid-air, in the silence, is the music.