The First Three Things I Learn from Bach

[First published in the Broad Street Review, 14 Dec 2013, as “The power of embarrassment (and other lessons from J.S. Bach).”] 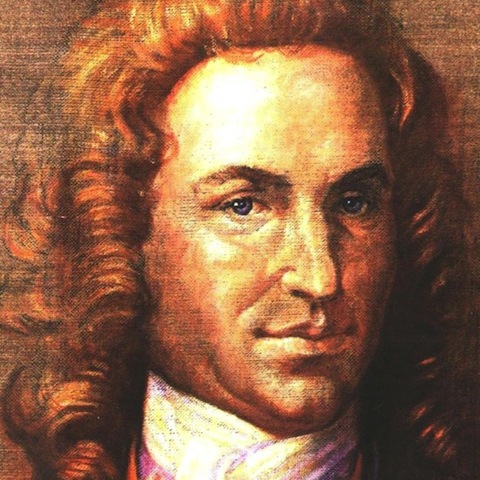 It’s not the “What’re you lookin’ at?” look, no, no. See, he’s smiling. He’s the guy leaning, arms crossed, into that doorway, the second or third down from the storefront on the corner, so confident in his thereness, in his perpetual-motion head-barely-bobbing stillness, that when you drive through his line of sight and his eyes take you in, you feel that he knows you, knows everything about you, sitting in the dark in your car.

You nod to him and a corner of your mouth turns up. It feels good to be known.

This is my picture of Johann Sebastian Bach. Bach lives large, which means—which only ever means—he’s got the goods and he knows it. Living large is not living rich. Having things can make you smile, of course, but living large means something more, something better.

The smile is always there in Bach’s music. It’s always there because Bach knows that he’s blessed. Bach doesn’t grasp, rant, or bemoan, because he has it already, and knows that he won’t lose it. He lives so large that he shares it with you. But if it’s not your thing, he won’t storm the heavens or renounce the earth or curse you for your philistinism: He’s not going to change, just to find out what your thing is. Bach is living; your living is on you.

Take any of Bach, but since it’s Advent, take Cantata No. 140, “Sleepers Awake.” I’ve tried to learn plenty of things from Bach, but these are the first three:

1. If your groove is working, let it work

We always want to change stuff. Whether it’s because we don’t trust an idea to breathe or because we’re showing off, sometimes we composers change stuff just to change. The idea may not be that good to begin with, or maybe we don’t know what to do next, but it’s almost as if we’re expecting to be bored.

That’s sad enough, but the trouble with changing stuff is that it won’t fix boredom. Boredom’s in your soul, not in your stuff. As Gus McCrae tells Lorena, who thinks moving far away from Lonesome Dove to San Francisco will lift her desperation, “Lorie darlin’, life in San Francisco, you see, is still just life.”

Don’t get me wrong: Cantata 140’s opening isn’t great because it doesn’t change. It’s great already, so Bach just gets out of the way. The chunk, a-chunk doesn’t grind us into boredom; rather, it lifts us out of it and pierces us with awe. The groove works, and Bach lets it work.

Scholars tell us about the pietism in Bach’s cantatas, and by pietism they mean the I-love-you-Jesus stuff. Watchmen and mercy and angels around thrones are fine, thanks, but a Soul/Jesus duet—“When will You come, my Savior?” “I come, Your portion.” “I wait with burning oil” “My friend is mine” “and I am yours”—is a bit over the top. There are not one but two such duets in 140, plus solos with kissing and flowers and leaping stags. These aren’t exceptions; the majority of the cantata is this squishy.

The bedchamber entendres embarrass Christians, the come-to-Jesus entreaties embarrass non-Christians, and the romance-novel language embarrasses everybody. God love those pietists; anyone who can make the whole world fidget must be doing something right.

And Bach? He adores it, jumping in with both feet and, in a 1730s Leipzig sort of way, composes roseate, velvety, beaded-lampshade salon music. Sure, it’s Baroque music, but make no mistake—this cantata is shamelessly dreamy.

The music matches the words. Bach has no interest in hedging or in toughening them up, and doesn’t care about not looking cool. If you want eyelash fluttering, listen to the melody of that second duet, “Mein Freund ist mein.” It’s that skippy.

We spend our whole lives trying to avoid being embarrassed, but maybe embarrassment hits us somewhere we need to be hit.

The tune beginning the fourth movement chorale is about the loveliest collection of pitches ever strung together. No matter where you are or where you’re from, you melt a little whenever you hear it. It’s one of the most recognized melodies in the world, and that would be enough for any piece, for any career. But here’s the kicker: It’s not even the main event of that movement.

It’s the background—the background!—to the real tune sung by the tenors: “Zion hört die Wächter singen” (Zion hears the watchmen singing). That’s the melody. Any composer could’ve laid any carpet under it and it would’ve been just fine.

But “just fine” is, so often, not good enough for Bach. He invents a counter-melody so luscious, so complete, so musically full that it fairly bursts into sunrise all by itself. Think about it and a mad cackle begins to rumble in the back of your skull. Only Mozart approaches this utter disregard for melodic extravagance. There are just too many gifts. The care, the love, the overwhelming beauty that Bach expends on a secondary asset simply numbs us into incoherence.

And then he introduces the Philipp Nicolai melody, and it grows, gloriously, supremely, out of the “accompaniment,” and you, sitting there in the dark, begin to see stars, and those stars are taking you in; they’re looking at you, you see, and they’re smiling, because they’ve got the goods, and they know it, and they’ve got you. They know.

Smile back, if you like. It feels good to be known.