Dying, How Do I Love Thee?

[First published in the Broad Street Review, 21 Jan 2014, as “When Vic Morrow meets Vaughan Williams” and reprinted by permission.] 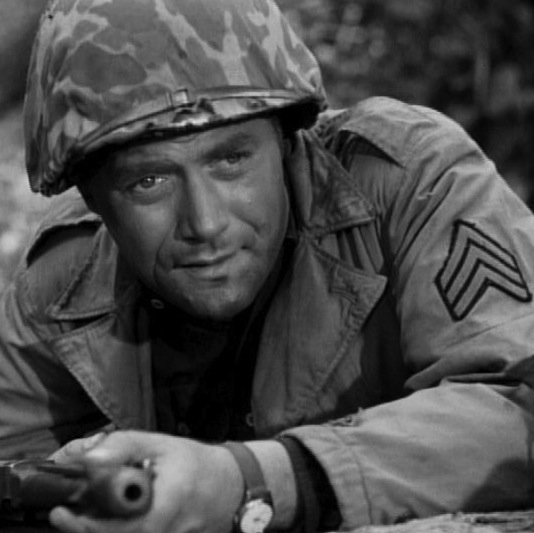 It was a good death.

I sprinted toward the safe spot just past the garden, but Gary Tierney stepped out from behind the maple and opened fire. Eh-eh-eh. Eh-eh-eh-eh-eh. His tommy gun spat, the bullets crashed into my chest, and I twisted through the air, the energy snapped out of my legs. My limbs whirligigged, the rifle spun out of my grasp toward Gerry Doeffler’s fence, and, with a hopeless “Uhh” escaping my throat, I plowed into the lawn. The back of my right shoulder thudded into the turf, my head and legs crumpled in. I bounced once and an arm was pinned under me, but I didn’t move, didn’t breathe. It was a good death.

“Let me try again!” I sang out as I popped up. My chest, I thought, should’ve registered the impact of those bullets better. “Naw, it’s my turn!” said Gary, and the negotiations of playing army continued through the afternoon.

We called it playing army, but in the early ’60s that meant playing Combat! And that meant deciding who would be Sgt. Saunders—Vic Morrow—who was, and who to this day still is, the single coolest man ever to appear on television.

I wouldn’t mind being Kirby, the id with the Browning Automatic, any day. Caje, who spoke French, was swift and deadly, and you had to have a soft spot for the gentle giant Littlejohn. If there were a lot of us, I’d even agree to being Lt. Hanley.

(Nobody wanted to be Lt. Hanley, but in my ear I knew I had captured his carbine, with that sound-effect echo. With the ch from Bach or challah it was KH-ch, KH-ch. The Thompson machine gun, done correctly, was Tttt!-Tttt!-Ttttttt!, but Gary was only six maybe, and you needed a lot of aggression to force the air over the tongue and between gritted teeth.)

But to be Sgt. Saunders was It. Vic Morrow was the smoldering method actor who had ignited the big screen as a thug in 1955’s Blackboard Jungle. Selig Seligman, Combat!’s executive producer and a former Nuremberg Trial lawyer, made Morrow the leader of the squad endlessly fighting Germans and conscience.

Watching Saunders interpret treelines while the patrol scraped along a dirt road—or scan the rooftops of the French village they were always entering, or leaving, or defending, or avoiding—or following his veiled lids as they assessed Hanley’s latest radioed directive from HQ—or seeing him lean into a pocked wall or the socket of a tree and breathe—or gazing with an eight-year-old’s experience as he slung his tommy gun upside-down over his shoulder and rolled his hips forward for one more advance—you could believe in everything anyone had ever said in favor of fighting. Or against it.

Saunders was the hero of old. The true hero has no time for heroes, nor for antiheroes. Beowulf quaffs ale, cracks an arm out of a monster, knows he did right, and laments.

When I set Elizabeth Barrett Browning’s “How Do I Love Thee?,” which I just finished for the Pennsylvania Girlchoir, I knew that the big moment would be in the last three lines: “I love thee with the breath,/ Smiles, tears, of all my life!—and, if God choose,/ I shall but love thee better after death.”

I wanted it to hit like one of my favorite moments in music hits me: the opening of the Five Mystical Songs of Ralph Vaughan Williams. The text begins, “Rise heart; thy Lord is risen,” but before you hear those words there’s a succession of gathering triplets, the building up and layering of mild dissonances that finally break upon a seawall of massive stacked chords of thirds, pounding and pounding while “Rise heart” soars overhead.

My plan was that “I love thee with the breath, Smiles, tears” would heat the voices to a rolling boil, washing, splashing, overlapping. But when I wrote it down, the accompaniment was merely Vaughan Williams lite; the voices, more like singers backing up Andy Williams.

Try as I might, I cannot escape the sounds of my youth, which are locked into the commercial swing I listened to on my parents’ LPs and sang in Christmas and Broadway arrangements in my junior high choir. It also centers so much of the sound of Motown, really my generation’s music. If I could sing “La La Means I Love You” with the Delfonics (OK, Sound of Philadelphia, not Motown), or back up Tex Beneke in “I’ve Got a Gal in Kalamazoo” with harmonies so tight you couldn’t slip a piece of paper through them, that’d be the sweetest nostalgia.

Nostalgia soothes, all right, but it soothes you to death. It makes you a transcriber, not a composer. To create means to drill deeper, to strike the vein that energizes that nostalgia. We all grow up in our own circumstance, and mine is just one mineshaft down to the vein. Once there, we have to make something out of what we hit.

Instincts are good but they only go so far. Then the work starts. Only the thrashing of notes—after a long time, usually—brings ore out of the vein. Slowly, “I love thee” came into view. Little by little I uncovered “the breath, Smiles, tears.” No triplets, just straight quarters, KH-ch, KH-ch. I kept a lot of the thirds (oh boy, did I), but I switched up voice directions and completely re-engineered the bass notes. These suggested new harmonies, which I then tweaked some more.

Tttt!-Tttt!-Ttttttt! One by one, I killed off Ralph, Andy, Kalamazoo, Motown. They were good deaths. I still love them, and they’re still in there somewhere, but for better or worse, they’re dead and they’re me. And in the next piece, I can pop up and sing out to the gardens and fences and maples and treelines and rooftops, “Let me try again.”