Three Things I Learned from the Beatles 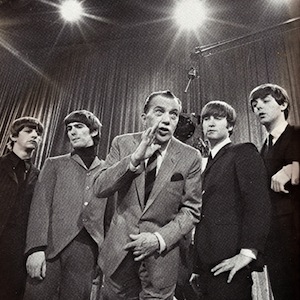 Maybe I was watching Chuck Connors in Branded that Sunday night, the 9th of February, in 1964, but I know I did not see the Beatles on The Ed Sullivan Show. Already at seven, even with elbows akimbo on the floor in front of the TV, I was beginning my lifelong career of missing what was hot.

For instance, in a bookstore not too long ago, an end-of-aisle display stopped me short. I cocked my head like a Jack Russell terrier as I beheld not one, but two volumes of an autobiography of someone whose name I had never heard. It could’ve been Farkas Blitherstaff and it would have been just as formless and void a name to me. The face dominating the large display whispered that every one else walking by knew who he was. But whether he was actor, CEO, politician, or athlete, I was helpless in identifying him. Russell Something. Somebody told me he was once married to somebody.

The depth of my ignorance is oceanic. I am a Marianas Trench of popular irrelevance, unaware if the Dylan or Justin in the headline is a first or last name, or is even male or female.

It was not always thus. From about that Branded age of accountability until my mid-twenties, I attempted with-it-ness. I knew what everyone else knew. So even though I didn’t catch the Beatles’ great American inauguration 50 years ago, I caught up fast. My appreciation for their pop talent continues (while letting the rest of pop-dom roar by), and since classical music didn’t overtake me until later, a few musical lessons from the Beatles have sunk in.

But its rhizomes traveled under the Atlantic and sprang to life in the U.K. in the ’50s, filling warehouse happenings with guys on kazoos, banjos, and washtub basses. Skiffle instruments were homemade or second-hand, but as long as people could hop and yell, it was, for a while, cool. One of the innumerable bands in this underground resurgence was the Quarrymen, fronted by a 15-year-old named John Lennon.

“I Want to Hold Your Hand,” the first U.S. No. 1 hit of the Beatles, is pop by way of skiffle. “Oh yeah, I’ll [clap-clap] tell you something [clap-clap]”: That double hit on beat two is overly cutesy, too jolly to be taken seriously, and that may be the point. It’s a good thing not to take yourself seriously. It’s exactly the kind of element that gives the Beatles their effervescence. They never forgot what they liked as kids.

Everyone talks about the blues in the British Invasion—the American music America was forgetting but that was reinvented and offered back to us by the Beatles, the Rolling Stones, and others. The blues, yes, and gospel and rock, but I’ll always think of Lennon’s first band, and I’ll think of skiffle. Our childhood is, for better or worse, who we are. We disregard it at our peril.

2. If it sounds dumb, keep repeating it until it doesn’t

If “I Want to Hold Your Hand” is pop, then “She Loves You” is skifflized rock. It was the second Beatles’ hit to strike the U.S., although it had been their first No. 1 in their own country. The refrain is as simplistic as it gets. She, indeed, loves you, yeah, yeah, yeah, and they tell you that three times. Three times with the same exact words; three times with the same exact notes. Only at the very end is there another “yeah.”

Think about that refrain and shake your head at the blimeyness of it all. The song is stupefying. Pop music had dumb before, from “Mairzy Doats” to “Sh-boom” (sh-boom, yadada, dadada, dadada, da). But think again and enjoy the brilliance, the reveling singlemindedness of it. It pushes the pedal down, zooming past cute, past arch, and all the way to jumping-up-and-down giddy over the fact that she, indeed, loves you. Yeah, yeah, yeah.

The opening hymn of my Vespers starts with, honestly, six silly notes for the shawm. I didn’t know what to do when I jotted them down, they were so childish. They embarrassed me. So I repeated them. Four times. Once I did that—and it held—I knew Vespers would work.

The Beatles came seemingly out of nowhere in 1964 to conquer America. But as the Quarrymen, they had gigged from 1956 to 1960, writing music, playing, and shifting personnel. They changed their name to the Beatles, and worked on more songs and on their act for three more years, in Liverpool and in Germany. “Love Me Do” (very skiffly in its shuffle—and with harmonica!) reached No. 17 in England in 1962. They’d wait two years to release it in the U.S., where it soared to No. 1.

Their road manager worked them, their music director worked them. They changed drummers from Pete Best to Ringo Starr (who had fronted his own skiffle band earlier), mainly because of Ringo’s adeptness in the recording studio. By the time they hit The Ed Sullivan Show in 1964, they were as experienced a group of under-25-year-olds as you could find. And when they hit it big, they kept working, pushing their songs in all directions and their sound to the edge of 1960s technology.

What’s hot still roars by me, unimpeded. But if I can remember these three things from the Beatles, I won’t mind so much.