Three Things I Learned from Verdi

[First published in the Broad Street Review, 20 May 2014. Reprinted by permission.] 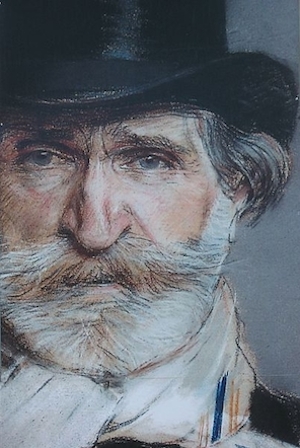 Either through subconscious blocking or natural forgetfulness, whenever I begin a new piece it dawns on me, as if for the first time, that I have no idea what I’m doing. When I recall that this between-the-fingers peer into the abyss happens at the start of every new piece, the fear recedes, but not before modulating through depression, anxiety, and irritability. It may take a few days or all of 12 seconds, but when it finally sidles up to gallows humor I know it’s time to start working. If I still can’t produce anything halfway decent, I’ll listen, in desperation, to some music. And by some music, I mean—above all I mean—someone else’s music.

Best to hear it live. Any style or any composer will do; professional, amateur, good performance or bad, it doesn’t matter. I just need to hear and, for some reason, see something by somebody who’s figured this composing thing out. I never know what piece will turn the trick or why, but something always does. This time, Giuseppe Verdi surprisingly came to the rescue, with his Overture to Nabucco.

I say “surprisingly” because I’ve never been what you might call a Verdi fan. It’s my fault, I’m sure, but while I’ve appreciated and even admired his music, I’ve never fallen for it. When the concert began with the first bar of his overture, however, the cavalry had arrived.

We stroll our well-worn paths, minding our own business, but art wants us to stop that and start minding something else. It might slap us in the face; there are many pieces that slap. Verdi knows, however, that a whisper can get our attention just as efficiently.

This opera overture begins with a quiet trombone choir whisper (see, at :51 in the link above, that upright cimbasso: what a trombone blend, and this is what Verdi wrote for instead of the modern tuba, which is what we’d normally hear these days). Expecting a rip-snorting, indeed, curtain-raising crash, we get a dirge, musing and luscious. What’s going on?

Verdi just got our attention, that’s what’s going on. There’s a story behind the trombones, but right now I wasn’t interested in the libretto. I needed music, and Verdi hit me but good.

So he entertains us, takes us out of our this into a that, and as we settle into the smooth, polished brass he sees that we’re figuring him out. For eight measures he circles and we follow. He bobs, we bob. That’s when, at measure nine, he blindsides us. Even now, even when I know it’s coming, he tags me on the jaw every time.

My friend the former boxer speaks of the punch you don’t see. It isn’t the cinematic roundhouse but the six-incher, the jab that’s a jab, sure, but jab’s not the word. It’s a detonation. He fought long enough to know what it feels like to give and receive those, and he won more than his share. He’s short but very solid, so because of weight classification he fought taller boxers, mostly.

“These guys,” he remembers, “had longer reach, always a couple inches on me, but I could get inside. And once you’re inside, well,” he chuckles, “the best punch is the one that doesn’t travel too far.” Smiling, he continues, “Before the fight, you know, when you touch gloves, this guy’s looking down at me. But at the end, I’m looking down at him.”

Opera composers traditionally toss highlights into the overture one after the other, so it isn’t brilliant of me to observe that a succession of events holds interest. TV and movies have drastically shortened the time between edits; we’re poked with new camera angles every few seconds. This is entertainment writ large: entertainment as ideology: If getting our attention once is good, getting our attention once every three seconds must be better.

But Verdi doesn’t buy that throw-everything-and-see-what-sticks philosophy. He hits and hits again, but when we’re on the ropes, he throws the single punch that hurts most, the one he’s been saving, the one that sinks deeper than them all.

He sings. A tune.

You hear it at 2:53 in the link above, a melody that melts any resistance you may have left after the pounding. He chooses precisely that moment in the overture to sing and at that moment he stops hitting and of all things sings to you and you see, after all, that you were never in this fight, it was his all along. From the moment you touched gloves the fight was over.

You’re thinking, as you drop to the canvas, of becoming a fan.

Verdi had just landed a big contract with the famous opera company La Scala. But a piling up of cares culminating in his wife’s death brought him to the abyss. Depression made Verdi, not yet 40, believe that he could no longer write. But La Scala’s director pleaded for one more opera, and gave him this libretto about Nebuchadnezzar and Hebrew slaves in Babylon. So Giuseppe Verdi composed Nabucco. It was, as they say, a hit.

And for me, it’s time to start working.