And Good in Every Thing 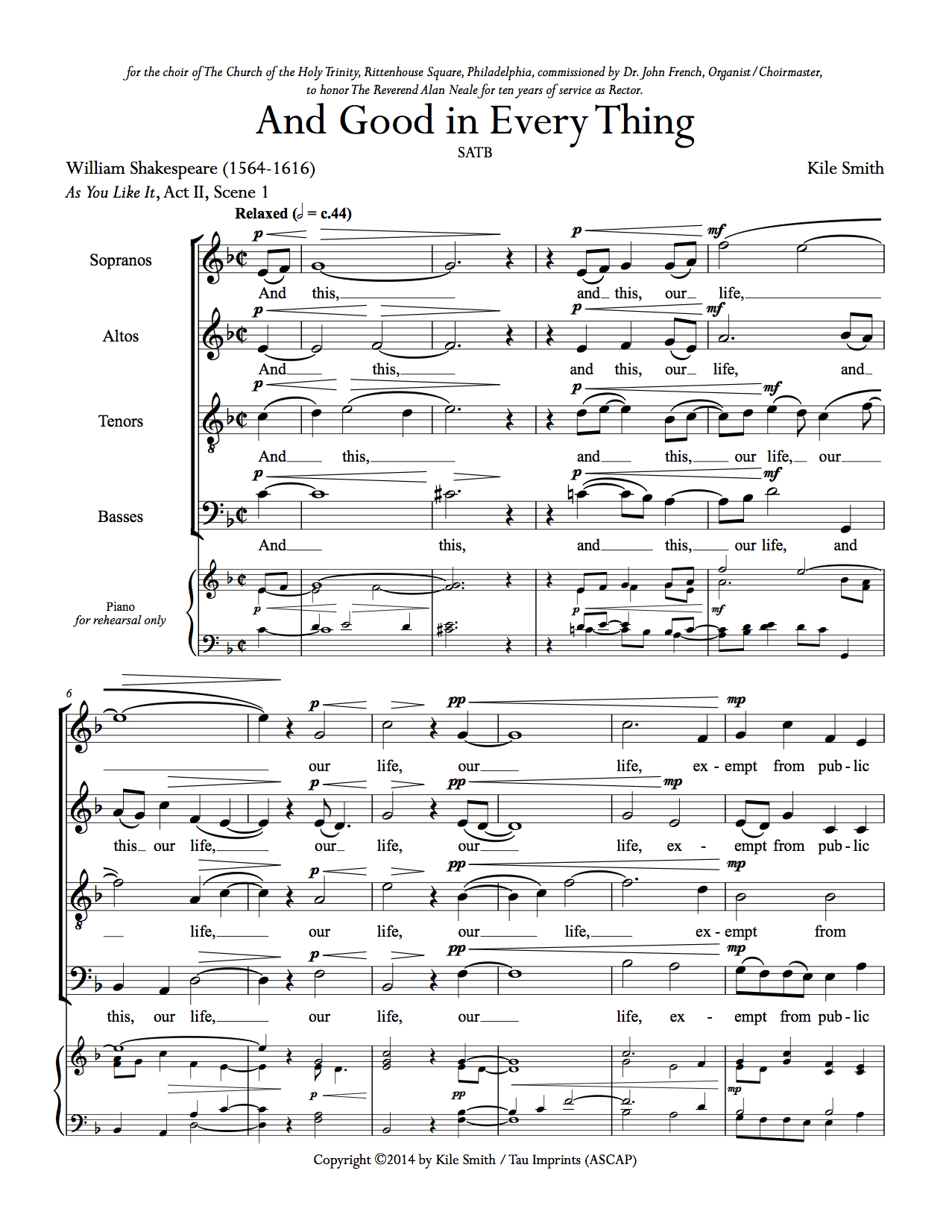 And Good in Every Thing
SATB, 5 minutes

Commissioned by Organist/Choirmaster John French for the choir of The Church of the Holy Trinity, Rittenhouse Square, Philadelphia, to honor The Reverend Alan Neale for ten years of service as Rector. Premiered 15 June 2014.

This work caps my first year as Composer in Residence at the Church of the Holy Trinity, and I am grateful for the support of Alan Neale, the vestry, the choir, and of course, John French. They have used my anthems throughout the year, but John wanted to commission something special for Alan’s 10-year celebration to be observed, fittingly, on Holy Trinity Sunday.

When John mentioned the possible text he was rolling around in his mind for this, I laughed incredulously. I love Shakespeare, wish I knew more, and am no expert. But when he began the first words of the text, I recited it along with him because they were the very words I memorized for my brief acting stint at the Free Library of Philadelphia, which I wrote about here.

And this, our life, exempt from public haunt, finds tongues in trees, books in running brooks, sermons in stones, and good in every thing.
—William Shakespeare (1564–1616), As You Like It, Act 2, Scene 1

The music for the beginning of the text, up to “sermons in stones,” almost wrote itself. It rarely happens that I compose quickly, and I am wary of the result when I do, but my joy on pronouncing it good was quickly tempered by the fact that my putatively five-minute anthem had used up all of 60 seconds.

I had only five words left for the remaining four minutes of music.

I didn’t know how I was going to wriggle out of this, but just kept writing, trying different ways of setting “and good in every thing” (I love that “every thing” is two words). I lingered on “and” almost, I admit, to buy me some time, but it is something I have found I love doing: accenting supposedly unimportant words.

But then a musical phrasing fell into place that seemed to welcome slight variations, subtle shifts from E-flat to C minor chords, and as I toyed with it, it occurred to me that it could go on for a while. And it struck me that I could spend an entire four minutes on those five words and those two sonorities, and as I got part-way through I said to myself, “Really? You’re going to do this?” and I answered, “Why not?” and I just kept at it.

It isn’t a “sacred” anthem in that the words are not religious nor of course from Scripture, but in setting this, I thought about what would the music be like if I believed, if I really believed, that there was good in every thing. The first reading for Holy Trinity Sunday—which I had forgotten, but which I was reminded of before church by Alan—is from Genesis, where God looks on what He created, and calls it good.

Here’s the live recording of the premiere. This also is, by the way, the piece wherein I use the infamous chord I wrote about here.