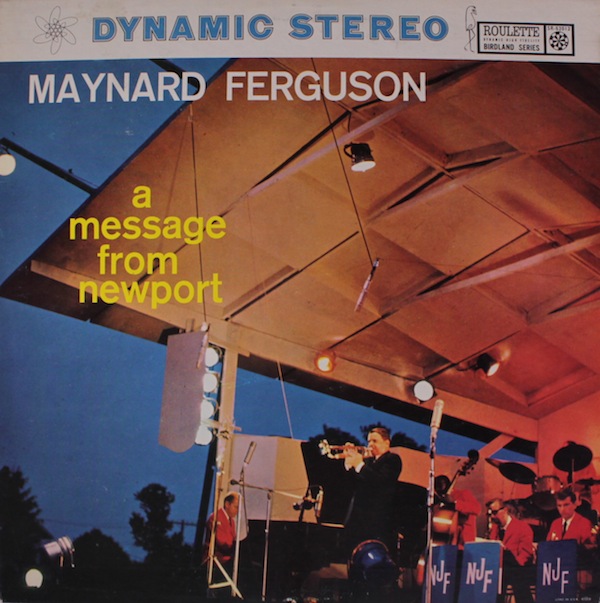 The bear, dozing in the afternoon heat, shifts, and a vast paw thuds the loam. A startled mockingbird takes off, lands on a safe limb, and screeches a complaint.

So begins, as I hear it, “Frame for the Blues” by trombonist and composer Slide Hampton. Sid Mark for years used to sign off “The Mark of Jazz” on WHAT-FM with it. But because I already knew it from an LP my parents had, “Frame for the Blues” prompted one of the first stirrings of that strange mixture of pride and gratitude you feel when you hear something and recognize it.

A Message from Newport with Maynard Ferguson and His Orchestra, was recorded live at the 1958 Newport Jazz Festival. I listened to lots of Top 40, but when I wanted to hear something special, it was often the vinyl of Maynard that slid over the spindle in the living room’s hi-fi console.

I think I could almost replay the entire LP in my head, from “Fan It, Janet” to “Three Little Foxes.” But “Frame for the Blues”—Side B, Track 2—is the hymn to the sweet brilliance that was the Maynard of the late ’50s. Three things that have stayed with me:

The sign that your music isn’t working usually isn’t one thing or another. Usually, it’s that it isn’t one thing or another. A tune is “too pretty,” you think, so you pollock onto the canvas a nontonal pitch aggregate, trying to impress an imaginary professor. If you’re worried it’s too ugly, you buff out tritones or resolve unresolved notes, hoping to hold onto an imaginary audience. Or you flash some sonic bling for street cred.

But the sign of bad music isn’t prettiness or violence or bling or any one thing. It’s the lack of one thing; it’s hedging. “Let your yea be yea, and your nay, nay,” Jesus told his disciples, and Mr. Miyagi warned Daniel-san, “Walk left side, safe. Walk right side, safe. Walk middle, sooner or later, get squish like grape!”

“Frame for the Blues” is swing through and through, slow and sure of itself. I love its unabashed, large-group bring-it power, especially when it’s quiet. The swung rhythm—somewhere between triplets and dots—never stops (no one really knows what swing is, but we know it when we hear it). It’s an unrelenting feel of soft shuffle, but when it’s poked…

2. Punctuation can be soft

At 2:06, Maynard flings out a run of straight eighths against the swing. Only later does it occur to you how righteously cool that is. It’s nothing new. Hindemith got the two-against-three from Brahms, or they both got it from Bach, or all three got it from Josquin (funny how B, B, and H all loved old music). Cuba got it from Spain, who got it from the Canary Islands, maybe, or they all got it from Africa.

And then every once in a while, in between phrases, Hampton shows his arranging chops by holding back. Great ones don’t show off. They don’t even show anything sometimes, so instead of squealing the saxes or releasing a trombone bombardment, Slide keeps his poker face and holds up two fingers to the pianist, who plunks a soft octave (4:49) as punctuation.

A string of straight eighths or a quiet octave: It’s not a big thing, and that’s the point. Get the job done and move on. No need to shout.

But Maynard Ferguson is known for one thing. He could play the trumpet higher than anybody else. Sometimes in his career he might have relied on it too much, but in the Message from Newport days he wasn’t afraid to just flat-out play jazz. So is there a high note in “Frame for the Blues”? You bet there is, the highest note on this album.

It’s a high C. Keep in mind that the trumpet range is basically a soprano’s. But this C isn’t the treble clef plus two lines above, about the highest note the highest soprano soloist ever has to sing. It isn’t the F above that, Mozart’s Magic Flute Queen of the Night high note, which only the rarest soprano ever tries, and which a trumpeter without a special, small trumpet best stays away from. Maynard’s C, on a regular old trumpet, is five notes above that high F, an octave above the high C. Take a treble clef, add another five lines, and a space, and start to gasp for oxygen: Nobody plays up there.

So Maynard and Slide wait and wait until the very end of the piece, until the last chord the band plays. Then, and only then, does Maynard unleash that C. Notes that high, truth be told, you don’t even care if they’re pretty. Unbelievably, Maynard’s is actually beautiful. Then he lets it float down, down, way down, into the band, and the piece ends.

This is virtuosity, as tasteful as it gets. Save your weapons for when you need them. The great ones have them, but don’t always have to use them. The bear can sleep in the afternoon, anywhere he likes.