Discoveries from the Fleisher Collection, Saturday August 2nd at 5 pm

The gentleman from Philadelphia was heir to a textile business but his passion was music. An amateur violinist and violist, he founded a club for young people to play music at a time—1909—when there was no instrumental music instruction in the Philadelphia schools. He obtained a building, hired a conductor, and brought the students in to play orchestral literature, as much as he could buy. He called it the Symphony Club.

Edwin A. Fleisher (1877-1959) quickly realized, however, that he would need to go to the source of orchestral music. Music publishers did not have the international reach, through agents and distributors, that they would later have. So Fleisher traveled to Europe, purchased music, signed agreements, and shipped scores and parts back to the United States. He was building what would become the largest library of orchestral performance material in the world. It was the library of the Symphony Club, and is now called the Edwin A. Fleisher Collection of Orchestral Music. It is housed in the Free Library of Philadelphia.

The Symphony Club held readings/rehearsals every week, for younger and older students, for strings only and for full orchestra. They learned chamber music and theory, and even had a choir. Occasionally they’d give public concerts. Boys and girls, blacks and whites, rich and poor all took part, with Edwin Fleisher footing the bill, paying for salaries, music, and later, the hand-copying of instrumental parts where none existed. 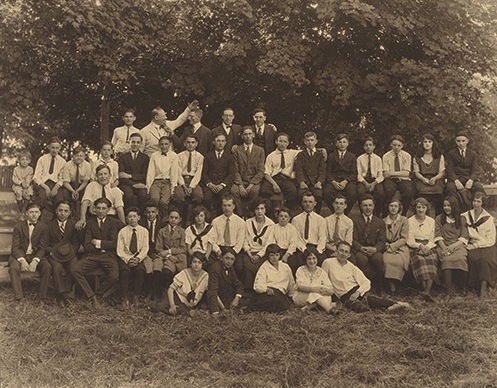 The library grew to include American and Latin American music, but in the beginning the music was European through and through, the spine of orchestral literature, music popular at that time and music that had been popular in previous decades.

Because of Fleisher’s access to European publishers, the Symphony Club often premiered works in Philadelphia that would later become staples of orchestral programs. That’s the case for the two Czech composers on Discoveries today. Josef Suk’s Serenade for string orchestra and Vitezslav Novák’s Slovak Suite, which show up on programs all over the world, had their very first Philadelphia hearings on Symphony Club concerts.

Suk and Novák, born within a year of each other, were colleagues and friends, and in the vanguard of the new generation of composers reaching beyond folk influences to a more international sound. They could not escape—nor did they really wish to—the teaching and influence of Dvořak. Suk, in fact, had married the master’s daughter. But the future of Czech music continued bright and world-renowned in large part to their own legacies.

So it was, that when Edwin A. Fleisher toured Europe in the early years of the 20th century, prodding publishers for the latest in orchestral music, he returned with works by Josef Suk and Vitezslav Novák (as well as by Dvořak). Philadelphia first heard these works because of the Symphony Club, because of its library, and because of the gentleman from Philadelphia who founded them both.

String students in Osaka performing the fourth movement of the Serenade by Joseph Suk: