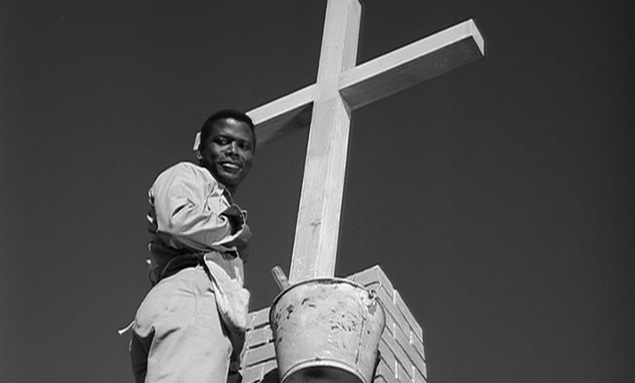 Sidney Poitier as Homer Smith in Lilies of the Field

It makes me cry. Aaron Copland’s setting of “Shall We Gather at the River?,” from his Old American Songs, will do that to me, even though I’m determined, this time, that it won’t. It will. The baritone Ron Loyd told me that he sang it at his mother’s funeral and only now can get through it without breaking down. The funeral was five years ago.

“Shall We Gather” is a good song, perhaps even great, but would it be great because I cry? By itself, no. A parent cries, looking at a refrigerator-mounted stick-figure drawing, because of the artist, not the art. So we dismiss emotion as subjective, and therefore inappropriate for judging art. But should we?

Well, emotion is everywhere, and untangling it from judgment is difficult. I may love the song because I’m attached to the religious sentiments in it—except the sentiments aren’t particularly religious. “Saints,” “angels,” and “God” are in the original 1864 hymn by the Philadelphia-born Baptist minister Robert Lowry. Copland brought those over to his setting, but left out the verse with “Savior” in it. So the appeal is wide, nonsectarian, and only vaguely religious.

I don’t cry at “I Bought Me a Cat,” also from Old American Songs, but do I like it less than “Shall We Gather”? Maybe, but my preference may have little to do with the quality of the song.

Perhaps I cry because Copland’s music was my first classical music infatuation. Brahms was my first love, but Copland (along with Vaughan Williams) was puppy love. Sentiment has waned and waxed in the intervening decades, and I appreciate them more now, but I won’t deny that I’m a sucker for the sound of both composers.

I didn’t realize until much later that I loved the film Lilies of the Field largely because Jerry Goldsmith’s score sounded like Copland to me—before I knew of Copland. Sidney Poitier piloting his station wagon down that dusty highway to a bouncing bass line was a precursor—for me—of Billy the Kid. I saw the movie as a child but when I first heard Copland’s ballet (written 25 years before Lilies) in college I immediately thought of that station wagon and let out an audible “Ohhh….” Nothing against Goldsmith, who’s brilliant. There’s really no Copland in the film score. Just that sound.

But should I be making so much of tears? After all, there’s music I like more than “Shall We Gather” that does not make me cry. Mozart, for instance. I laugh at Mozart—I laugh because I’m incredulous. Truthfully, I have to watch myself at concerts where Mozart is performed, because I have an almost uncontrollable desire to giggle. He writes one unbelievably supreme melody, and then tosses in another one even more unbelievable. He doesn’t develop themes, he strings impossibly glorious tunes together, one after the other, which he really ought to just stop doing. And then I laugh.

And then there’s Bach. With Bach, I don’t laugh or cry. No, with Bach, I give up. There is no composer more guaranteed to make me want to stop composing than Bach. The first bar, the first two beats of St. Matthew Passion and my chin hits my chest, my lips purse, my head swivels from side to side three or four times. Just…just, come on, cut it out, This Isn’t Fair.

Wait, I did cry once at Bach, at a Settlement Music School children’s recital. A little girl (not ours, so I can’t blame this on parental emotion) sat down at the piano to play a Bach two-part invention. She haltingly worked through it, pausing here and there as she wrested the notes from her memory. All of a sudden the tears were flowing. Not hers; she didn’t seem upset at all as she discovered the ending and took her bow. I wiped my face during the applause.

So emotion is everywhere; how can we dismiss it? I think we shouldn’t. I don’t dismiss it any more than I dismiss objective judgment. Some like to dismiss objectivity, but their hearts aren’t in it. Bach isn’t better than the Beatles, they say, he’s just different. The best argument against that is this: They don’t believe it. I’m sure there are professors teaching that there’s no objective truth. Okay, hold up their direct deposit for two days, and you’ll find that This Isn’t Fair all of a sudden achieves metaphysical certitude.

A note is in tune or out of tune. It’s no good saying that there are dozens of ways to tune, that different tunings are enculturated, that an oscilloscope proves that nothing is perfectly in tune. Nobody knows when dusk turns into twilight (or is it the other way around?): so what? We could spend the rest of our lives arguing over when evening begins, but everyone believes in night and day.

So it is with good and bad. We know them objectively, and we feel them emotionally.

I heard Ron Loyd singing Copland because he was singing in my Psalm 46, for baritone, chorus, and orchestra. At the piano rehearsal two days before the concert I was looking over the pianist’s shoulder while she accompanied Ron in “Shall We Gather at the River.” There’s hardly anything on the page. The tune; the dotted notes; the descending bass line; a wisp of a reply over the singer, then under; that’s it. This is good, I thought. This is so good.

But with that I thought of all the emotions, of stick-figures and station wagons and dust and laughing, of day and night, of saints and angels, of infatuations and funerals and of chins hitting chests, and I looked at the page with nothing there, and I looked at the baritone singing.

And then I cried.