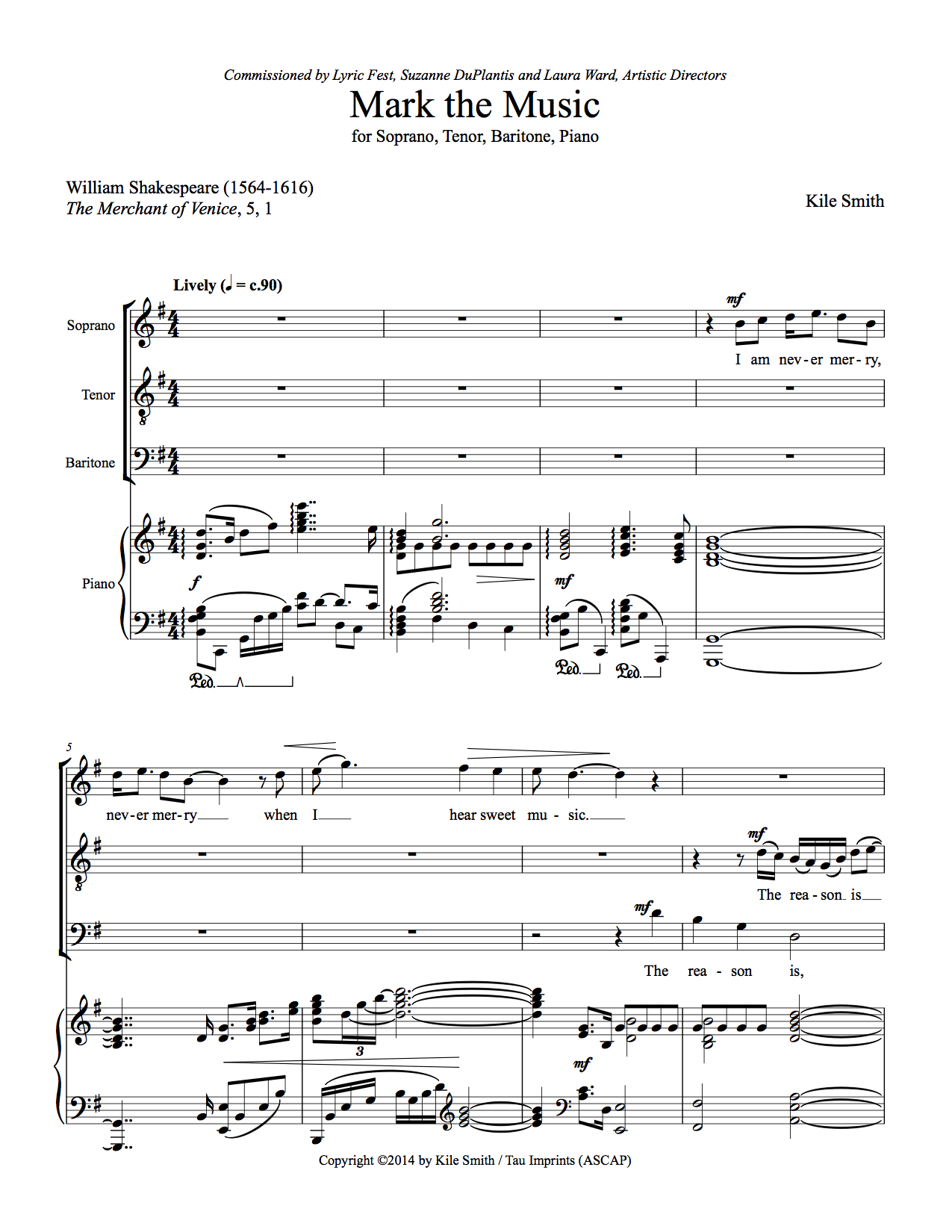 Mark the Music was written as the closing piece for concerts entitled “Much Ado about Shakespeare.” Though I did lecture on Viennese lieder on Lyric Fest’s first concert of the 2014–15 season, this would be my introduction as their new Composer in Residence.

My goal was to make an operatic scena out of Mark the Music, a set-piece (an Act 1 finale?) for the three singers on this concert. Lyric Fest co-artistic director Suzanne DuPlantis suggested the text, and while I was immediately taken with it (see below: it includes the familiar warning about those who have no music in their souls), I needed to find a way to have three singers do the work of but two characters. (I took as a good sign, however, that one of the singers and one of Shakespeare’s characters were named Jessica.)

I envisioned a little drama:

The woman states her problem, and the men, trying to impress, try to help. The baritone starts, but the tenor interrupts. The soprano, she likes that. The baritone tries again, with the same result. But at “savage” or maybe even “bellowing,” her eye wanders to the baritone. She catches herself at “a modest gaze.” All three sing together at “sweet power of music” and are one in purpose through the remaining fast section, the bulk of the piece, with even a comradely duet for the men.

I edited just a bit of the text out of the Shakespeare scene, partly so that the tenor wouldn’t completely overwhelm the baritone’s offerings, but mainly to keep up the dramatic motion. The music, I hope, conveys sternness without menace, with a strong character of exultation, of the joy of presenting music.

JESSICA: I am never merry when I hear sweet music.
LORENZO: The reason is, your spirits are attentive:
For do but note a wild and wanton herd…
of youthful…unhandled colts…
bellowing and neighing loud,
Which is the hot condition of their blood;
If they but hear…a trumpet sound,
Or any air of music touch their ears…
Their savage eyes turn’d to a modest gaze
By the sweet power of music…
The man that hath no music in himself,
Nor is not moved with concord of sweet sounds,
Is fit for treasons, stratagems and spoils;
The motions of his spirit are dull as night
And his affections dark as Erebus:
Let no such man be trusted. Mark the music.
—from William Shakespeare, The Merchant of Venice, 5, 1