On Discoveries from the Fleisher Collection, Saturday, January 3rd, 5-6 pm. 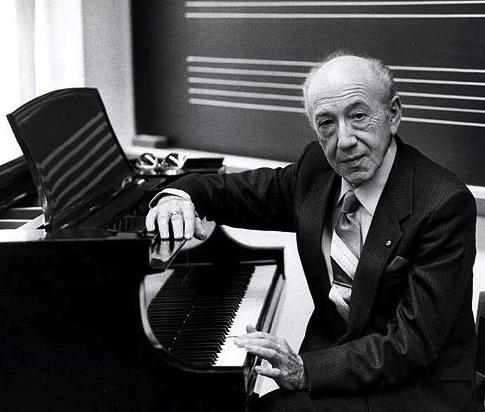 One hundred years ago saw the birth of David Diamond, who would enter the first rank of 20th-century American composers. His most-played work, Rounds for string orchestra, is the only work of his many people have heard, so we will not play that today. Instead, a large work for orchestra, a small work for orchestra, and a memorial to a composer who was a great influence will walk us through his career.

One may wonder why someone who is held in such great esteem isn’t played more, but that points up the dichotomy of David Diamond, and the sometimes-difficult trajectory of his music. He was born in Rochester, N.Y. in 1915 and died there in 2005, but in between lived in Cleveland, New York City, France, and Italy. He was immensely talented and early on played violin and composed. His family moved to Cleveland, he studied at the Cleveland Institute of Music, and when the great Maurice Ravel visited the Cleveland Orchestra, Diamond visited him. The French composer looked at the 13-year-old’s compositions, recognized his talent, and told him that he must study in Paris with Nadia Boulanger.

He would do that (as had many other American composers, including Aaron Copland) eight years later, after a stint at Eastman in Rochester and then in New York City, studying with Roger Sessions. Finally in Paris with Boulanger, he studied Ravel’s music as part of his training. Ravel died in 1937, and Diamond wrote the exquisite Elegy to the Memory of Maurice Ravel.
Back in the States he played violin in theaters, wrote some commercial music, and began to produce vast amounts of chamber and orchestral pieces. The earliest of his 11 symphonies appeared at this time, as did his Concerto for Chamber Orchestra in Two Parts, filled, as most of his music is, with fugues and counterpoint, every bit of it lyrical but not always warm and fuzzy at first hearing.

And he was not always warm and fuzzy at this time. Stories of his being tossed from rehearsals and of other altercations followed him. He later admitted, “I was a highly emotional young man, very honest in my behavior, and I would say things in public that would cause a scene between me and, for instance, a conductor.” Not good for a career, and yet he continued to produce.

Shifting fashions in high-octane contemporary classical music left him, for a time, without much of a profile beyond Rounds, but fortunately he lived to see a strong resurgence of interest in his music, after teaching in Italy and elsewhere and, for 25 years, at Juilliard. Conductor Gerard Schwarz’s recordings have led much of the comeback.

The Symphony No. 8 honors Copland’s 60th birthday; we’ll hear American similarities and differences in the voice of David Diamond. A National Medal of Arts in 1995, among many awards, recognized his importance to music, and 100 years after his birth, we recognize David Diamond’s voice as one we still need to hear.