In This Blue Room 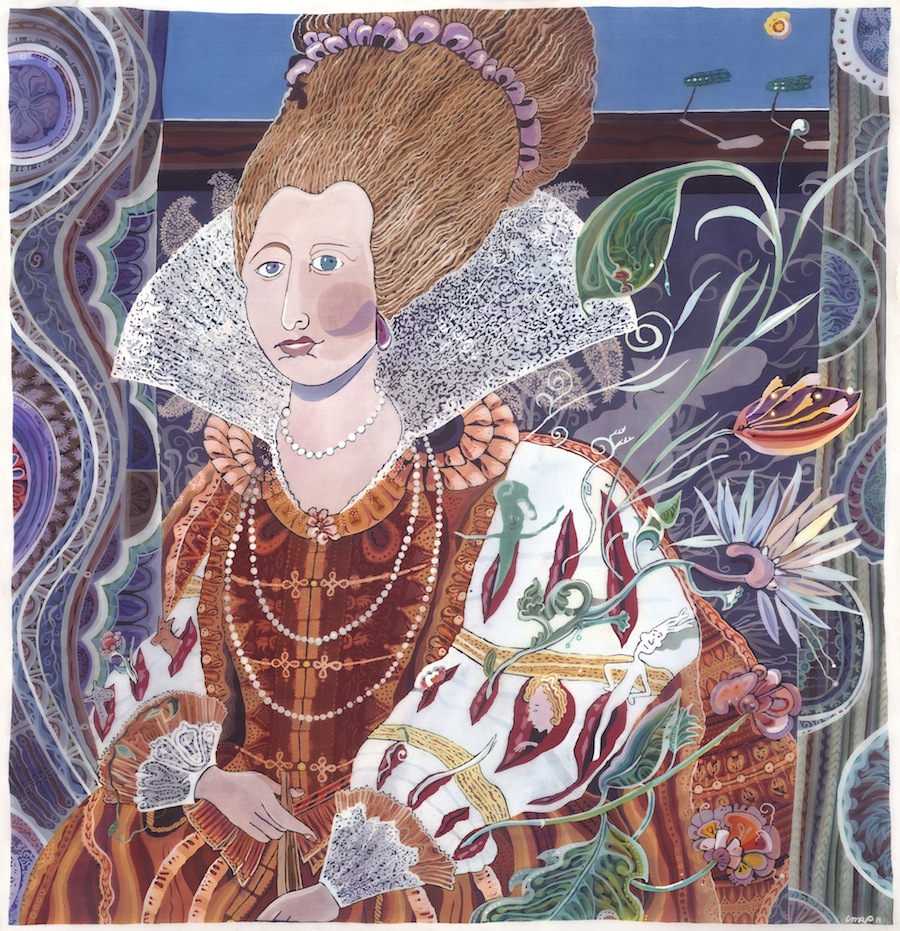 In This Blue Room is a 17-song, 45-minute cycle commissioned by Lyric Fest on poems of Julia Blumenreich, Susan Fleshman, Siobhan Lyons, and Donna Wolf-Palacio, which are based on the batik artwork of Laura Pritchard. It premiered 13 and 15 March 2015 with mezzo-soprano Suzanne DuPlantis, baritone Daniel Teadt, and pianist Laura Ward. The complete text is below these notes.

“Smith … has an immediate appeal due to his melodic gift and the ability comfortably to inhabit a realm that incorporates elements of jazz, pop, and the world of art songs. His blending of these elements does not sound forced or artificial, and many of these songs will have you tapping your toes or humming along.”—Fanfare

Here is the premiere performance from 15 March 2015 at the Academy of Vocal Arts. The music begins at 18:40 (video start time for each song is listed below):

John Thornton put together a very nice 12-minute video of me, speaking before that performance. There’s less of me talking, so that in itself makes it better:

Jazz, blues, pop standards, and vocalese à la Lambert, Hendricks & Ross hover all around In This Blue Room. The color blue suffuses the paintings and the poetry; that and the syntax of the poems all suggested that a jazz sound-world might be an appropriate approach.

“Watermelon eyes” jumped out at me first, and became the piece for me. I heard a woman’s low voice, like Sarah Vaughan’s, singing those words, kind of scooching and dragging into each note. I heard quarter-note triplets—lazy triplets—three notes in the time of two. It was swing rhythm that came in and took over, which is (more or less) triplets. And that’s when I decided that the whole cycle would come out of jazz, out of swing and blues.

I first planned to use a promenade—as Mussorgsky does in Pictures at an Exhibition—between the songs. When I started composing #1, “Watermelon eyes” (18:40 in the video above) I began it with these trodding bass notes, like someone walking through a gallery, looking at the paintings. But it took on a life of its own as the beginning to this one song.

So I left it alone, and, since two poems were based on the one painting, 56, I combined them into a duet, which is now #11, “Like lost beads / Watermelon eyes,” with the idea that it could serve as duet, mezzo solo, and baritone solo. The voice and piano parts are exactly the same each time they come around. The trick was to have them not only fit together but also work separately, and, of course, interesting enough so that you could stand listening to them over and over. 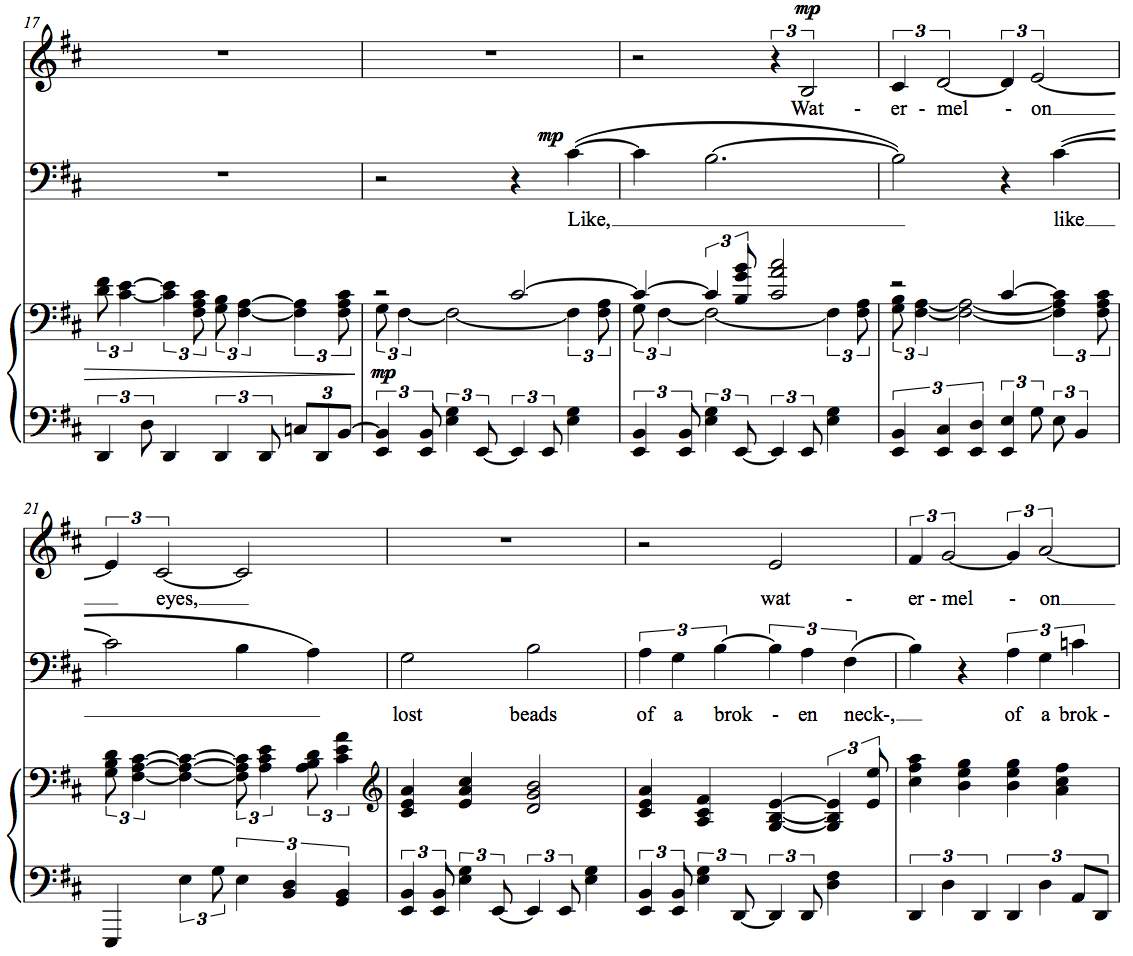 #2, Reading Others (21:25) needed to sound busy and inward-looking at the same time, with the most expansive music accompanying the confiding in her “leather-bound journal.” The baritone attempts to soothe her in #3, “Dull your senses” (23:21). This is an infrequent instance where I repeat words (maybe not that infrequent), and place them in a different order, so that instead of ending with “you should be giving the directions,” his final advice is “you should be.”

There are two octatonic, or 8-note, scales. These alternate half- and whole-note steps, and they’re a favorite of Stravinsky, Prokofiev, and many other composers. I have never knowingly used an octatonic scale in my life until #4, “So I can find myself in a crowd” (26:32).

The persona of the crooner inhabits #5, “Eye shadow” (27:40); those descending chromatic triplets I took from, among uncountable arrangements, Del Paxton’s fill to Guy Patterson’s “Spartacus” at the end of the movie That Thing You Do.

After the baritone’s “Like lost beads” (32:49), the introduction to #7, “Diary 1” (35:30) resonates very much with the excessively chromatic, reverberating violin sound of Jackie Gleason’s Honeymooners theme and so many Mantovani arrangements. The song itself is inspired by the voicing of a Sarah Vaughan torch song; the tempo marking is “Slow torch.” 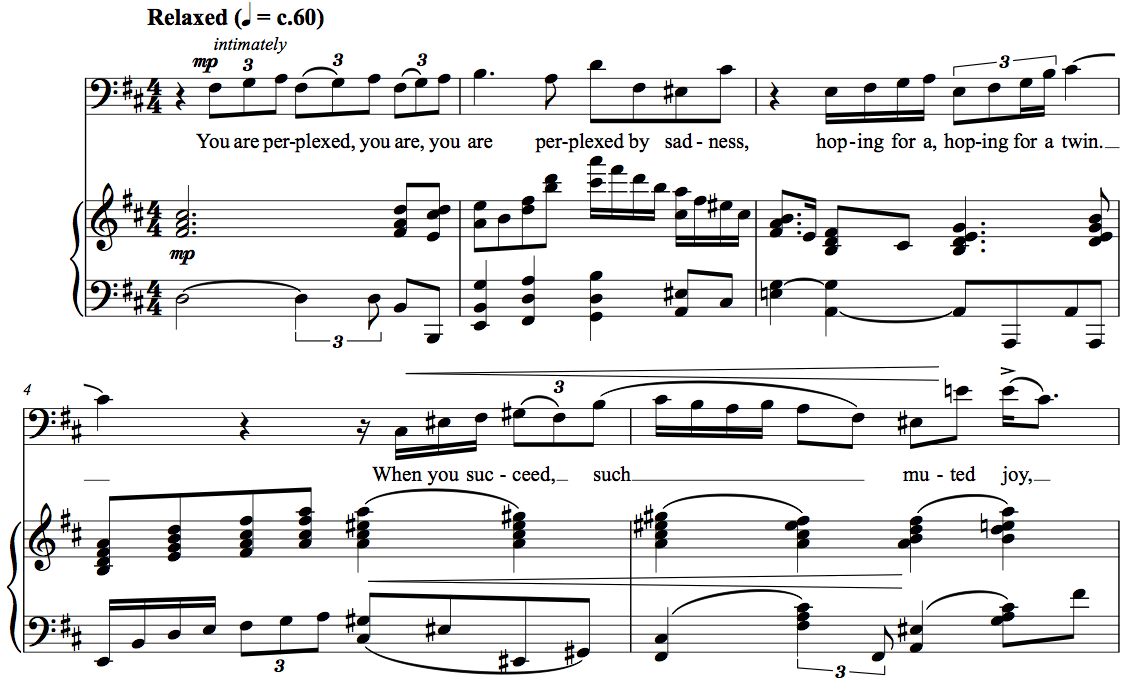 The baritone then sings #8, “You are perplexed by sadness” (39:35). The chords come right from Eddie Jefferson’s “There I Go, There I Go Again” (which are words to “Moody’s Mood for Love,” which is a sax solo over “I’m in the Mood for Love”). This is a song that has haunted me all my life. #9, Wings (42:45) is all irrevocable parallel 7th chords—fauxbourdon from Debussy and Dunstable—relieved by a fughetto at “As if on cue two angels.” Then the baritone, not to be denied his octatonic scale, gets one in #10, “The Sleeves” (44:30). 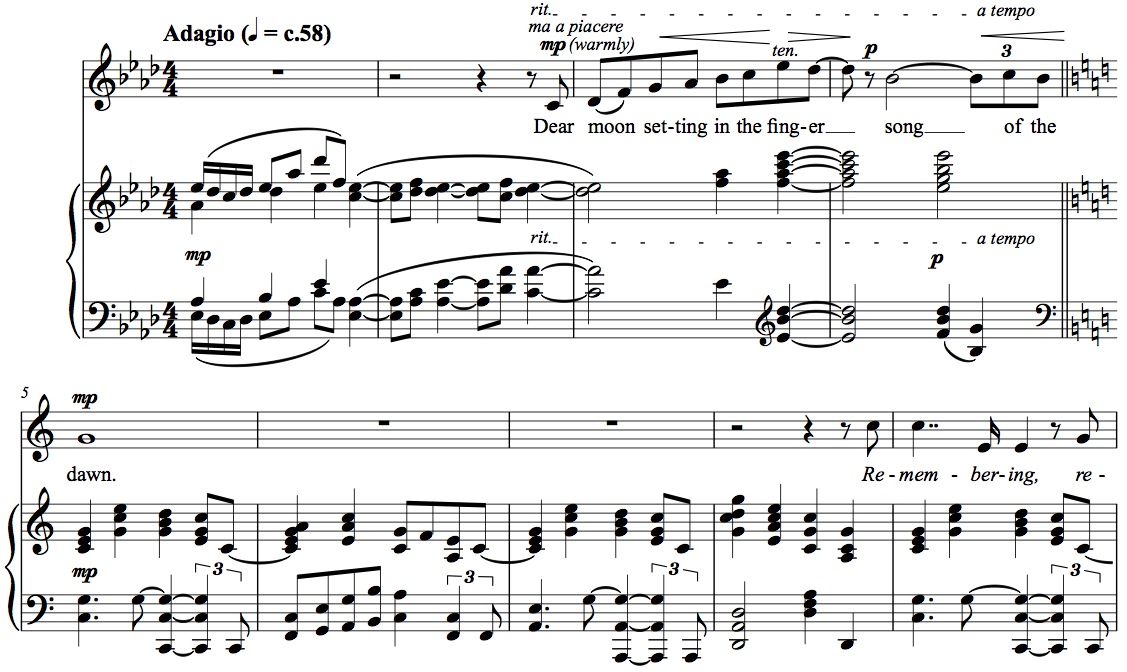 #14, “She Sees She Dresses In Her Subjects” (58:57) uses, almost verbatim, the chord progression from “Moonlight in Vermont,” a song with one of the most mesmerizing bridges I’ve ever heard. I repeat words out of order in this, too. #15, “Anima and Animus” (1:02:03) cried out to be a duet, and is one of the examples in the cycle of my writing what I hoped would sound like an improvised walking bass line, which turned out to be incredibly difficult to get right, if I did get it right. I am a former mediocre jazz bassist, and perhaps I was trying to exorcise some ghosts here. 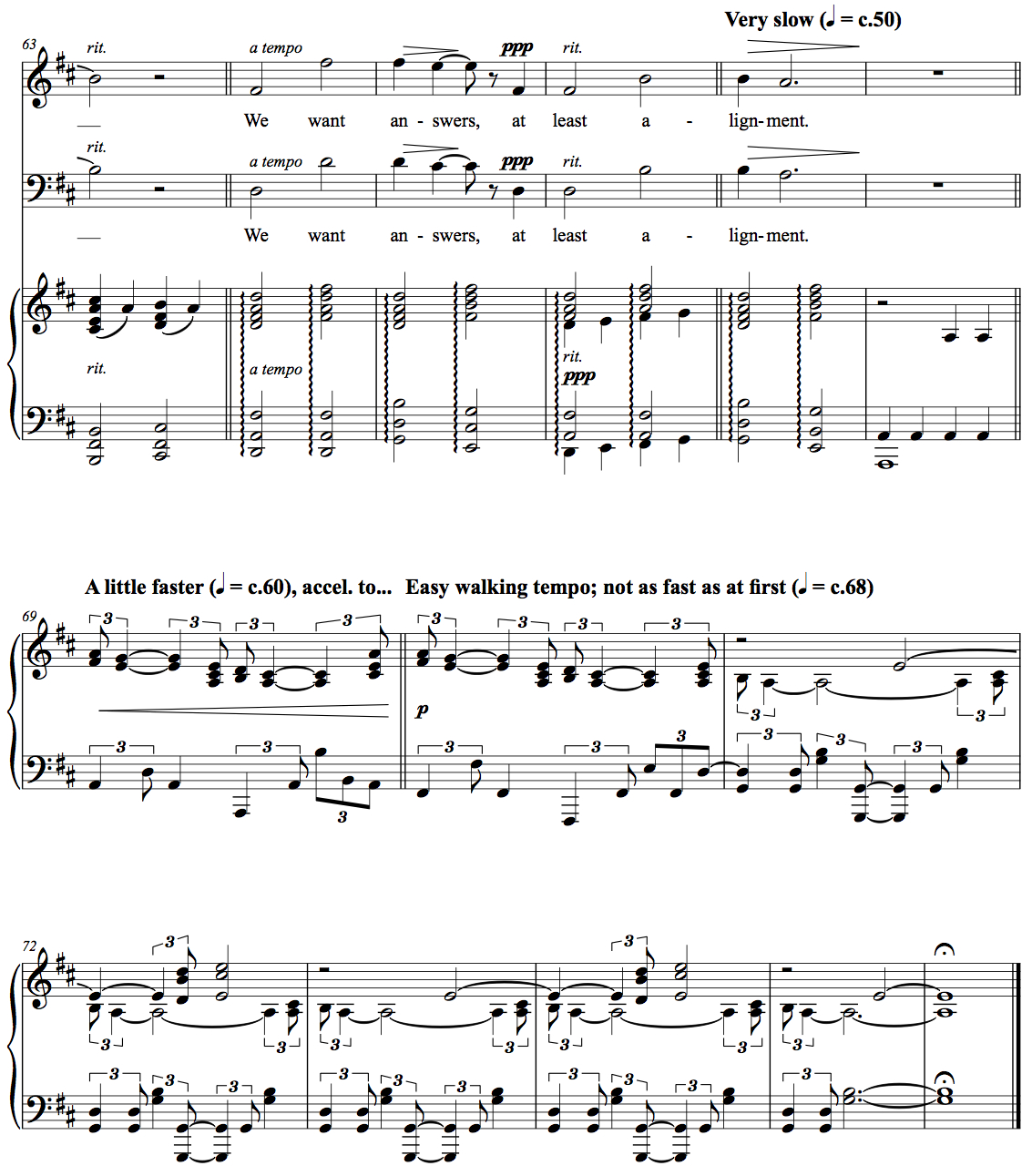 I used the duet/solos of #1, #6, and #11 a fourth time for the finale, #17, “Diary 3 / Like lost beads / Watermelon eyes” (1:07:00), when I worked a third poem in. I knew I was going to finish with “Diary 3” and that it was going to be a duet, but when I got to the end I thought about seeing if I could fit it into that first duet (and if I could stand hearing the music a fourth time). I tried it, and liked it. Some of “Diary 3” fits in at the beginning, during the “promenade” music, and then I extended the duet at the end with new music. For the very last bars, I repeat part of the promenade music, but bumped up a third from E dorian to G lydian. I felt that the echo of the “promenade” was a good place to finish, after the singers end in octaves on “We want answers, at least alignment.”

Here’s my take on the piece for the Broad Street Review.

Here are reviews of the premiere performances.

In This Blue Room
Although the poems are separated into three parts, the cycle should be sung without a break.

Let me tell you
leather-bound journal
spiral notebook
looseleaf sheet
about that one
sitting over there.

Deep
in a mug
and disconcerted
by indecipherable secrets
written in her own clear hand.

you should be
giving the directions.

Today is for
satisfying rest,
a festival of memories,
we know.

Part 2
6. Like lost beads (Donna Wolf-Palacio, 56). Baritone
Like lost beads
of a broken necklace,
images gather
in the corner
and unroll like ﬁlm.
In this blue room
shadows swallow
woven light
in a storm of straw
and slant
as if retrieval
were still possible.

7. Diary 1 (Donna Wolf-Palacio, Diaries), Mezzo-Soprano
What darkness
enfolds these planets?
Even happy dreams
bring worry.
We know that messenger
all too well.
He comes at darkness,
leaves by light.
He is as wide
as the ribbon of language.
On the other side,
more light.
The mask shows us
the gap of dying
in the details.
The immortal root
is holding up
the shadowy moon.

Dark green butterﬂies
free themselves from stems,
swim against the sky.

Among ﬂoating cells,
remnants: being held
and holding.
You lean to the side, tipping
with the undissolving world.

9. Wings (Julia Blumenreich, Angels), Mezzo-Soprano
On the 11th midnight-bluest evening
where clouds reshape as hardwoods,
an arch of eccentrically colored wingless parakeets
harmonize whatever the listener wishes to hear.

As if on cue
two angels with hair
the plumage of their missing wings
surf into magenta and crimson
the arteries and veins they used to know.

10. The Sleeves (Donna Wolf-Palacio, The Sleeves), Baritone
In mathematics,
even the invisible
breaks away.
The twin of this bridge
of pearls circles
like a tunnel
while whorls and spinning caves
ﬂoat out
to a ﬂoral sea.
The ﬁsh again.
The eye betrays us.
So many nets and shells
And bloated waters.
Two halves
between the lakes
of angel hair and seaweed.
Are we full yet?
This is wisdom.

Part 3
11. Like lost beads / Watermelon eyes (“Like lost beads,” Donna Wolf-Palacio, 56, “Watermelon eyes,” Siobhan Lyons, 56), Duet
Like lost beads
of a broken necklace,
images gather
in the corner
and unroll like ﬁlm.
In this blue room
shadows swallow
woven light
in a storm of straw
and slant
as if retrieval
were still possible.

Cobalt my thoughts surrounding
my swimming aquamarine scarf
my window painting the day.

13. Strata (Julia Blumenreich, Fossil Face), Baritone
The totality of fossils,
both discovered and undiscovered
how the orchard’s shadows marked
your face like a red-tailed hawk’s wingspan
careens across a pounding fury’s heart.

There is no escape just the
luxurious traces: four pine-green and blue spruce
mandalas in your hair,
one wide eye keeping score
while the stories gather mineralized,
footprints that return to stay.

She takes her sash to wrap her
famously queenly hairline,
until the wind
blows her view sideways while
a koi lifted from the pond just misses her.

On the other hand, galloping need
to kick up dust on an open plain,
stuck for a while by this folding in
of ﬂesh less impatient, contractions
letting loose with a tightening grip.

We’ll multiply everything by two
and ﬂip faces for pairs.

Do memories mean
we’re a match?

We want answers,
at least alignment.