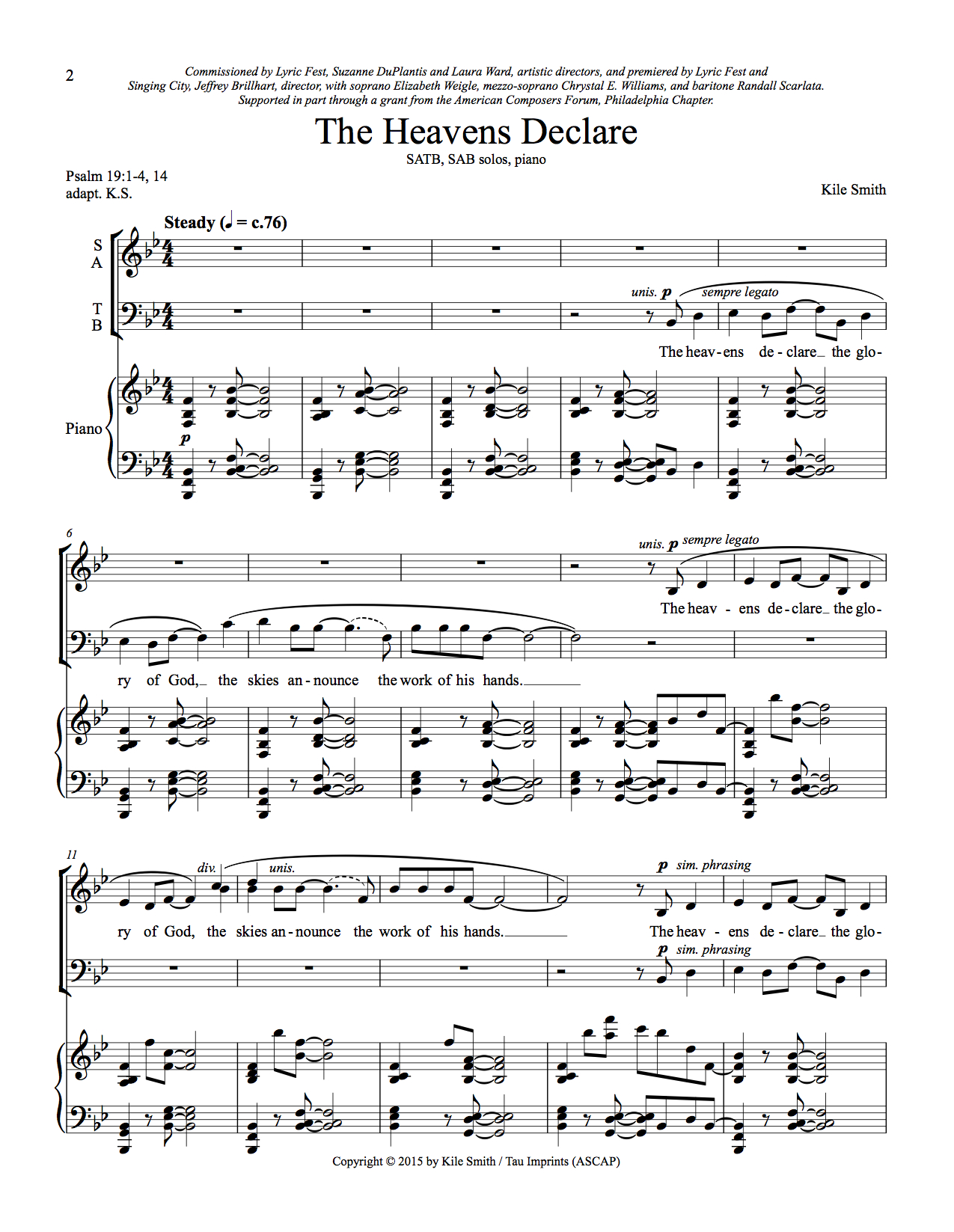 This was the final work of my 2014–15 residency with Lyric Fest, for a concert bringing Lyric Fest together with Singing City. The concert was inspired by James Weldon Johnson’s poem “The Creation,” exploring the gifts of the natural world, the art that reflects those gifts, and the bounty and need that live side-by-side in the 21st-century experience.

Because the Johnson poem is a retelling of the Genesis account of creation, I suggested a setting of Psalm 19 for the piece involving soloists, choir, and audience. I edited this down to the opening and closing verses of the psalm:

The heavens declare the glory of God, the skies announce the work of his hands.
Day after day they pour out their speech, night after night they tell what they know.
There is no speech, there are no words, their voice is not heard.
But their line goes out over all the earth; they proclaim to the ends of the world.

May the words of my mouth and the meditation of my heart be acceptable to you,
O LORD, my rock and my redeemer.
—Psalm 19:1-4, 14

My first attempts at composing this frustrated me as they usually do, the breakthrough being, this time, the simple slowing of the tempo down from what I first thought. That, and another (coincidental) look at the Fairfield Four on the Down from the Mountain video (the taping of the live concert with the O Brother, Where Art Thou? musicians) suggested a soundscape.

The refrain kept eluding me, however, until I realized that the “right” way to set it happened this time to be the “wrong” way; that is, some of the syllables (heav-ens, glo-ry) fall on the wrong beats. I kept trying to fix them, and they kept telling me to stop it. So I did, and they were fine.

Whittling the repeating chords down to their essence took a long while, but it allowed the inner voices of the chords to sing out.

My agnostic and atheist friends—those with whom I discuss such things, anyway—think it a silly notion that nature points to God. This piece, with its slow, low, halting refrain, acknowledges, I hope, their demurral, while stating my solidarity with the psalmist. But, in the well-known last verse, the connection of nature’s speech with our responsibility for our own speech is something I had never noticed before. I hope that The Heavens Declare makes that connection more obvious.

This can be performed in concert or in church, with soloists or small sections answering the choir, and with audience (or congregation)—the conductor may bring them in near the end—or without.