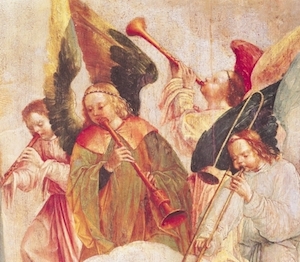 Many people wrote and spoke to me after my brother died. I learned how important it was to hear from people, to hear anything. Any word from a human being was important. That any word was helpful became apparent over the days and weeks because the first thing most people say, literally or in some variation, is this: “I don’t know what to say.”

We stumble over how to put a voice to our feelings when we’re confronted with the grief of another. This is right. We should stumble over what to say. The best thing to say to someone suffering may well be the first thing that comes to mind, which is what comes from the heart: “I don’t know what to say.”

This isn’t a regretted expression of helplessness, though. It’s a fact. We are helpless, and we share that. This is always true; tragedy simply reveals it.

The unimportance of importance

Throughout my years of becoming a composer, I now recognize, I struggled with an added burden. I wanted to be a composer, but I was trying to become an important composer. A few years ago, I stopped that. It wasn’t out of frustration; my music was being performed and (from what people told me) enjoyed. I just noticed that the pieces that worked—I mean, those that really hummed right out of the box, the ones that leaped into the audience—were…how shall I say this?…childish.

I’d prefer admitting to ″childlike,″ but I don’t mean that. There are innocent moments, to be sure, but I mean the simple, even stupidly simple bits of music, the na-na-na-na-na-na bits that just flat-out work, and work magnificently. When I noticed those, when I saw how well they took off, and most importantly, when I stopped trying to change them, it was a breakthrough for me. Whether anyone else noticed or not, I was entering an important phase of composing.

It was important because I stopped trying to be important.

Working out of order

In Vespers—which the Renaissance Band Piffaro commissioned as a project with the new-music choir The Crossing—the opening of the second movement was one such breakthrough moment. I composed that one-hour, 13-movement work out of order. The ninth movement, for voices alone, I wrote first, and I had a glorious time working out the 16-part voicing. Next came the first movement, which is mostly for recorders alone. I was starting to find my way into the Renaissance sound-world and means of expression, but I was still feeling my way through the piece.

I still hadn’t found the key into Vespers. I still didn’t know what to say.

And then came the second movement. It was to be a setting of the hymn “Wie schön leuchtet der Morgenstern” (“How fair and bright the morning star”). It had to be a big statement after the subdued introductory movement. I tried, and discarded, a number of attempts at this big statement.

It was no help knowing that in the J. S. Bach catalog of more than a thousand works, “Wie schön leuchtet,” his cantata setting of this exact hymn, is No. 1. That was, I admit it, a nagging elephant in the room. Everything I wrote sounded like bad Bach, and out of all the bad-fill-in-the-blank-famous-composer pieces you can write, bad Bach is the worst. Well, bad Bruckner…no, bad Bach is worse.

After a week of head-banging, I was still no closer to solving Vespers, when out of desperation I closed my eyes and tried to picture what would happen in the concert after that soft introduction. Ah: a blaring fanfare, and, aha, on the instrument which, out of the entire Piffaro instrumentarium, is the antithesis of the recorder: the shawm, the loud double-reed shawm. All those pictures of angels playing those long, straight wind instruments? Those are shawms. I came up, on the first try, with six utterly childish notes—na na na na na na—that a shawm would play as a fanfare.

Let me get back to that

I didn’t stop to think what marvelous transformation I could produce, because I used the notes as a bookmark, thinking that I would change them down the line. I simply overlapped the same notes onto a second shawm. Then I repeated the overlapped phrases, but with a couple of faster notes, and did it again with a couple more thrown in. The rest of the band punctuated, the singers came in on the hymn, and before I knew it—I was composing. And I never did change the notes.

I had solved Vespers. I stopped trying to be important, or wise, or Bach, and “Wie schön leuchtet” flew onto the page. The rest of Vespers followed.

On Memorial Day, we remember those who died for our country. We call it the greatest sacrifice, and that’s true even though the ones who died didn’t want to die, even for their country. It’s true especially because of that. They went ahead and did it anyway, even though nobody wants to die.

No, that’s not true: Some people want to die, some people take their own lives. To the ones they leave behind you say, “I don’t know what to say,” and the ones left behind nod, and look you in your eyes, and acknowledge the truth they hear from you. They know it, and they love you from all the way in, for your stumbling and for your saying something that’s not wise and not important.