My Dinner With Beethoven 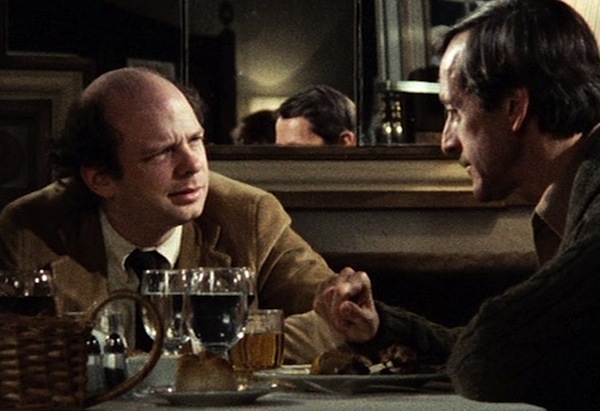 My belief in God, it turns out, is partly described by My Dinner with Andre. Wallace Shawn and Andre Gregory have dinner in a restaurant in the 1981 film. Mostly, Shawn listens incredulously as Gregory tells one tall tale of mystic coincidence after another. But one facet shines brighter than the entire movie to me. Periodically, someone brings food or clears a plate. At that point, the two friends do something that took me by surprise: They look at the server and smile. Every once in a while they say, “Thank you.” That is what I remember from My Dinner with Andre, and that, it turns out, is one description of my belief in God.

I’m sure I said “Thank you” to waiters before 1981, but, what with growing up with little money and then proceeding to undergraduate school, marriage, and graduate school with less than little money, I hadn’t the means to habitually develop restaurant mores. So when I saw two men on the big screen looking up and saying “Thank you” as if they meant it, I thought, This must be what culture is; this is good.

It shouldn’t have taken me into my 20s to learn this aspect of basic civility, because a few years before, in college, one of the jobs I had was parking lot attendant. Mostly I worked at a small lot that no longer exists, at 17th and Rittenhouse. There’s an apartment building there now; then, it was a busy postage stamp of a parking lot.

The boss’s rule was: The lot is never “full.” On Saturdays it was not unusual to stack the spaces on both sides two deep, and stuff the row between them with two lines, creating a perfectly gridlocked quilt of cars. When the lot was de facto if not de supervisor full, you’d park on sidewalks and in loading zones, keeping an eye out for police until you could work the cars back in.

You took keys and threaded needles with two-ton vehicles. You took money and gave change. You hoped that the customer’s estimated time of return was close to correct, and you hoped that the small bills would hold out. Your head was on a swivel. Most people, you found, were impatient. Most people—this was surprising—didn’t look at you. If someone said, “Thank you,” you remembered.

My Dinner with Andre brought this all back, so I started saying “Thank you” to waiters. I found that I couldn’t stop. I’ve been looking at and thanking postal workers, pilots, plumbers, and, especially, parking lot attendants ever since, each “Thank you” a hair-shirt reminder of how long it took to learn this.

The odd thing is, as natural as it now feels, it makes no sense to say “Thank you.” For a gift, yes, but not in these instances, where someone is paid to do something. My job was to park cars. I was paid (not much, but paid), to perform this function. Airline pilots and bus drivers make more than I do, but I thank them as well. A waiter is paid, a waiter is tipped, and still we look and thank.

There is no reason for it. We would excoriate the thought, if it occurred, to base our thanks on how much or how little the server makes. There is the ancient subservience of an inferior to a superior, and there is its opposite, noblesse oblige, but looking at and thanking a person is not either of those. We are simply obliged. We feel it, we say it. When the cashier hands us our receipt, we know it.

Which brings me back to God. Lyric Fest asked me to compose a work for the Singing City choir with soloists, piano, and audience participation, for a concert on the theme of the James Weldon Johnson poem “I’ll Make Me a World.” I set Psalm 19, The Heavens Declare, whichbegins, “The heavens declare the glory of God, the skies announce the work of his hands.”

Now, if I hadn’t read the work of clever fellows like Richard Dawkins, I would have heard it from a few of my clever friends, that the heavens declare no such thing. In my program notes for the piece I even alerted any atheists and agnostics that the “slow, low, halting refrain, acknowledges, I hope, their demurral” from the psalm. The skies don’t talk, an unbeliever would say, and on this point the psalmist actually agrees: “There is no speech, there are no words,” and nature “is not heard.”

Yet the declaration “goes out over all the earth; they proclaim to the ends of the world.” Dawkins ascribes such belief to idiocy or mental illness, but I think of it simply as halting my conversation every once in a while, looking up from the table, and saying “Thank you.”

I mean no disrespect to Dawkins to ponder (idiotically, I suppose) what must be his great frustration that, even after all his biology and all his books, something like 96 to 98 percent of the population disagrees with him. Most people, even smart people, even biologists and writers, believe in God simply by looking at the world.

And I mean no disrespect to God by comparing him, as I guess I am here, to a waiter. Make it chef if you like, but we know that the food doesn’t walk to the table by itself.

I don’t know if percentages count as Aquinian proof, but I’ll narrow it down. If I’m an idiot, then so was Beethoven. He sits across the table from me and tells his tall, mystical, Ninth Symphony tale of “Joy, beautiful spark of divinity.” I listen, incredulously. “Do you sense your Creator, o world? Seek Him above the canopy of stars!”

Beethoven stops talking, looks up at the waiter, and smiles like Andre Gregory. I, Shawn-like, compose The Heavens Declare.