On Discoveries from the Fleisher Collection, Saturday, August 1st, 5-6 pm. 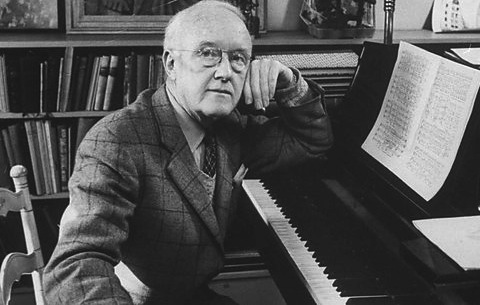 Alleluia is by far Randall Thompson’s best-known work; he is known overwhelmingly for his choral music, such as Frostiana and The Peaceable Kingdom. But Thompson also composed three symphonies, so we’ll get to know his symphonic writing on Discoveries.

From two works of his that are in the Fleisher Collection, we’ll hear the outer movements of Symphony No. 1 and all of Symphony No. 2. Both were composed early in his career, within a two-year span.

In two ways Randall Thompson exemplified the goal of the best in academia: thorough devotion to students by the passing on of a tradition of excellence, and a personal model of success in his field. The son of an English teacher, Thompson entered Harvard in 1916 after trying his hand at a few compositions.

There is an oft-told story that he auditioned for the choir, directed by the legendary Archibald T. Davison, and didn’t get in. “My life,” he would famously say later, “has been an attempt to strike back.” (There’s a good article on Randall Thompson in Harvard Magazine.)

Graduating from Harvard in 1920, he received his doctorate from the University of Rochester’s Eastman School of Music. Thompson went on to teach at Wellesley College, Berkeley, the Curtis Institute of Music—where he was its director from 1941 to ’42—the University of Virginia, and Princeton; in 1948, he returned to Harvard to teach. He chaired its music department from 1952 to 1957. In his career he taught harmony, counterpoint, music history, and choir, and in 1935 he even wrote a book on what should be taught, College Music.

He was, by all accounts, witty and well-loved. Composers who studied under him include those as different as Leonard Bernstein, Samuel Adler, Leo Kraft, Frederic Rzewski, and John Davison (who taught for many years at Haverford College). Thompson’s approach was always classical—to teach the tradition and the principles by which the masters governed their art. This may help to explain the balance and rigor exhibited by all his pieces, including these two symphonies.

Howard Hanson conducted the premiere of Symphony No. 1 with the Rochester Philharmonic Orchestra at Eastman in 1930, as part of Hanson’s seminal American Composers Concerts series. In 1932, Symphony No. 2 began life under the same auspices. Throughout the works, listen for the craft of the lines and the control of the emotional landscape. Randall Thompson sculpts the orchestra into a choir of voices, into a praise—an alleluia—of balance, reason, and beauty.