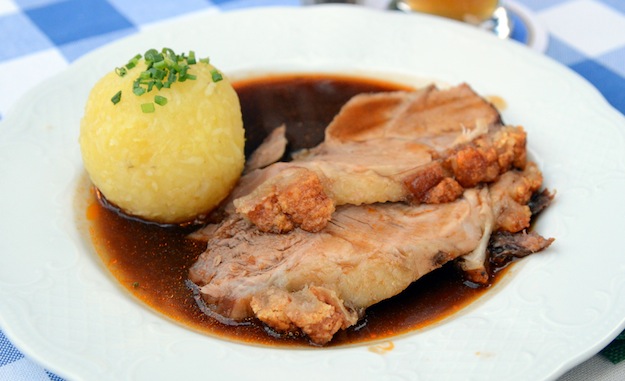 “I think there’s rice in this potato soup.” There were five of us at the table, but I was looking directly at Fred. “Ha!” he laughed. “Yes, yes, rice in the potato soup. We should tell the server. Ha!” It hit Fred again and we all chuckled. It wasn’t much of a joke, but it hit.

Joke-making is very like composition-making, but before I explain why, I must explain that my sortie into the soup was in Germany, from where my wife and I and two of our daughters just returned. Fred, the friend we accompanied, hails from there. He’s been an American for longer than I’ve been alive, but he was born and grew up in a region of the old East Germany we were visiting. At the first place we stopped, driving from the airport, we ordered lunch. It arrived with Knödel, potato dumplings.

Most Americans are not dumpling-savvy, but Fred noticed something different right away; mixed into the dough were bits of something else, similar in color and consistency to potato, but not exactly. Rice was mentioned by someone as a possibility. Fred guffawed: Rice would never be allowed in a potato dumpling, but when the server returned, Fred asked her what it was, and it couldn’t possibly be rice, could it?

Her eyes flashed. “Ne, ne, ne, ne, ne,” it was not Reis, never Reis, you don’t put Reis in dumplings. Fred smiled and reassured her that as to the dumpling platform he could be counted on firmly to support the anti-rice position, but that although these dumplings were delicious, they were unlike any he had come across.

She explained that (from what I could gather) it was just raw potato, grated, mixed into the finished dough before it’s rolled into dumplings and boiled. And, she added, that it was quite normal to make dumplings that way around here. We were all smiling, it was all freundlich, and we talked about it throughout the trip as one of those travel moments that stand out. So I used it as the springboard of my joke at dinner a day or two later.

Now, here’s the thing. If I’d said at dinner that the soup was terrible because there was rice in it, nobody would’ve laughed because it would have been wrong. The dumplings at lunch were good, after all. If I’d said the joke to the server at dinner, she would not have laughed because she had not been at lunch. If I’d ordered, say, Knödel mit Reis she would’ve stared at me, and my dinner companions would’ve squirmed. So the telling of a joke—even a small one—depends on lots of nuances. You have to say exactly the right thing to the right audience.

In comparing the making of music to the making of a joke, I’m not saying that music ought to be funny. The main sense of a sense of humor is funniness, of course, but the best comedians handle all the humors. Described as courage, anger, despondency, calmness, or what have you, these define us. If the humors remain untouched, we won’t get the joke and we won’t get the music.

I just completed an Agnus Dei for the Mendelssohn Club of Philadelphia. The new artistic director Paul Rardin asked for a work to complement Mozart’s Mass in C minor, left unfinished without an Agnus Dei. Mozart’s and my work will be performed on an October 18th concert. Leaving aside—or rather, because of—the unnerving spectacle of any music of mine being mentioned in any way with any music by Mozart, I wrestled solely with the opening for a long time. I came early to a feel of four chords which the choir would sing as “A-gnus De-i.”

But what chords? Strong, yes, but not pompous. Strong could also be inappropriate, as most settings of Agnus Dei (“Lamb of God”) are sweet. But I heard minor chords, loud and shouting, an imprecation almost, to take away the sin of the world and to grant us peace now. Not so angry, though, that one forgets one’s place.

Strong but appropriate; loud but not angry; minor but sweet: Emotions were running swift and confusing, like a river overflowing its banks. These are the times when a composer has to focus. I had four chords of four notes each (one for each of the choir’s voice parts), 16 notes that would determine the piece.

It took a while. A self-effacing A minor for the first chord, but with the third on the bottom, like it was standing on one foot. In the second chord, sopranos descend one note, the tenors retake the A, but the altos’ D adds the feel and color of slate. Chord three breaks through to A major or C-sharp something, I can’t tell, but just this side (it is fervently to be wished) of syrupy. The last chord lands on a real A major but again on one foot, and with the suspension of D against C-sharp it’s like a cool surf refreshing you on a hot day, with the salt water reminding you of the cut on your ankle.

I was mindless of music theory while thrashing these notes about, because I was looking for the exact humors that would fit these words, these emotions, this concert, this Mozart, this audience. Could these chords evoke these humors, and when they return in a different key at the end 13 minutes later, would they still reach the audience? Would they get it?

I hope so. I feel good about it, because, after all, I’ve been practicing. When I said “I think there’s rice in this potato soup,” and Fred laughed, I felt like a composer. Good thing, because it wasn’t much of a joke. But it hit.