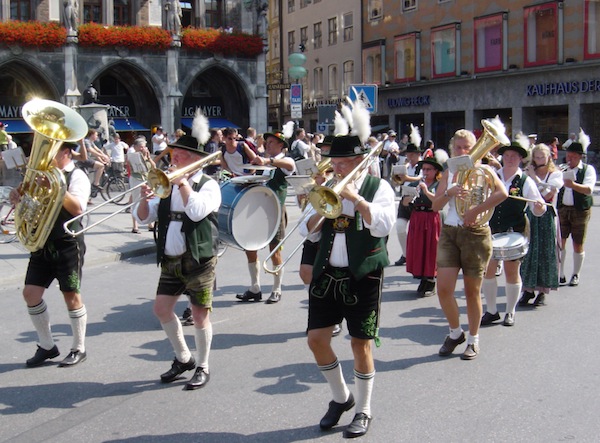 For instance, they never say “Happy Birthday” before the actual day, ever. They also don’t bring a birthday card. If you’re there, and they’re there, what’s the point of a card? I once asked a German friend if he gave a birthday card to his American wife. “Yes, yes,” he sighed, but leaning forward and raising his index finger he said, “but my heart is not in it.”

The first traveler doesn’t like anything anywhere else. You wonder why they travel, because whether it’s beds or restaurants, it’s just not right. Food is weird, service is slow, castles are smaller than the pictures, bathrooms are different.

Composers of the first type don’t like any other music but what is already comfortable. Other music is too intellectual or not intellectual enough. Exoticism is show, populism is vulgar, fast is lightweight, slow is morbid. Such composers write music of medium speed and medium volume. It doesn’t fall apart, and it doesn’t explode.

It’s better over there

The second kind of traveler doesn’t like anything here. Mountains, cathedrals, rivers, and roads are all better over there, so you wonder why they don’t just stay there. Foreigners solved problems Americans never figured out (like how to keep roads clean) and they’re more relaxed.

The second composer type is never happier but when discovering a musical technique no one else (or no one close by) has. It usually involves numbers or systems or a new way of performing, but it has to be faster or slower or wilder. It is usually unexplainable. Such composers then insist on explaining it.

The meaning of potato salad

With traveling, look at it this way. Germany invented Oktoberfest and knows when to celebrate it, but America is festooned with Oktoberfests from Labor Day to November. Oktoberfest here means parades and events and dignitaries, every one of which is stuffed (the Oktoberfest, that is) with beer and sausages and sauerkraut and German potato salad.

Then there’s the Autobahn. It’s not true that it has no speed limit. There are speed limits all over: 50 and 70 and 130 kmh and To Infinity and Beyond. It’s confusing, since the speeds are not mph, and also because of relentless signage such as Strasse Schämen, which means, as best as I can tell, “We are ashamed of the road you are about to see,” but it’s just as immaculate as every other square inch of road in Germany.

So, including the requisite stop for coffee and cake, Germans can get from the North Sea to Switzerland in about 23 minutes. Which is why Switzerland built a big wall called the Alps. So you see, the Autobahn is better but not better at the same time, because for one thing you can’t see the country at that speed, and for another, nobody likes crashing into the Alps. So it’s better just to let me drive.

At home, at Oktoberfests at the Canstatter in Northeast Philly or the Vereinigung Erzgebirge in Warminster or the Steuben Day Parade in Fox Chase or New York, you’ll see women in Pauli-Girl dresses and 17- and 77-year-old men in little hats with feathers. Men in leather pants stomp and slap their feet and thighs and spin women around in the traditional Schuhplattler, which is German for “yoga.”

Here or abroad, at the Munich Hofbräuhaus or in Northeast Philadelphia, be None of the Above. You’ll sit at long tables and talk to people you never knew before, even if you see them all the time. You’ll meet a white-haired saxophonist with a thick German accent who learned to play jazz in Trenton in 1943 — yes (after a double-take) in 1943 — when he was a prisoner of war, playing for U.S.O. dances. You’ll learn a better way to make potato salad or a better way to plant potatoes; you’ll figure out, after five minutes with five Germans, the word for “groundhog”; you’ll meet someone who built the Walt Whitman Bridge. Somebody’s cousin turns out to be hilarious. You’ll do that yell they do during German yoga.

And that, for composers, is the point. As a None of the Above, your eyes and ears are always open; both the different and the same will surprise you.

Four hours or four days later you’ll come home from a park or another country and say it was the best time you ever had.