On Discoveries from the Fleisher Collection, Saturday, November 14th, 5 to 6 pm (2nd Saturday this month!) 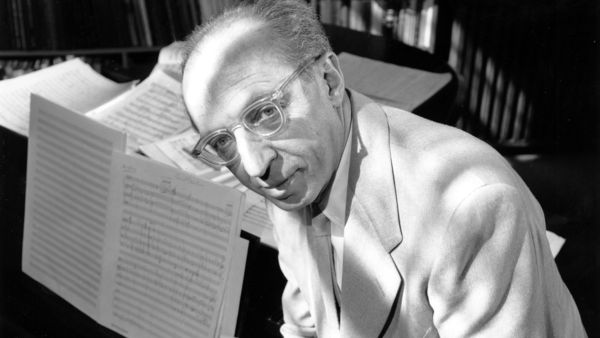 There are those who dislike speaking of greatness, either because they are uncomfortable with things that are great or with things that can be measured. But most of us acknowledge that things, people, music, and even composers can be great, and so, by just about any measure, most people would acknowledge that the great American composer is Aaron Copland. November 14, 2015, would be his 115th birthday.

His years, nicely rounded for remembering, span 1900 to 1990. They neatly illuminate his standing as the pre-eminent composer in the United States during the 20th century. All we have to do is scan a list of his works to see not only how many are continually performed, but how they have defined what is “American” in American music. Appalachian Spring, Billy the Kid, Rodeo, El Salón México, Old American Songs, Lincoln Portrait, the Third Symphony, Fanfare for the Common Man, film scores, and chamber works all attest to his importance as the composer above all others who would rightly be called the Dean of American Composers.

The irony of the son of Jewish Lithuanian immigrants in Brooklyn becoming this bellwether of Americana has often been noted. That Copland was the most famous of the Americans who flocked to Paris for studies with Nadia Boulanger is also well known. What is not as familiar is the music he wrote even in Paris—ballet music that he worked into the Dance Symphony. We can hear him toying with the jazz language of the ’20s in this. It’s an element that would fade, but not disappear, from his composing toolkit. Leopold Stokowski gave the first performance of it in 1931 with the Philadelphia Orchestra, on a benefit concert for out-of-work musicians.

Dance Symphony is not one of his numbered symphonies, but the Short Symphony is actually No. 2. The Mexican composer/conductor Carlos Chávez gave the first performance with the Mexico Symphony Orchestra in 1934. (Chávez would also premiere El Salón México three years later.)

Benny Goodman, the huge entertainer of the 1930s and ’40s, commissioned Copland for a concerto, and he answered with one of the most delightful works of his career. Goodman was a highly respected musician beyond jazz and swing, and Copland presented him with a brilliant piece for the clarinet repertoire.

Our show begins with music Copland submitted for a project of 10 fanfares commissioned during the war by Eugene Goossens, conductor of the Cincinnati Symphony Orchestra. The music is ubiquitous, but let the Fanfare for the Common Man be a blazing reminder of the power, the individuality, the scope, and, yes, the greatness of Aaron Copland.