The Acceptance of Samuel Barber

On Discoveries from the Fleisher Collection, Saturday, December 5th, 5 to 6 pm 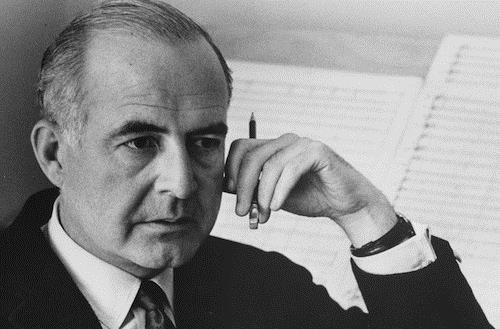 He was awarded, and accepted, and acquainted with success. Samuel Barber had so much success that it might be more proper to say that he endured, rather than enjoyed it. Donal Henahan wrote in his New York Times obituary of the composer, “Samuel Barber was hounded by success. Probably no other American composer has ever enjoyed such early, such persistent and such long-lasting acclaim.”

Barber entered the Curtis Institute at age 14 and was an immediate star in piano, voice, and composition, for which his works soon began turning heads. He wrote the Overture to The School for Scandal when he was 21, and it immediately entered (and remains in) the repertoire. Adagio for Strings overwhelmed the classical world a few years later. He won a Guggenheim Fellowship, the American Prix de Rome, and—among many other prizes—two Pulitzers, including one for the grand opera Vanessa, premiered by the Metropolitan Opera for its 1958 season.

But Barber reportedly battled depression throughout his life, made worse by the extensive critical and public coolness to Antony and Cleopatra, which opened the Met’s new hall in 1966. Yet his life was a procession of one high-profile commission after another.

He composed Toccata Festiva for the installation of a new organ at the Academy of Music, Eugene Ormandy conducting the premiere with the Philadelphia Orchestra in 1960. Barber opened Pittsburgh’s new Heinz Hall in 1971 with the James Joyce–inspired Fadograph of a Yestern Scene. There’s no program to the piece, but the title—from Joyce’s Finnegans Wake—may be a swipe at putatively progressive critics who thought his music to be, in that oft-used yet meaningless phrase, behind the times.

But Barber could be au courant if he wanted: He wrote the Capricorn Concerto in a modernistic, neoclassic language while he was still in the army. He combined flute, oboe, trumpet, and strings in the form of a concerto grosso.

With Knoxville: Summer of 1915, however—drawing on words from James Agee’s novel A Death in the Family—we come to the essence of Samuel Barber’s musical gifts. It is full of human warmth, a genius that cannot be manufactured. In Knoxville, style fades in the presence of musical substance. From this work it is easy to see the reason for all the awards and all the acclaim and all the success.

We hope that he could look on Knoxville: Summer of 1915 and feel that which the world kept offering him, but which he apparently had so such trouble accepting: acceptance.