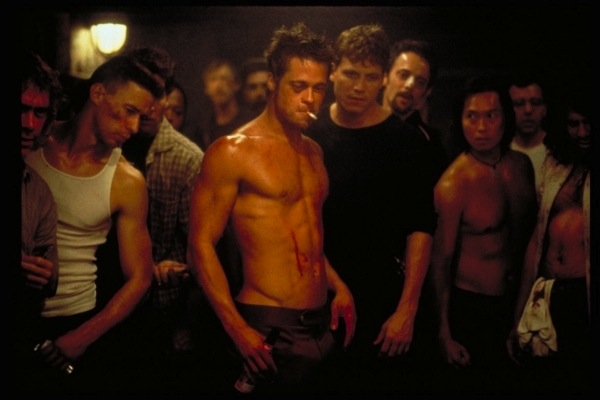 The first thing I noticed was his bare torso, the shirt ripped off, his large belly expanding and tightening as he bellowed. Two men held him from behind. One in front, leaning into him with extended arms and locked elbows, grabbed his shoulders. They were his friends, trying to calm him down with “C’mon, man,” and “It’s not worth it,” spoken at his face and into his ear.

Out of the depths have I cried unto thee, O Lord

He was having none of it. “Right now! Right here! With all your friends! I will break—you in half—you—mother—” he yelled, peppering his howl with every curse in his repertoire, cycling through them one by one. His target was a man in a clutch of men 15 feet away.

We were in a local establishment, usually a quiet place. Everybody knows each other here. “Mike!” (not his real name) the bartender yelled at him. “Mike! Stop it!” She tried to get his attention. “Mike! Mike!”

Lord, hear my voice: let thine ears be attentive to the voice of my supplications

He ignored her and his friends, trying, in fits and starts, to lunge at his target. He was a downed wire, sparking, fuming, spitting, ready to kill something. “I will break—your—neck!” His voice—in that brass report that caroms off the top of your throat and through your skull, part Braveheart, part Olympic hammer thrower—pummeled the air as if it were a heavy punching bag.

If thou, Lord, shouldest mark iniquities, O Lord, who shall stand?

From our group, my buddy, let’s call him B, looked over. Without hesitating he got up from his chair, walked toward the space left by the crowd’s quick dividing, glided up to the edge of it, and wedged himself in, through the spectators and Mike’s people and the guy’s people.

They made way. And he stood at the edge of the space.

But there is forgiveness with thee, that thou mayest be feared

B’s arms are as big around as Mike’s legs. B’s legs are dock pilings, his back and shoulders a jetty. But he had moved to that spot so quickly, and had inserted himself so quietly, that it was a moment before I had realized what he’d done.

He just stood there. He did not face Mike. He did not cross his arms, he did not put his hands on his hips, he did not stick out his elbows. His arms hung, and he stood, casually, like he was reading the headline on a newspaper that had dropped to the floor.

B’s stance drew no attention to itself, but B had placed himself in the exact spot that was in the way. If Mike’s friends let go, Mike would have to go through B to get to the guy.

I wait for the Lord, my soul doth wait, and in his word do I hope

In tai chi, they talk about stepping as if your legs extend six feet into the ground. If you visualize as you move, your feet become both lighter and more determined. It is commitment and detachment at the same time.

Six feet, I recall, is the depth we are buried at. It’s as if taking steps is a matter of life and death. No. Taking steps is death; you are stepping from your death, from where you will end up, from where we all end up. Every move is energized by—every step lives from, you might say—its rootedness in the awareness of death.

I was composing a setting of Psalm 130 for Bryn Mawr Presbyterian Church, to be sung in the spring. It’s the De profundis or “Out of the depths” psalm. I hadn’t finished it, but was getting close. I felt good with what I had written, as it had progressed from terrible—where all pieces start—to okay to good. But it was just good, and I felt—just—good. Maybe it needed more heat, deeper “depths” from which to bellow. But everything I threw at it sounded fake, sounded like posing.

I say, more than they that watch for the morning

I was trying, in a word, to be Mike, whose cries, it turns out, were not all that deep. When he left, trailing more curses, you could hear him complaining to his friends, “He did the same thing last year—he thinks he can get away with it!” and just like that he was a melodrama. His cause may have been just, but he was whining.

Let Israel hope in the Lord: for with the Lord there is mercy, and with him is plenteous redemption

And my mind turned to B, who had just stood there, and whose standing there nicely coincided with a subtle change in Mike’s passion. Mike kept yelling, but he struggled less. He wasn’t quite lunging against his friends to break free. He would have to go through B to get to the guy, and now it didn’t seem as necessary to get there. Maybe the thought dawned on Mike that—what I knew and what everyone else there knew—no matter what, he was not going to get through B.

And he shall redeem Israel from all his iniquities

And so I relaxed, and what I had written, I let stand. Oh, I closed some things up, knit up the voices better. And because of that, I was able to lighten some things later on. The piece was rooted deep and that allowed the music to move quickly and lightly. It’s strong now, but doesn’t bellow. The music won’t call attention to itself, and that’s just how I like it. And B just walked back to his chair, and that was that.