On Discoveries from the Fleisher Collection, Saturday, February 6th, 5-6 pm… 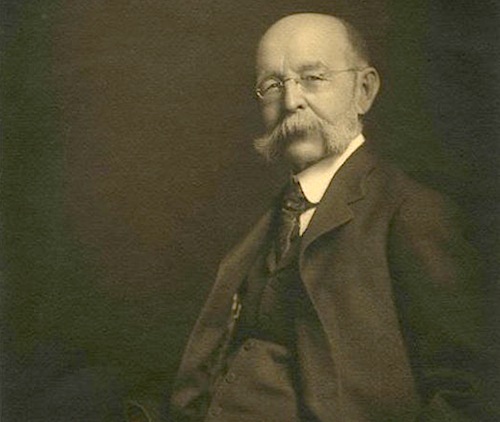 If it’s a small world, then the 19th-century world of American classical music was tiny. Last month we looked at George Frederick Bristow of New York, the first native-born composer to get a hearing from that new American institution, the symphony orchestra. Now we meet John Knowles Paine—for the second time; we heard his music on another Discoveries eight years ago.

He was born in Portland, Maine in 1839. A few years younger than Bristow, he would become the first American composer to have real success in orchestral music. He settled in Boston, after lessons in his hometown and further studies in Germany.

American composers would begin to find their way to Germany for training, then return. Not only was Germany renowned for its musical opportunities, but many accomplished German musicians had been immigrating to America because of the 1848–49 political upheavals. It was unwitting but efficient advertising for German training.

Paine became the first professor of music in the United States, at Harvard, after fame in Boston for his composing, organ playing, and musical learning. He taught music classes—at first, for free—and his organized approach became the backbone of Harvard’s new music school, as well as a model for college programs elsewhere. Among many other accomplishments, he was a founder of the American Guild of Organists.

When Harvard students put on the Sophocles play Oedipus Tyrannus, Paine wrote incidental music for it, including the strong Prelude we’ll hear today. The production was sold out (fairly remarkable considering that they gave the play in Greek) and even traveled to New York. Paine’s second Symphony, “In the Spring,” was conducted in Cambridge by Theodore Thomas, a pioneering American conductor and violinist. He had moved to America in 1849 from his native Germany and played in the orchestra of Jullien, whom we met last month in connection to Bristow and Philadelphia’s William Henry Fry.

In Fry’s opera orchestra was another German, trying to make a living with his Dresden friends. They called themselves the Saxonia Band and had left Germany, yes, in 1848. Hermann Kotzschmar was a composer and organist who eventually set up shop in a small New England city. A local businessman and amateur musician, Cyrus Curtis, housed him his first year. The family adored Kotzschmar so much that they named their first son Cyrus Hermann Kotzschmar Curtis.

That son would earn a publishing fortune in the industry’s center of Philadelphia. He helped the new Philadelphia Orchestra, arising from a Germania Orchestra (founded, indeed, in 1848) to get on its feet. His daughter, Mary Louise Curtis Bok, founded the Curtis Institute of Music.

Oh, the town Kotschmar had settled in? That would be Portland, Maine. His star pupil in organ and composition was—well, you’ve guessed it already: John Knowles Paine.