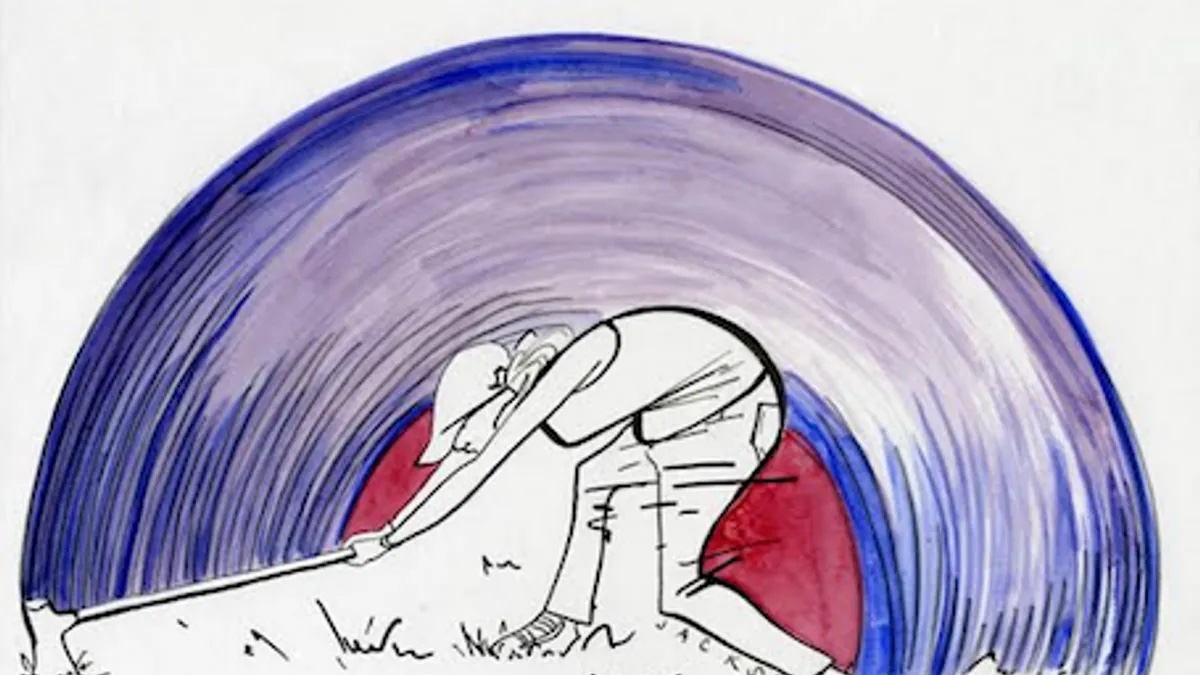 And the beat goes on. (Illustration for BSR by Mike Jackson of alrightmike.com)

There was work to be done at the top of the cedar, beaten by storms, and on the still-grand oak, but the main business for the professionals was the two flowering pear trees in the side yard. Those they took down to the ground.

I had planted them, just sticks, 15 years ago. They grew past the promised 30’ high and 30’ wide and kept going, into our house, into the neighbors’. I’d get into them every year with the pole saw but it became too much. So they’re gone. We’ll miss the shade, but it’s the north side, so to the ferns and butterfly bushes we’ll add wildflowers and, I don’t know, maybe a walk, just individual flagstones winding through.

The first cut is the deepest

But first, the surface roots, springing suckers all over. I took the digging shovel, the loppers, and the splitting maul from the shed. To make room for flower and vegetable gardens over the years I’ve yanked out 40 feet of privet hedge in the front, another 50 on the side, and mostly-dead japonicas and muscular, stubborn yews, all with these tools.

The splitting maul is the horse, a magnificently brutal instrument, half a sledgehammer and half an axe. Expose the root with the shovel, grab the maul, and have at it. The loppers get the finger-sized secondary roots that gnarl into the dirt, but the maul is the main event.

Sharpen it to give it bite, then lift it and drop it. Let it do the work. Give a little ictus, like a conductor bouncing the baton at the bottom of the beat, but give from your feet, and just a little. If you force it, you’ll be on a knee sucking wind in 90 seconds. Plus, forcing makes you miss, which you wouldn’t think matters since this isn’t brain surgery, but matters in a hurry if the wrong angle makes it ricochet. You don’t want to ricochet a splitting maul.

Thwack! The white flesh of the root reveals itself. Thwack! Wood chips and dirt fly. Thwack! Your body aligns, you breathe, and you remember tunes. The sweat comes. Thwack! “Hot town, summer in the city / Back of my neck getting dirty and gritty.”

Thwack. The root moves. You bend down and feel in the dirt for where to hit next. Sweat overcomes an eyebrow and drops, stinging an eye. You wipe your wet face and forehead with the bottom of your t-shirt. The beating heart and dit-dit-dit-dit of “I Think We’re Alone Now” comes, Tommy James and the Shondells. Groups sounding like they recorded at a party: Sam the Sham and the Pharaohs, Mitch Ryder and the Detroit Wheels, silly but earnest, uncaringly out of tune.

The chord that cut you then

Your favorite may be “You Were On My Mind,” the We Five. Bup-bup, “When I woke up this morning…” bup-bup-bup-bup-bup-bup… then, here it comes. “I got troubles, whoa-oh”: That one rhythm chord, right there, resolved and unresolved at the same time, the three burrowing into the four, the mi with the fa. That’s the chord that cut you then, and still you’re a sucker for it; how many times have you used that chord?

You chuckle, wipe more sweat, then stand and slowly straighten your back.

Thwack. The largo opening to “Let’s Hang On,” the Four Seasons. Brilliant songs, Burt Bacharach / Dionne Warwick, “Say a Little Prayer”; bleeding songs, Glen Campbell / Jimmy Webb, “Wichita Lineman,” “Galveston.” “What the World Needs Now,” Bacharach again, the Jackie DeShannon version, with, of all things, a solo on…that’s got to be a euphonium. A euphonium, are you kidding.

Even swing vines itself into the ’60s. “I Love You More Today than Yesterday”—you won’t hear a better kick-drum. “It’s Not Unusual” from helden-throated Tom Jones. “Hot Fun in the Summertime” from that most righteous band, Sly and the Family Stone. Thwack.

The note you would always sing

Over an hour and you don’t know how much more you’ve got in you, in the sun. The roots metaphor is not lost on you, but these, you’re tearing these from the ground. The songs? You only wonder why some stuck, and why they’re in your music, because, admit it, they are.

The Left Banke and the keening “Walk Away Renée” (strings, oboe, harpsichord—what was it with harpsichords then?). It always, always catches you in the throat with those backup harmonies—how you adore backup harmonies—that move, of course, in the pop lingua franca of parallel motion, except for that one note holding on for dear life through each chord-change. That’s the note you would always sing. And she always walked away.

And oh, the Association, stealing the words out of your nine-year-old head and singing “Cherish” out loud in front of everyone: “You don’t know how many time I’ve wished….” Lyrics exegeting your growing rage at a hole in the language you’d learn only later had already been filled, long ago, by troubadours: unrequited.

Thwack. One more. Thwack. The last root finally yields; you rip it up and toss it to the pile. Good thing, too, because you’re done in. Covered in sweat, you lay the splitting maul on the ground by the fence. You scrape dirt back into the scars you dug and hacked, and press them smooth with your feet.

You hold the hose over your neck, over your head. You hold it into your face and move it to your mouth and drink from it, like when you were a kid. You put it down and smile because you know the names of chords now, don’t you, but you still don’t know why one chord from the We Five cuts you in two.

But you do know more—more music, more words—and you’ve grown past nine and have kept going. You look around. You think, yes, you will put flagstones here, a walk winding through.