Standing for the national anthem 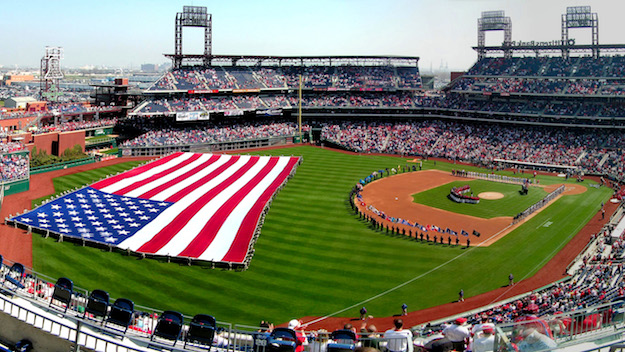 There’s controversy around the national anthem, but all I’m thinking about is my low E-flat. Our ad hoc men’s choir is about to sing “The Star-Spangled Banner” for the Phillies. There aren’t that many of us second basses, so that E-flat, the lowest note in the arrangement, is foremost on my mind as I stand in the chute leading onto the field.

I’ve had that E-flat and lower, sort of, since high school, but the older I get, the more solid those notes are, especially in the morning. That’s in my favor.

But this is early afternoon. It’s outside and a little cold; my low notes evaporate if I’ve been talking a lot. And (I should’ve mentioned this first), since I’m not a trained singer, I have little technique. To keep warm, I have a heavy white undershirt under my heaviest white dress shirt (with black pants and shoes, our uniform), and I haven’t talked much all day.

It’s October first, the last Saturday of the regular season, Phillies vs. the Mets, and it’s German-American Day at the stadium. We cobbled the choir together from the German men’s and the ecumenical choirs I sing with, plus more guys who wanted in. We’re led by my wife Jackie; she’s also the director of both choirs.

Nearby, Temple is playing football, and the Police and Fire Department Thrill Show is raising college tuition for children of parents killed in the line of duty. We plan plenty of time to get to the stadium, and arrive two hours early. Congregating near the right-field gate, we see lots of Mets fans enter. The Mets were fighting for a playoff spot; the Phils were never in the race. Ryan Howard, the slugging first baseman well past his most-feared hitting days, is playing his last weekend as a Phillie.

A guard leads us down the entrance ramp. Below the stadium we walk, past forklifts, water and electrical conduits, locker rooms, and skids of grass seed. Staff members glance at us. The Phanatic sashays up to us, rubs a bald guy’s head, gives us two thumbs up.

In a large, carpeted locker room where we can keep our things, Jackie reminds us of the two places we are not to breathe: After “what so proudly we hailed,” and after “bombs bursting in air.” We run the music a few times, softly.

We head to the staging area at field level, and hear the crowd and the echoing stadium announcements. Through the chute we see players warming up on the field. “This is where the Mets will celebrate, today or tomorrow” our guard says confidently. “Gonna be champagne all over, we cover everything in plastic.”

We get into singing formation. I’m in the second of two rows, on the end, so it turns out I will lead us in. We line up in the chute. I quietly test my E-flat, seeing how it feels. Then I tell myself to knock it off.

We wait. The Phillies honor four or five different groups. Somebody hands somebody else a large posterboard check. A little kid is dressed as the Phanatic. A tech guy sets up our microphones. The Phanatic goofs around. Somebody throws a ceremonial first pitch. In front of me another tech guy, talking on his headset, looks over to me and says, “Okay, now.”

I walk up a few steps and onto the field. We’re on the third-base line, next to the Mets dugout. The dirt crunches under my black dress shoes. The grass, as beautiful up close as it is from the stands, is a lively green and feels strong. Taking my place, I look at my black shoes against the green grass. I look at the guys and I look at Jackie. I look into the stands in front of me and see nothing but blue shirts. They’re all Mets fans.

Jackie sings our first three notes, and we launch into it at a good clip, in unison, “Oh, say, can you see….” We were warned about the echoes. They are loud and will throw you off. Following the conductor is always recommended; here, it is essential.

This is the only national anthem that’s a question. Will the flag still be there? That’s it. That flag we saw yesterday, before the night and the bombs fell, in this land of the free and the brave, is it still there?

We break into four parts at “proudly we hailed,” and it is an exciting moment but I do not breathe. We carry over into “at the twilight’s last gleaming.”

Do we see the flag?: That’s the anthem and that’s the controversy. Maybe some see only the American flag and not American imperfections, and maybe some see only the imperfections and not the flag. But don’t most of us realize that it’s both? Hasn’t it always been both? Haven’t we always imperfectly lived out the idea of America? Isn’t America, above all, an idea? Haven’t we always been a question, just like our anthem?

So I sing, and so I stand. Knowing the imperfections, I stand for the idea. With my imperfect voice I stand for all who made the idea possible, and for all who still make it possible, for Jackie, for my family, for the Thrill Show and their families, for the guys I’m singing with, for the kid in the Phanatic costume, for the Phillies, for the Mets fans, for everyone standing, for protestors taking a knee, for all. I stand and sing for America.

We finish big and the crowd roars. Mets fans in front of us pump fists into the air. As we file out, high-fiving them on the way into the chute, some lean over the railing and say, “Thank you.”

Ryan Howard hits a home run later, but the Mets win, 5–3. I have no idea how my E-flat went. It comes near the end, on the word “free.”